As Britain faces its worst recession in 300 years, the Bank of England will be hoping to use its two-day policy meeting on June 17-18 to inject another dose of stimulus into the ailing UK economy. After the bigger-than-expected plunge in GDP in April, the Bank is almost certain to announce a large increase in its asset purchases on Thursday at 11:00 GMT. But with Brexit once again rearing its ugly head, policymakers’ determination to keep the economy afloat may do little to steady the jittery British pound.

Economic activity came to a standstill in April

The UK economy contracted by a staggering 20.4% month-on-month in April as the coronavirus lockdown brought the country to a near standstill. Other European economies suffered a similar fall in output. But with the government’s initial botched response largely to blame for Britain becoming one of the worst hit countries of the COVID-19 outbreak and Prime Minister Boris Johnson subsequently being under pressure to bring the virus under control, the UK is emerging from the shutdowns at a much more gradual pace. This can only translate to a slower recovery and deeper economic pain compared to many other Western nations. 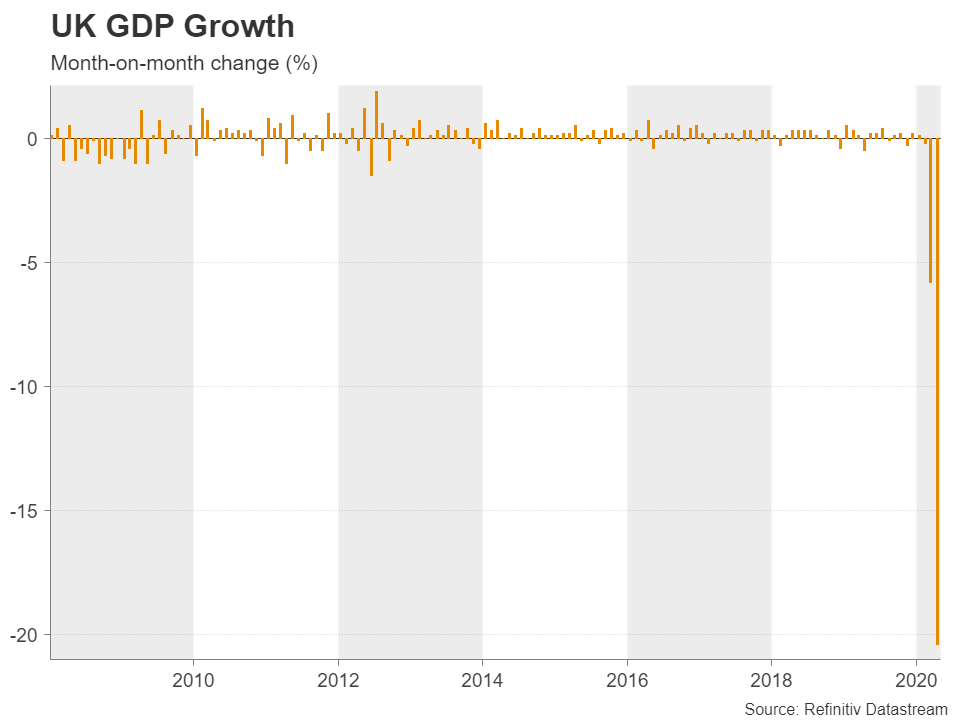 It’s no wonder therefore that the Bank of England has been hinting at more stimulus. Speaking last week, Governor Andrew Bailey said the Bank was “ready to take action”, as policymakers worry about the long-term economic damage from the virus crisis. Moreover, Britain’s burgeoning budget deficit means there will be no shortage of new gilt issuance in the coming months and at the current rate of purchases, the £200 billion that the BoE added to its quantitative easing (QE) program in March will be depleted in the next few weeks.

Most analysts now expect the Bank to announce an additional £100 billion to its arsenal, which would take total purchases to £745 billion. However, there is growing speculation the BoE will opt for a larger increase of £150 billion, following the dire April GDP reading. 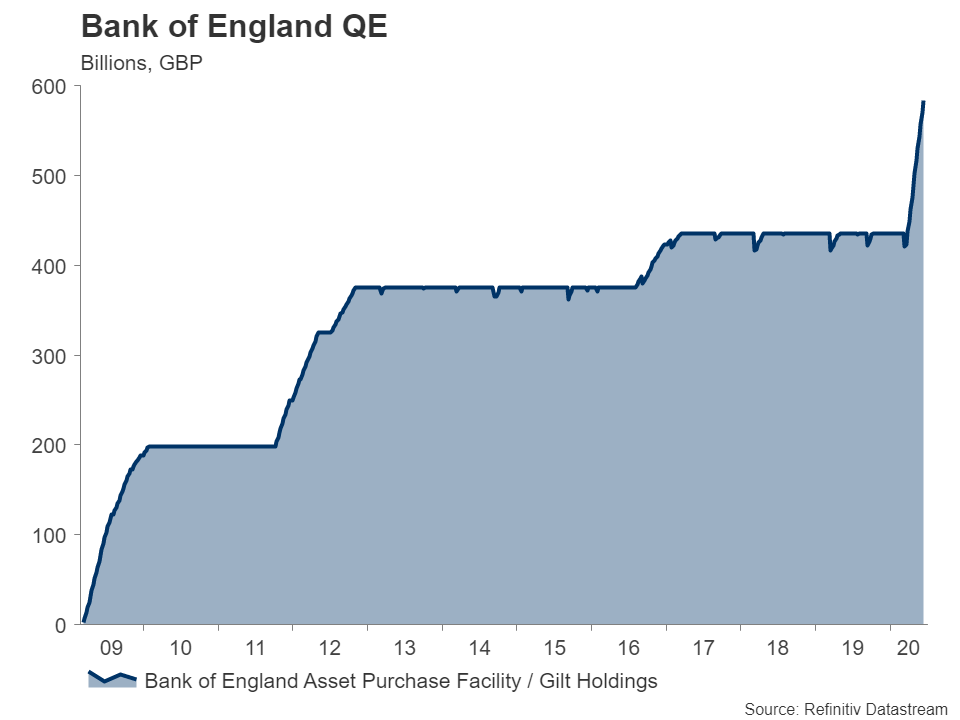 A bigger-than-expected stimulus could help the pound build a support zone between its 50-day moving average around $1.2415 and the 61.8% Fibonacci retracement of $1.2513 taken from the March slide. However, any upside move is likely to once again face resistance near the 78.6% Fibonacci of $1.2815 where the latest bullish stretch peaked last week.

If the BoE meeting fails to cause much excitement, traders can look to Friday’s retail sales figures (due at 6:00 GMT) for fresh clues on whether a recovery got underway in May. UK retail sales posted a record fall in April, plummeting by 18.1% m/m. They are forecast to have bounced back slightly, by 5.7% in May. However, given that non-essential stores in the UK only opened their doors this week, a smaller-than-anticipated rebound is more likely than not.

Should the retail sales data amplify concerns of a slow recovery, the pound could slip back towards the $1.23 area, marked by the 50% Fibonacci.

Ultimately, however, although the data and the BoE meeting do matter, the pound will continue to take its cues primarily from the broader market risk tone, as well as of course, from the state of the Brexit talks. Britain and the EU have this week agreed to intensify negotiations on a post-Brexit trade deal. But with time fast running out and the two sides remaining intransigent, traders may soon begin to price in a disorderly exit in the absence of a major breakthrough, clouding the pound’s outlook just as the economy starts to get back on its feet from the virus turmoil.