Bank of Japan: Yen at the mercy of global forces – Forex News Preview

The BoJ is expected to take no action when it concludes its meeting early on Thursday, despite an escalating covid outbreak and a deflationary storm hitting Japan. In fact, some reports suggest the BoJ is considering scaling back some of its ultra-aggressive policies, but admittedly, this is not the time to be discussing an exit. As for the yen, its fate hangs on how global bond yields and risk sentiment develop, so US stimulus news may be the most crucial element.

In contrast to most nations, Japan never entered a full-on lockdown. The government can legally only advise people to stay at home and businesses to close, it cannot force them. But the global health crisis has still left its marks on the world’s third-largest economy.

A state of emergency was recently declared for several major regions, including the capital of Tokyo, Osaka, and Kyoto. Travel restrictions are in place and the government is urging people to avoid non-essential outings, something that most Japanese citizens fortunately comply with. 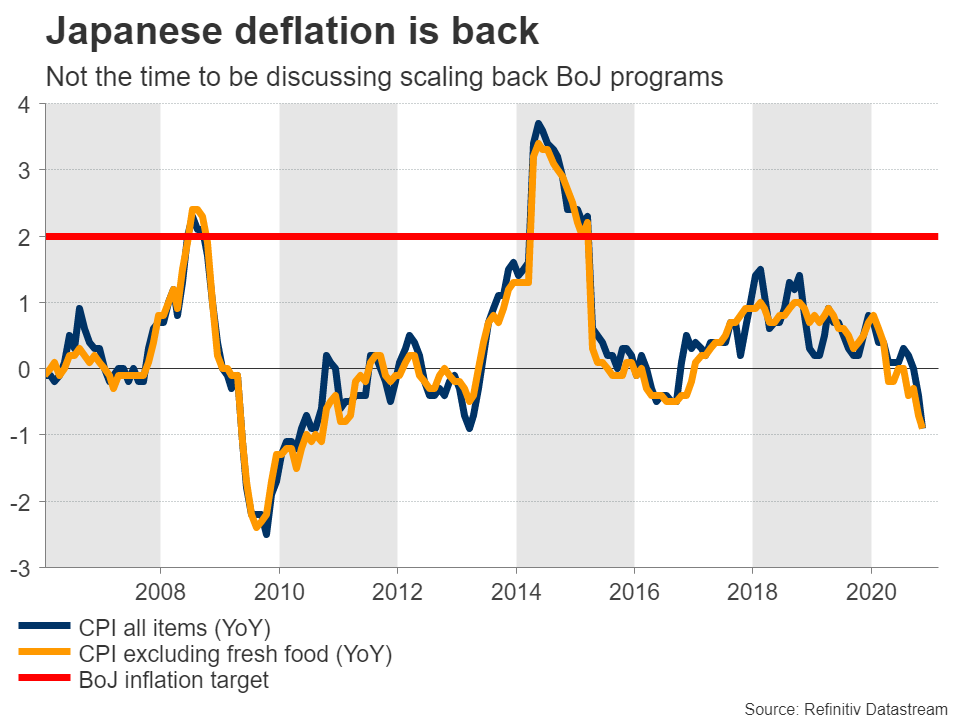 Hence, even though the measures are not draconian, consumption is still expected to take another major hit. The economy has already sunk deep into deflation, and judging by the near-term prospects for consumption, things could deteriorate even further.

Is the BoJ seriously thinking about withdrawing support?

Normally in a situation like this, the BoJ would be thinking how to increase its stimulus dose. Deflation is what a central bank is there to prevent after all. Yet, some recent media reports suggest the Bank is considering the opposite – scaling back some support.

Let’s explain. The BoJ has been the most aggressive major central bank for decades now. Interest rates are already negative, yields on 10-year Japanese bonds are not allowed to rise above 0.2%, and the Bank buys a truckload of stock market ETFs each month to support big companies directly. Its interventions have been so heavy that the BoJ is now the biggest shareholder of many businesses.

But with the stock market booming, policymakers seem inclined to make their purchases more ‘flexible’, which means taking their foot off the accelerator a little. They are considering raising the ceiling on 10-year bond yields and buying fewer stock ETFs to limit distortions in the market and support pension funds, which suffer amid ultra-low rates. 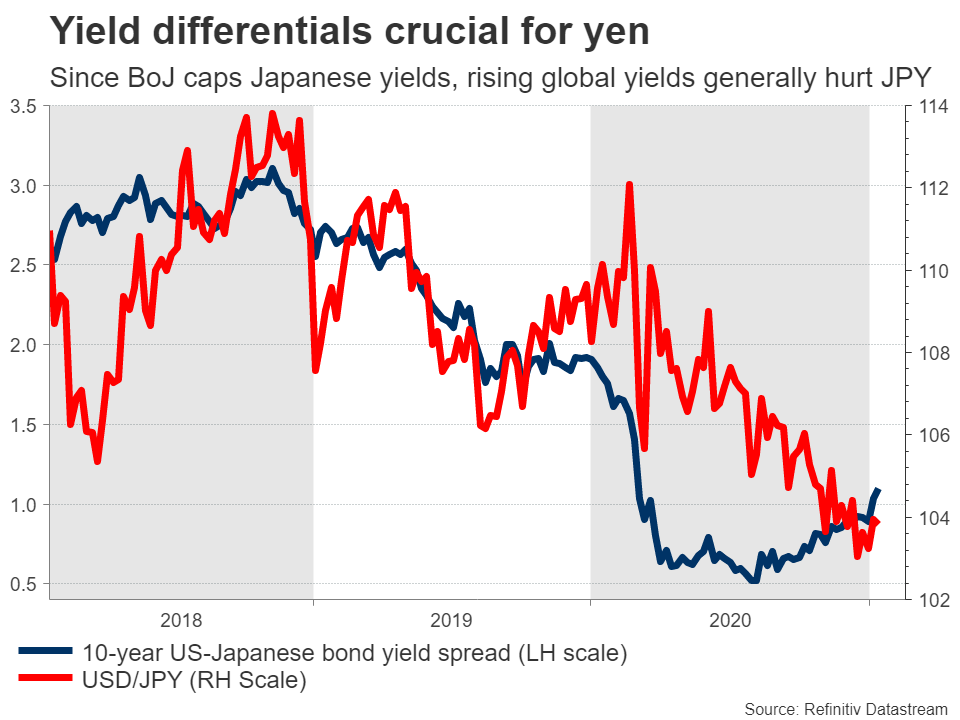 As such, markets will be watching for any hints that such measures could be announced in March, when the BoJ concludes its strategy review. If there is any suggestion from Governor Kuroda about this, the yen is likely to gain and Japanese stocks could fall. Having said that, it is highly unlikely the BoJ will offer such hints. With deflationary forces growing stronger, now is simply not the time to be discussing an exit from stimulative policies.

For the yen, it’s all about global developments

With the BoJ unlikely to disturb the waters for now, the yen’s fate hangs mainly on global factors. Specifically, it is all about bond yields. Since the BoJ has a yield curve control strategy in place that places a ceiling on Japanese yields, when global bond yields rise, Japanese ones cannot really participate. This mechanically makes the yen less attractive from an interest rate perspective.

As such, the main spot to watch will be how Biden’s stimulus battle goes in Congress, as that could determine whether US yields keep rising and how global risk sentiment evolves. If a package of $1.9 trillion gets through, the global vaccine rollout goes smoothly, and the world economy starts healing, it could be a tough year for the defensive yen.

Taking a technical look at dollar/yen, initial resistance to advances may come from the 104.40 zone, which is near the next hurdle of 104.70.