September’s US retail sales will shed some light on how household spending is responding to the global inflationary situation on Friday at 12:30 GMT. Forecasts suggest a rapid slowdown from August readings, with the dollar likely giving up some ground in the aftermath if downside pressures prove more severe, signalling a fading economic recovery. Eyes on consumption as inflation soars

As disrupted supply chains raise the odds for persistent inflation worldwide, it would be interesting to see how household spending is reacting after two years of massive fiscal and monetary support. Consumption accounts for around two-thirds of US GDP and any signs of fatigue in the biggest economy in the world can easily dampen investors’ sentiment, consequently sending some negative shockwaves to the dollar.

Undoubtedly, households have changed their spending habits to avoid infection from the dangerous delta strain, cancelling travel plans and limiting visits to bars and restaurants. However, with schools and universities reopening, purchases in groceries and merchandise stores accelerated in August, pushing retail sales back to the expansion area and defying expectations of another moderate contraction.

Retail sales could falter in September

On Friday investors will check whether the pickup in August readings was a temporary relief or a broader sign that US consumers are resilient to pandemic jitters. But considering soaring energy costs, the coming releases could bring some caution back into play, especially if the winter months prove chillier than normal and companies pass on rising input costs to consumers.

Indeed, retail sales for September are expected to decline by 0.2% m/m after a 0.7% boost in the previous month, while the exclusion of autos, which face limited production, and hence reduced sales due to the shortage of semiconductors, could elevate the measure to 0.5% m/m, but still leave it well below the August mark of 1.8%. 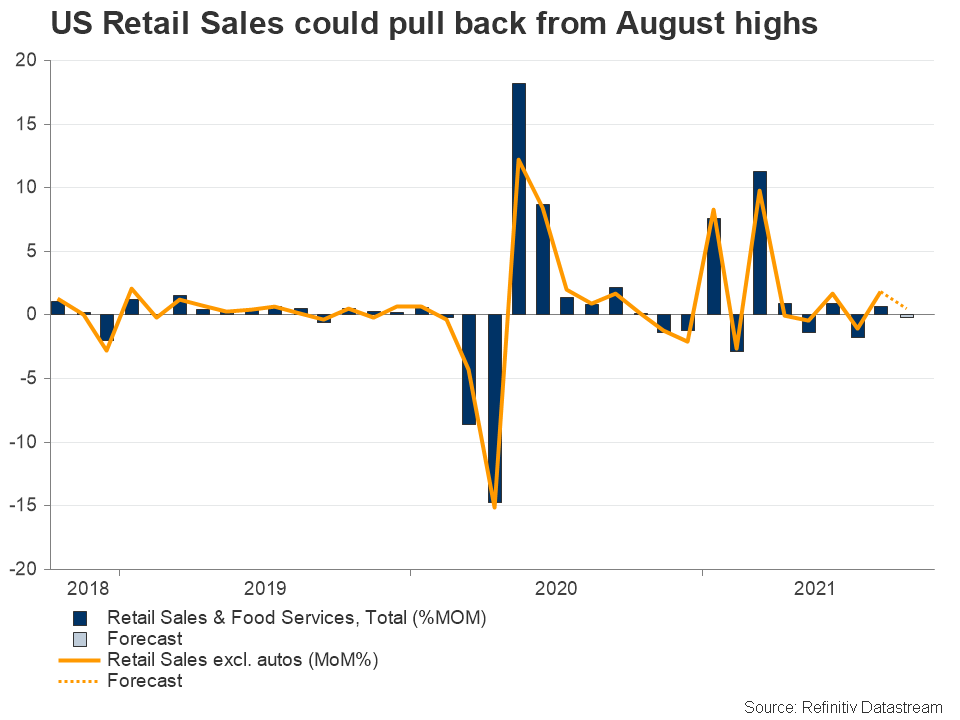 Bond tapering on the way

Following disappointing growth in nonfarm payrolls in the same month and discoursing PMI business stats, a steeper-than-expected pullback in retail sales could amplify concerns of a slowing economic recovery in the US, likely putting Fed policymakers back in a dilemma about whether it is the right time to start cutting stimulus.

On the one hand, CPI inflation continues to call for a tighter monetary policy. The headline gauge ticked back up to a decade high of 5.4% y/y in September from 5.3% previously, and the core measure, which excludes energy and food items, remained elevated at 4.0%.

Actually, the FOMC meeting minutes flagged on Wednesday that a cut in bond purchases is a done deal, with policymakers recommending a $15bln reduction per month starting in mid-November or mid-December. Therefore, the Fed may not go back on its words even if retail sales drop faster-than-expected this week.

Still, any sign that consumers' confidence is faltering could see policymakers having second thoughts about rate hikes, unless wage growth starts to catch up with inflation and the unemployment rate signals full employment conditions as the Fed desires.

Nevertheless, worse-than-expected retail sales may not bode well for the US dollar but could help the euro crawl above the 20-day simple moving average (SMA) and towards the 1.1663 barrier.

Otherwise, an upside surprise in the data would brighten the prospects for the US economy, and add some support under the greenback, pressing euro/dollar closer to its recent low of 1.1522.