Retail sales will be in focus in the United States this week as the data out on Tuesday (12:30 GMT) is expected to show that American consumers have yet to be deterred by rising prices. Amid all the talk that the Federal Reserve’s aggressive tightening of monetary policy might tip the US economy into recession, a solid set of numbers could allay those fears, boosting the US dollar, which appears to be consolidating from last week’s 20-year high.Fed’s rate hike path gets blurrier after the summer

Expectations about how many times the Fed will raise rates this year have taken a bit of a pause over the past 10 days or so, having surged at the start of the month. The Fed has signalled that it won’t go faster than 50 basis points – at least not in the June and July meetings. September is a different story, but if the early signs that inflation may have started to peak take further shape until then, rate hikes could slow to 25 bps increments in the autumn.

However, even in that ‘optimistic’ scenario, the tightening in financial conditions since the beginning of the year when the Fed was still buying bonds would be very sharp by historical standards. It shouldn’t be surprising therefore that even if Fed rate hike expectations are levelling off, the risk of a substantial slowdown in economic growth remains elevated.

US consumers are still spending

The US economy unexpectedly contracted in the first quarter, and although this was mainly down to technical factors such as declining inventories, a hit to consumption by the jump in the cost of living could drag on Q2 GDP. Two successive quarters of negative growth are technically defined as a recession – something that the Fed wants to avoid. However, persistently high inflation is even less desirable, not just by policymakers, but by the public as well.

For now, the world’s largest economy remains in relatively good shape, showing very few strains from the spike in energy prices and the broader turmoil caused by the war in Ukraine. In particular, the main driver of the American economy – the consumer – has kept spending throughout these latest economic and geopolitical storms. 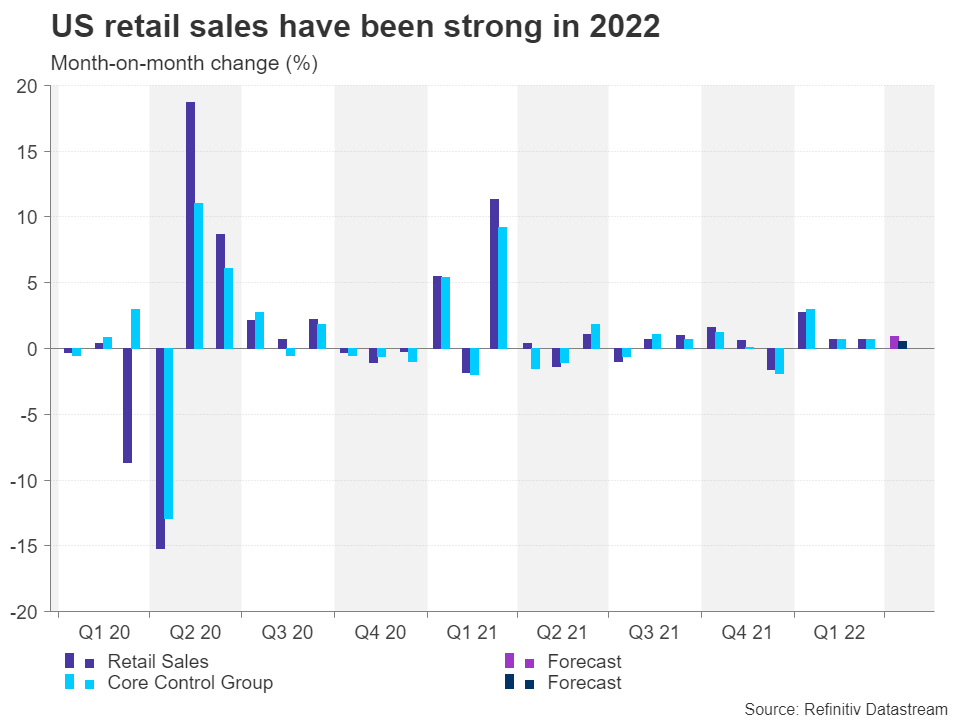 Retail sales rose by 0.7% m/m in March and they are projected to have climbed even more strongly in April, by 0.9% m/m. One of the core measures, the control group of retail sales that’s used in GDP calculations is forecast to have risen by a healthy 0.5% m/m pace following March’s upwardly revised 0.7% gain.

Dollar is off its highs

The data could give the dollar a leg up as long as they don’t disappoint, while better-than-expected figures might revive bets of further hawkish tilts to come from the Fed. The greenback is currently testing the 129 level against the yen, easing from last week’s two-decade high of 131.34. The bulls are likely to meet resistance at 130 if they attempt to re-challenge that top. If successful, the 161.8% Fibonacci extension of the May downtrend at 133.71 would become the next upside target.

However, if retail sales aren’t as strong as is being predicted, dollar/yen could slip towards key support in the 127.50 area. A negative surprise cannot be ruled out as consumer surveys have been less robust than the hard data lately. The University of Michigan’s consumer sentiment index has been trending lower since the second half of 2021 and plummeted to depths not seen since October 2011 in the preliminary reading for May.

Is the housing market a concern?Another risk for the dollar this week is the possibility of evidence that the Fed’s rate increases are starting to hurt the housing market. Building permits and housing starts for April are due on Wednesday, followed by existing home sales on Thursday. There are some signs that property demand is slowing as mortgage rates go up, so a further indication of this could see the dollar rally and rate hike speculation cooling again.