The US dollar has entered Thanksgiving week in a bullish mode and things could heat up even more before many traders head off for the long weekend as the Fed’s latest meeting minutes and the all-important PCE inflation data are both coming up on Wednesday. As speculation builds of a shorter taper timeline, the November meeting minutes due at 19:00 GMT could fuel talk of such a move. There will also be an overload of data on Wednesday, which will include durable goods orders and the second estimate of Q3 GDP (13:30 GMT). But the spotlight will fall on the PCE inflation prints (15:00 GMT), alongside the personal income and spending numbers for October.Best of the bunch

It seems that the dollar can do no wrong lately as regardless of whether Treasury yields are going up or down, the US currency is still the most appealing for traders. All of America’s main competitors (with the exception perhaps of Canada), are caught up in some kind of a storm one way or another. Hence, even the prospect of tighter monetary policy isn’t scaring investors as they see the US economy being the only one that can easily withstand higher interest rates.

Barrage of pre-Thanksgiving data on the way

Wednesday’s data deluge will likely reinforce the strong fundamentals underlining the positive outlook. Durable goods orders are expected to have edged up 0.2% m/m in October after dipping in September, while the second reading of Q3 GDP could see growth being revised up slightly from 2.0% to 2.2% on an annualized basis.

In a further encouraging sign that growth momentum got into a higher gear at the start of the final quarter, personal consumption is projected to have jumped by 1.0% m/m, accelerating from the prior 0.6% rate. Personal income likely improved too, rising by 0.2% m/m after dropping 1.0% in the previous month. 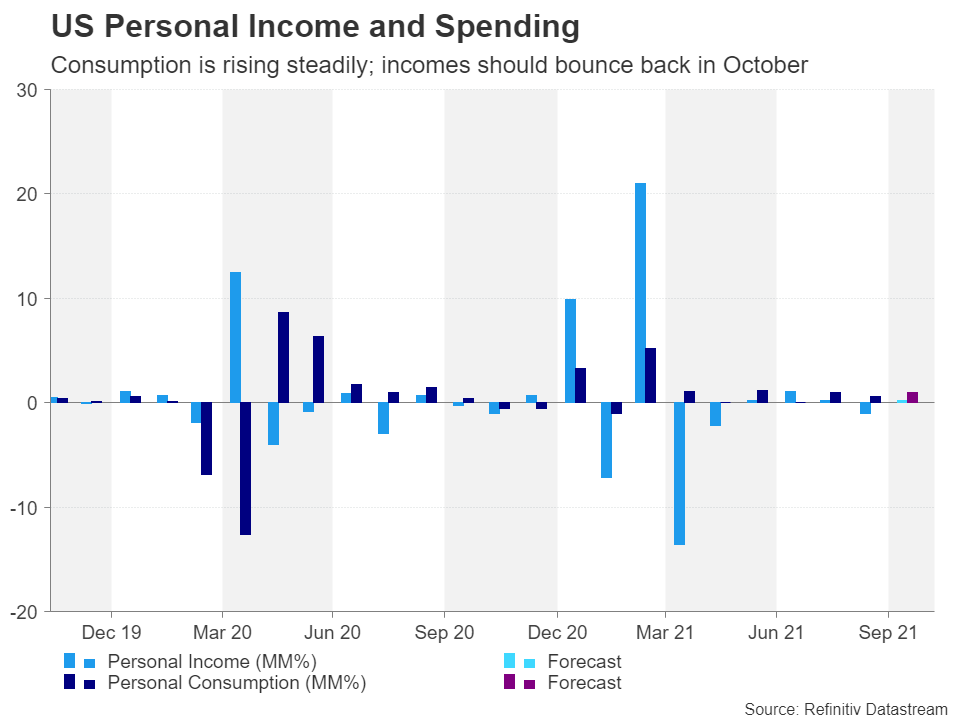 Most important of all, the core PCE price index – the Fed’s preferred inflation gauge – is expected to have increased to 4.1% y/y in October from 3.6% before. While not quite as hot as the broader consumer price index, core PCE is at its highest in 30 years. So a bigger-than-expected rise could add to bets that the Fed will end its asset purchases much sooner than planned, which would pave the way for an earlier rate hike. 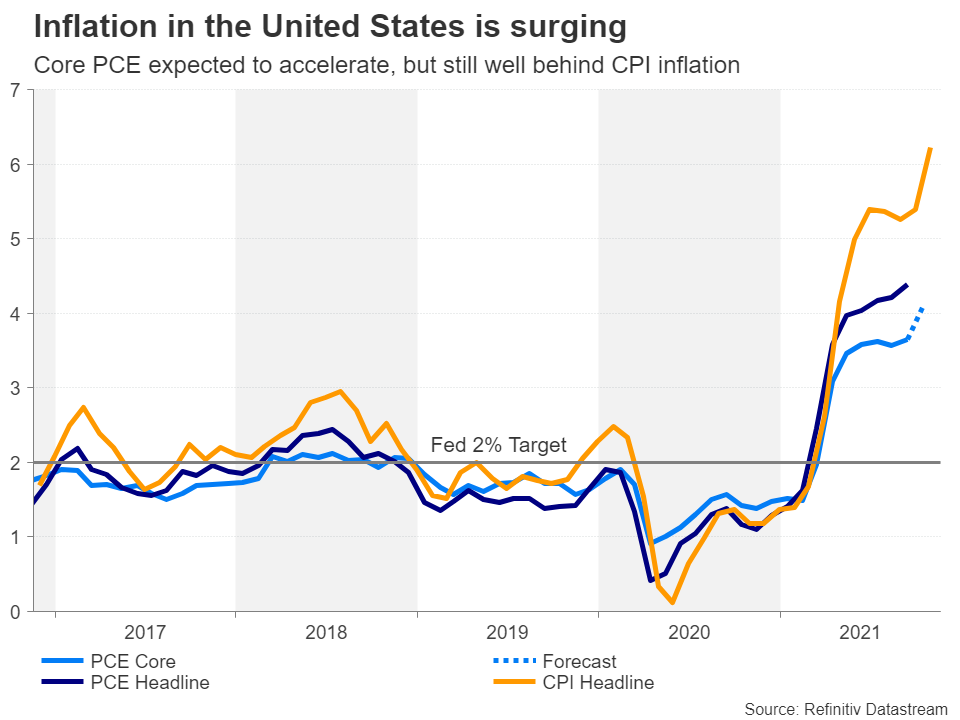 Will Fed minutes reveal anything new?

However, investors will also be dissecting the minutes of the November FOMC meeting for clues as to how many policymakers were calling for a more aggressive tapering and just how concerned committee members were about the strength and persistence of the inflationary forces sweeping the economy. With Fed Chair Powell lately being somewhat dubious about whether this episode of high inflation is transitory or not and other officials signalling the need to possibly speed up the tapering process, hawkish minutes could keep the dollar rally going for quite a while longer.

Dollar is on a winning streak

The dollar index is currently heading towards the 261.8% Fibonacci extension of the October downleg that’s located at 96.64. If this resistance is broken, the next target for the bulls will be the 97.0 handle, which was last visited in July 2020.

However, if sellers were to gain the upper hand, not so much because the data disappoints or the minutes are surprisingly dovish, but rather because sentiment towards other currencies improves and profit takers jump in, the 96.0 level would be at risk. The nearest key support to the downside would probably be found at the 200% Fibonacci extension of 95.84 followed by the 161.8% Fibo of 95.35.

That’s not to say that neither the economic pointers nor the minutes don’t pose a downside risk for the dollar, but given the recent evidence, any disappointment from the data or the tone of the Fed’s discussion on tapering are likely to be minor. Furthermore, now that the question mark about Powell serving a second term as Fed Chair has been resolved and Lael Brainard is out of the frame, the odds of dovish surprises from the Fed have been reduced somewhat.