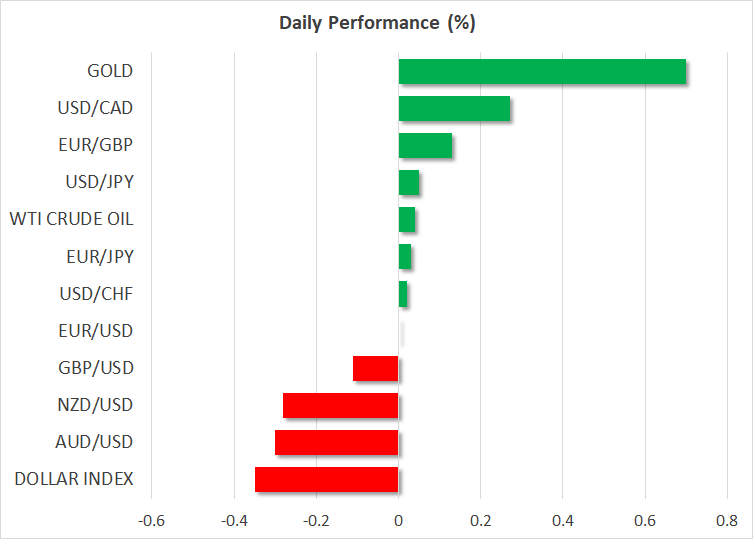 Bond markets finally wake up to the sound of central banks

US Treasury yields led the surge in global government bond yields amid a delayed response to the flagging of an imminent taper announcement by the Federal Reserve on Wednesday. Bond traders finally took notice of the global shift in monetary policy after both the Bank of England and Norges Bank followed up the hawkish soundbites at their respective meetings on Thursday.

The Norges Bank hiked its policy rate by 25 basis points, becoming the first major Western central bank to do so during the pandemic, while the Bank of England signalled the possibility of a rate increase in Q1 2022.

The yield on 10-year UK gilts shot up after the BoE meeting, hitting the highest since March 2020 today. However, with the Fed likely to keep buying bonds until the middle of next year, 10-year Treasury yields could only manage a 2½-month high of 1.4520%.

Wall Street seemed unfazed by the initial spike in yields and the major US indices rallied for a second straight day on Thursday. Fed Chair Powell’s bullish take on the US economy, combined with the repeated message by world central banks that the supply constraints and consequent surge in inflation will be temporary, helped to revive optimism about the global growth outlook. Investors will be able to hear more from Powell later today when he speaks at 14:00 GMT.

The Dow Jones gained the most, closing up 1.5%, while the S&P 500 and Nasdaq Composite ended the day with gains of 1.2% and 1.0%, respectively. However, e-mini futures were in the red on Friday, with Nasdaq futures slipping the most. The jump in long-term borrowing costs is likely weighing on tech stocks with bloated valuations as yields extended their gains today.

However, ongoing uncertainty surrounding Evergrande’s liquidity problems is casting a shadow over the broader markets amid fears of a possible global contagion from the crisis. Most Asian stock markets closed lower today and European shares fell back as well at the open.

Evergrande missed an interest payment on its dollar bonds on Thursday, despite coming up with funds to settle a local bond payment. The company has 30 days to make the payment before defaulting but the lack of transparency around its financial health as well as about any potential state bail out by Chinese authorities is making investors nervous.

The mood in currency markets was also somewhat dampened on Friday from the slight risk-off in equity markets, though the safe haven currencies were struggling to gain significant traction.

The US dollar edged up slightly from yesterday’s lows against a basket of currencies and the yen and franc were mixed. The greenback’s downside reversal from the immediate post-Fed boost hasn’t translated into much of a rebound for the risky commodity-linked dollars. The aussie, kiwi and loonie are not showing a clear direction in the aftermath of the FOMC meeting and all three were paring the previous session’s gains today.

The euro hovered near its highs, however, around $.1735, while sterling was seeking support from the $1.37 level. The pound got a strong lift from the Bank of England on Thursday as investors brought forward their expected timing of a rate hike, with interest rate futures indicating odds of more than 50% for a move in February 2022. But the downside risks for the British economy have been growing lately and traders don’t seem to share the same optimism as BoE policymakers. Hence, the boost to the pound would have been much more spectacular otherwise.