As central banks push back on rate hike bets, can they be trusted?

The world’s biggest central banks have been on the offensive lately, arguing that markets have become overly aggressive with their pricing of rate hikes. Policymakers have been taken aback not only by the scale of the price shocks induced by the global shutdowns but also by how widespread and persistent the supply constraints have become. Subsequently, inflation expectations have risen to multi-year highs, with bond markets being the first to respond to the changing inflation landscape. But who is right? Are investors overreacting to the inflation threat, or are policymakers putting off the tough decisions for later? And why the US dollar could come out on top in the normalization race even if the Fed doesn’t.Flattening yield curves – sign of stagflation?

Market-based inflation expectations have been steadily creeping higher all year, with the upward drive gaining additional impetus over the past month. The growing realization that supply-chain bottlenecks and broad-based shortages that are affecting everything from retail to manufacturing to the energy sector won’t be resolved very quickly have sparked talk of stagflation. 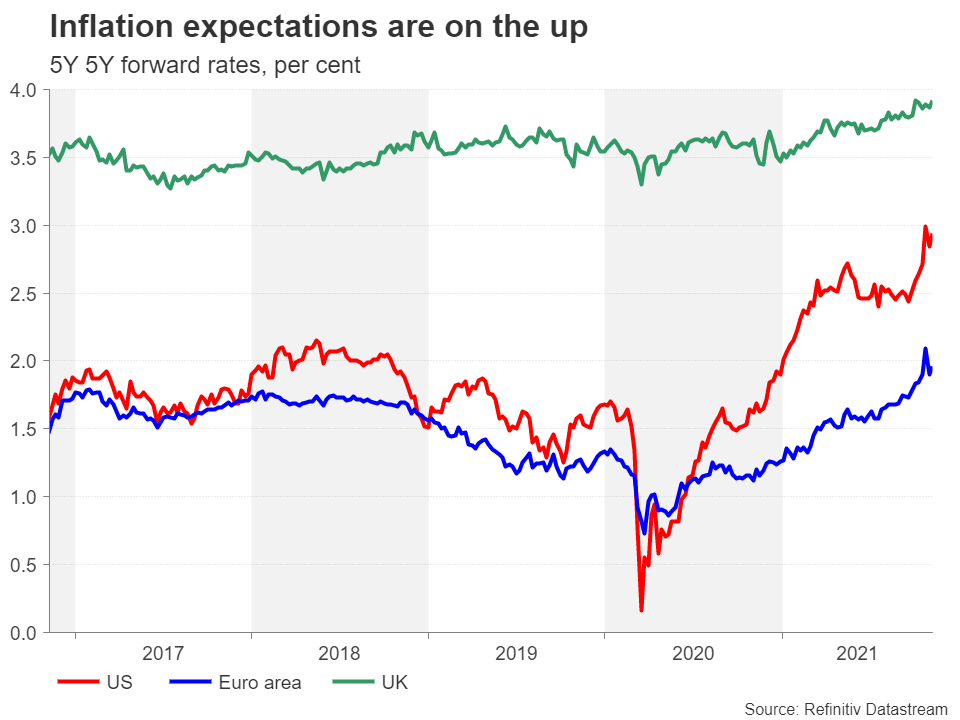 The last time the world faced a prolonged period of sluggish growth and astronomical inflation was in the 1970s. It is debatable whether stagflation correctly describes the current crisis but flattening yield curves certainly give credence to this view. The surge in inflation expectations is pushing up short-dated government bond yields, but long-term bond yields have either not been able to keep apace or are pulling back.

The US yield curve, for example, steepened sharply at the start of the year, but has since flattened as investors have become less optimistic about the longer-term growth outlook. Whilst it’s true that the anticipation of earlier action by the Fed to combat burgeoning inflation has dampened expectations about the need for bigger rate hikes further out in the future and the yield curve is some way off from inverting, the flattening trend nevertheless adds to investors’ jitters. And for some economies like the UK, there are much deeper concerns about whether they would be able to withstand aggressive rate increases. 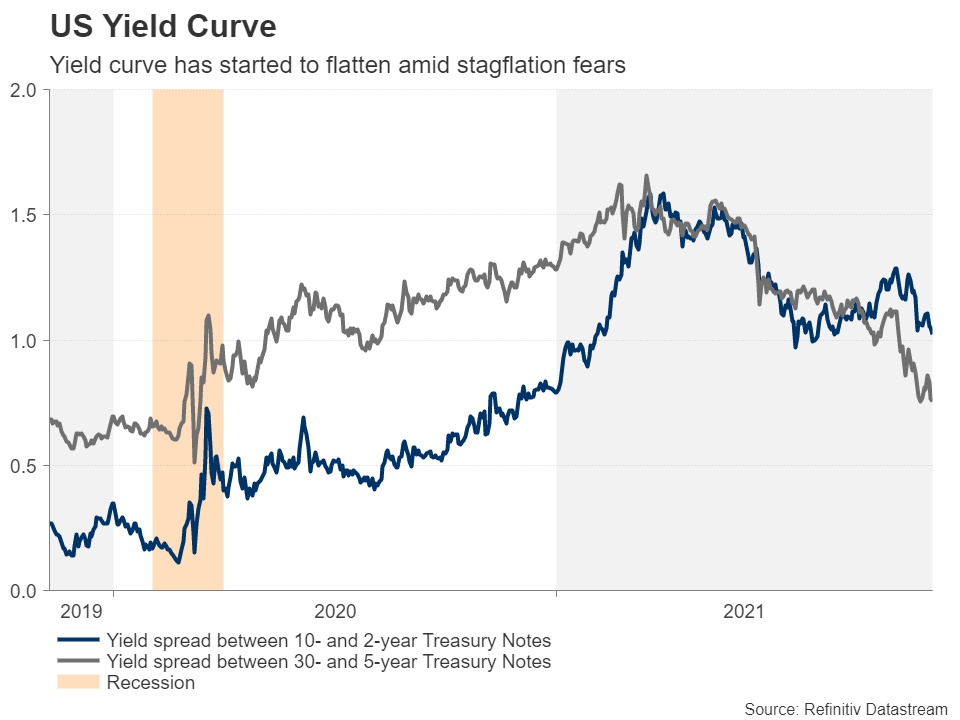 The art of prediction

For currency markets, however, the focus right now is very much on what is happening to the short end of the curve. Specifically, the timing of liftoff for each central bank is everything. Up until a few days ago, the Bank of England was primed to become the first big central bank to raise its policy rate for the first time during the pandemic. However, investors were wrong-footed by a series of clumsy communication by BoE officials. Although the Bank is still expected to tighten policy in the coming months, Governor Andrew Bailey was clear in signalling that markets have priced in too many rate increases over the next year.

The sharp repricing in money markets in the aftermath of the BoE meeting last Thursday was mirrored by the price action in cable. The pound tumbled towards $1.34 at one point but the fact that it had failed to make a higher high even when speculation of an imminent rate hike was rampant is indicative of wider investor concerns about the UK’s economic prospects. 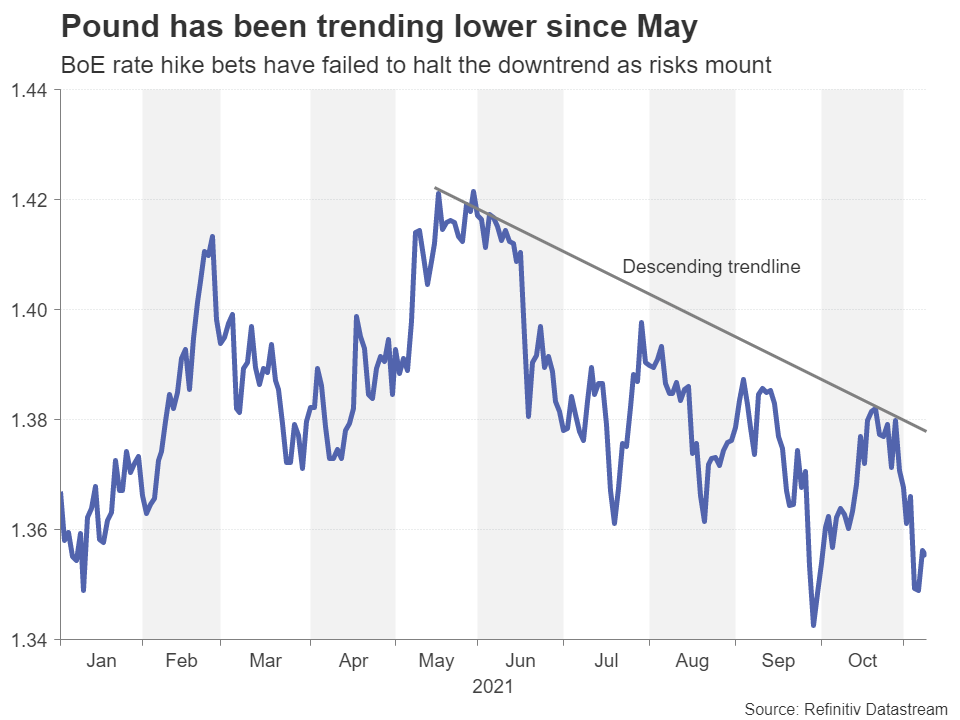 Britain’s supply issues and worker shortages, as well as the energy crunch, have been exacerbated by Brexit and now there is also a danger of a fresh standoff between London and Brussels over Northern Ireland. The UK is threatening to suspend parts of the Northern Ireland protocol agreed in the divorce arrangement, which could in turn prompt the EU to cancel the post-Brexit trade deal altogether.

Are markets wrong about the BoE, RBA and ECB?

Dark clouds are also forming over Australia’s economy amid plunging iron ore prices and a slowdown in China. Although in the near term, growth is expected to bounce back as the country emerges from months of lockdown, investors may be discounting the potential headwinds that could hinder the recovery in the medium term.

The Reserve Bank of Australia has struck somewhat of a middle ground, ditching its previous guidance of no rate hikes before 2024 but dismissing the idea of a liftoff before 2023. With traders nonetheless pricing in about three rate rises in 2022, the stakes are high for the Australian dollar - higher than even for sterling - if the markets are proven wrong. The odds for BoE rates in comparison are for four increases. But with a good chance of at least a 50 bps move next year, the downsides risks are much less for sterling.

The euro area is not exempt from the intensifying market bets that central banks will be forced to bring forward rate hikes. Money markets are pricing in at least a 10-bps increase in the ECB’s deposit rate next year even though President Lagarde has signalled that this is “very unlikely”. However, with the euro already having a comparatively weaker outlook than its peers, any adjustment in rate rise expectations would be minor.

The wild card in all this could be the Federal Reserve. The last FOMC meeting earlier this month was perceived to be dovish by the markets. However, investors may have missed several clues from Chair Powell that the Fed is increasingly open to shifting from the laid-out policy path should high inflation turn out to be not so transitory even as he deflected attention away from liftoff. Fed fund futures are currently pointing to rates being lifted twice in 2022. Expectations for the first one have been pushed back from July to September following the November meeting. But if anything, Powell left the door open to both hastening the tapering timeline and raising rates by the middle of next year.

So in spite of all the headlines of the Fed being “patient”, the US dollar is probably more prone to hawkish surprises than dovish ones. The only other major currencies that fall into this category are the Canadian and New Zealand dollars. Canada’s economy is not only recovering very strongly but it’s also less immune to global risks such as the energy crisis and supply constraints. In addition, the price of Canada’s main export – oil – has soared this year and the rally may not be done yet. Hence, the Bank of Canada might end up having the steepest rate hike path. 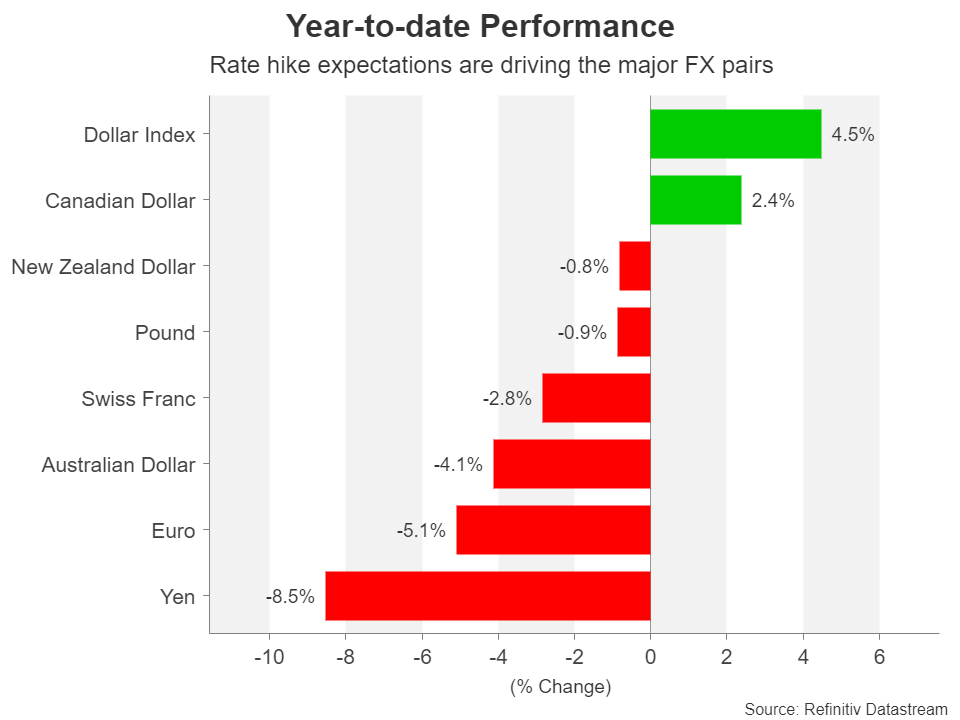 In New Zealand, meanwhile, the latest lockdowns appeared to have made only a minor dent on economic output, putting the RBNZ on course to raise rates again later this month, possibly by as much as 50 bps. However, the Canadian dollar is in a better position to capitalize from tighter policy than the New Zealand dollar as the kiwi tends to not diverge too greatly from its aussie counterpart.

The big question now for the markets is how long is transitory? Policymakers have been dubious about their definitions of temporary but there is a growing consensus that if inflation doesn’t begin to come down by the middle of 2022, then there are forces other than the pandemic-related supply disruptions at play. Central banks are unlikely to continue favouring economic growth over low inflation in this tradeoff when setting policy if the transitory argument is lost. 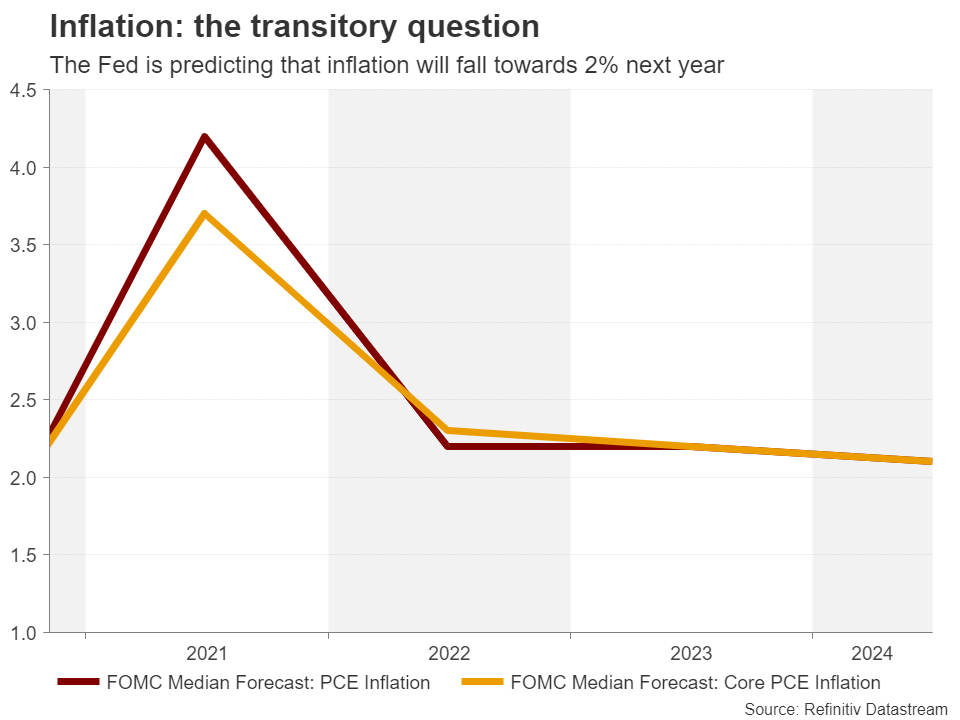 In this worst-case scenario, dollar strength could prevail as the US economy would probably cope better with higher rates than most other advanced economies as it would be aided by plentiful fiscal stimulus and self-sufficiency on energy. Moreover, if rates are rising globally in a stagflationary environment, the greenback would additionally draw some safe-haven flows.

Alternatively, if inflation were to begin to subside at some point in 2022, the outlook for the greenback is again relatively brighter as the Fed would be more likely to press on with rate increases to prevent the economy from overheating, while the currencies with the most aggressively priced rate hike cycles would suffer the most.

Stocks 2022 outlook: will the bulls dominate or are bumpier times ahead?

FX year ahead 2022: Brace for volatility

Commodities outlook: what does 2022 hold for gold and oil as virus still lingers?