Bitcoin and most altcoins have struggled during the first months of 2022 as central banks’ monetary tightening has been squeezing most assets across the board. After a vast sell-off in April, major cryptocurrencies have adopted a rangebound pattern as investors eagerly await the Fed’s decision on benchmark interest rates on Wednesday, as well as its forward guidance regarding its balance sheet reduction. Therefore, in a period when Bitcoin’s correlation with the US stock indices remains near its all-time-high levels, will the mounting macro headwinds drive crypto markets lower?

FOMC decision in the spotlight

Later today, investors will be keeping a close eye on the Fed’s interest rate decision as it could prove catalytic for most asset classes. Specifically, the Fed is expected to hike rates by 50 basis points, which would be the first-half point rise in 22 years in its effort to cool down the persistently high inflation. However, this is already baked in by the markets and attention will probably lie on Jerome Powell’s press conference.

If the Fed Chair appears to be more hawkish than expected, signaling that the Bank will proceed with an aggressive rate hike timeline and a prompt balance sheet reduction, despite the increasing fears of a slowdown in economic growth and a potential recession, this could cause a severe capitulation in risky assets. Consequently, this turbulence would spill over to the crypto markets as investors would steer away from volatile assets. 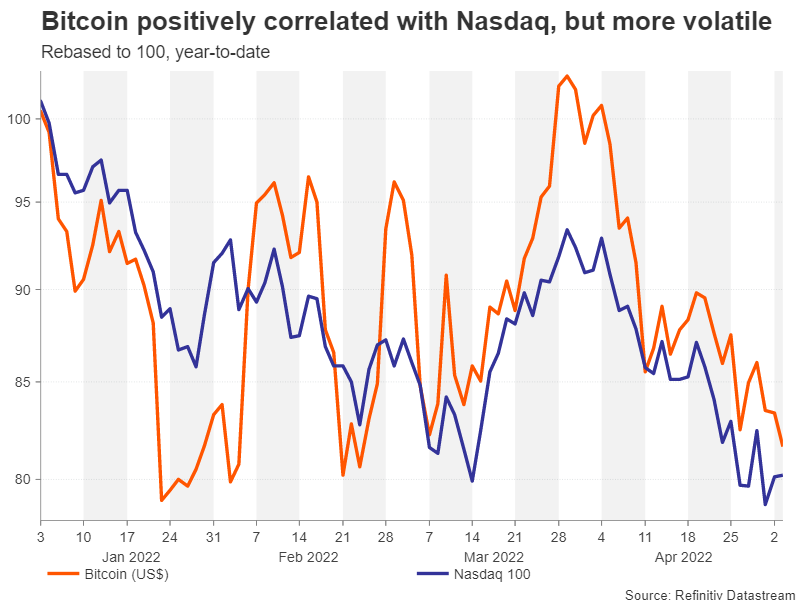 But more than that, the anticipation of higher interest rates has applied upward pressures on bond yields, turning the 10-year US real yield positive for the first time since March 2020. This development combined with the increasing macro risks might fuel up demand for bonds, which are finally acting as an attractive alternative to risky assets.

Monetary tightening is not the only risk for speculative assets as we head deeper into 2022. On Wednesday, the European Union proposed to ban Russian crude oil over the next six months and refined fuels by the end of the year, increasing the probability of a recession in Europe. Moreover, the lockdowns in China seem to be further deteriorating supply disruptions, keeping inflationary pressures high.

In recent months, the average person has seen his energy bills going through the roof, alongside food prices and rents. Therefore, considering the continuously increasing cost of living and the broader economic uncertainty as well as the withdrawal of excess liquidity, investors might prefer to play defence, curtailing their exposure.

On the bright side, there are some signs of growing cryptocurrency adoption by big players in the financial industry. For instance, Coinbase acquired the first loan ever, which entails Bitcoin as collateral, from Goldman Sachs. It is obvious that Coinbase’s agreement with Goldman is the first step towards the recognition of crypto as a real asset, narrowing the gap between the fiat and crypto economies.

In other news, the Central African Republic has adopted Bitcoin as an official currency, making it the first country in Africa and the second in the world after El Salvador to do so. The government supports that this action will improve the conditions of Central African citizens as it could create intergenerational wealth for people that never really had access to financial instruments.

This development could open the door for many emerging countries to start adopting Bitcoin as a tender currency, which might eventually put pressure on policymakers to create a universally accepted regulatory framework.

Will Bitcoin’s price make it or break it?

Taking a technical look at Bitcoin’s price, the largest cryptocurrency by market capitalization is experiencing a consolidation phase after its short-term decline failed to push below the $37,500 mark. Nevertheless, we can observe that a descending triangle pattern has formed and the outcome of today’s FOMC meeting could declare the direction of the next price break.

Should the Fed tone down its hawkish rhetoric, the price could post an upside breakout, slicing through the $40,000 barrier and targeting the 50-day simple moving average, currently at $42,000.

On the flipside, signals of a faster tightening cycle may send the price to test the recent low of 37,500 before the spotlight turns to the 2022 low of $32,950.