BoC meeting: With a little anxiety from the US – Forex News Preview

The Bank of Canada (BoC) will wrap up its policy meeting at 14:00 GMT Wednesday, and while no action is expected, the accompanying statement could still be crucial. Even though the Canadian economy is healing, the resurgence of infections in the US is scary given Canada’s exposure to America, and might lead policymakers to strengthen their easing bias. If so, that would argue for a negative reaction in the loonie. Longer term though, the stage seems set for a powerful rally.

The Canadian economy has continued to recover since the BoC’s latest meeting in June. Incoming data confirm that both the jobs market and the broader economy are slowly healing their wounds, helped by the gargantuan stimulus measures from both the government and central bank.

This is precisely what the BoC envisioned at its June meeting. Back then, policymakers noted that the worst point of the crisis was likely behind Canada, but they also warned of ‘high uncertainty’ about how the recovery would play out. These encouraging signs suggest the Bank will probably stay on the sidelines at this meeting. But this is not the time to sound optimistic either. 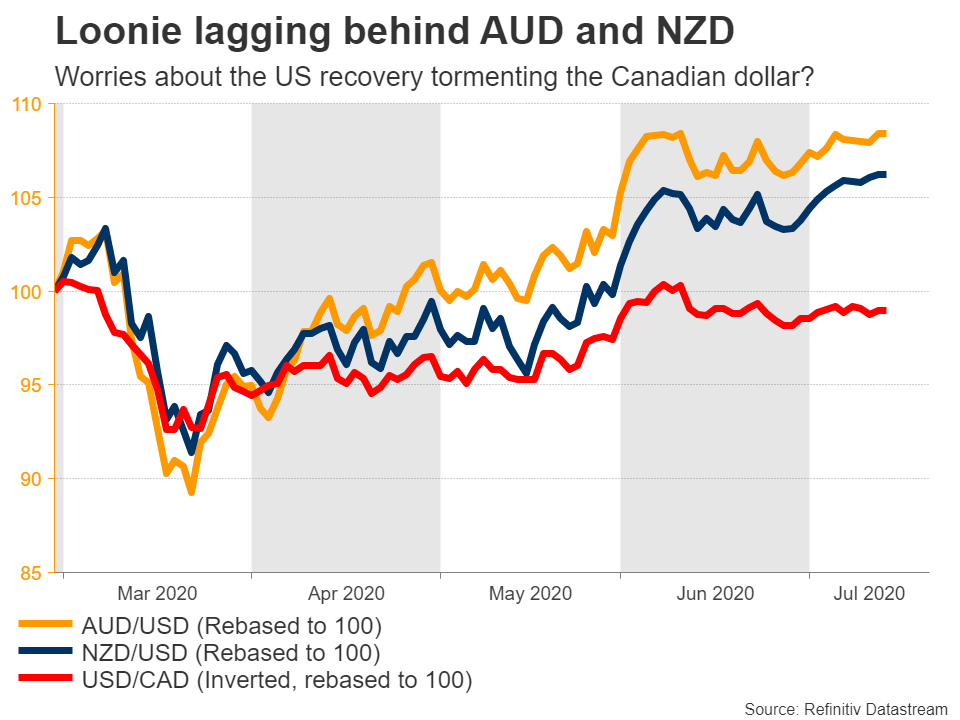 Things might be going according to plan in Canada, but that’s not the case across the border, in the US. Infections are soaring in America, threatening to disrupt the economic recovery as health concerns might keep consumption down, or worse yet, force some states back into lockdowns.

Around three-quarters of all Canadian exports are destined for the US market, so the fortunes of the Canadian economy are tied together with those of the American one.

Indeed, concerns about America likely explain much of the loonie’s weak performance throughout this recovery. The Canadian currency has strengthened since the March meltdown to be sure, but it has gained much less than the Australian or New Zealand dollars, despite the powerful rebound in oil prices. The White House threatening new tariffs on Canadian aluminum exports lately didn’t help either.

What does all this imply for the BoC? In a nutshell, the central bank will probably acknowledge the encouraging signs in Canada, but keep a cautious tone overall, as the worsening US outlook threatens to spill over and put the brakes on the Canadian recovery too. As such, from a risk-management perspective it makes more sense for the BoC to strengthen its commitment to supporting the recovery, for example by stressing that it stands ready to act again if needed.

If so, that would argue for a negative reaction in the loonie. Taking a technical look at dollar/loonie, the pair could spike higher and head for a test of the 1.3715 zone initially.

Beyond the BoC meeting, much of the loonie’s near-term direction will depend on global risk sentiment and how quickly US infections rise. Admittedly though, the next few weeks look difficult, as incoming US data for July that will capture the effects of business re-closures in several states could dampen risk sentiment, alongside a potentially disastrous earnings season.

Longer term though, once the US outbreak is brought under control, the stage seems set for a powerful rally in the loonie. The currency’s underperformance so far implies that it has greater scope to strengthen going forward, something also supported by CFTC positioning data, which show that large speculators remain net short.

Therefore, if sentiment improves, there’s potential for a ‘short squeeze’ that catapults the loonie much higher as several short bets are closed or covered.

In this scenario, dollar/loonie could break below the intersection of the 1.3490 level and the 200-day simple moving average (SMA), to challenge the June low of 1.3310 initially.