The Bank of Japan will publish the Summary of Opinions of its September policy meeting on Monday (Sunday, 23:50 GMT), while a raft of data will also be watched amid growing speculation the Bank is preparing to announce further easing in monetary policy. The most important release will be the BoJ’s Tankan survey for the third quarter on Tuesday (Monday 23:50 GMT) as a sharp deterioration in business sentiment could spur policymakers into action at the October 30-31 meeting. The yen could come under pressure should the data and the meeting summary point to fresh stimulus measures.

Will the BoJ hint at additional stimulus?

At the last meeting on September 18-19, the BoJ gave its strongest indication yet that it could ease policy as early as the next meeting, saying it will “reexamine economic and price developments at the next MPM”. Follow-up comments from Governor Haruhiko Kuroda have reiterated this message and hinted at a cut in short- and medium-term rates to steepen the yield curve.

However, like their peers at the European Central Bank, the BoJ’s board members are split about the need for further stimulus, citing dangerous side effects to the financial system from a prolonged period of ultra-loose monetary policy. This means the BoJ may disappoint and make only minor tweaks to its stimulus programme if policymakers are unable to find ways of mitigating the cost of deeper negative interest rates on financial institutions.

If the Summary of Opinions signals the majority of board members are not leaning towards drastic changes to existing policy, dollar/yen could be bumped down by yen bulls, with the 50-day moving average near the 107 level, likely to be their first target. However, should the Summary provide even more explicit signals of policy easing in October than the meeting statement did, dollar/yen is likely to get a bit of a boost, potentially getting a lift towards the 109 handle, which was a strong resistance area back in July.

Another focal point for yen traders will be the BoJ’s Tankan business survey. The quarterly report is not anticipated to bring much cheer as the protracted trade war is expected to weigh on businesses’ confidence and outlook. All the key Tankan indices are forecast to show a decline for the third quarter and the quarter ahead, highlighting the broadening effect of the prolonged period of trade uncertainty on the economy.

The non-manufacturing sector is expected to perform notably better than the manufacturing sector as resilient domestic demand has helped support the economy while a slowing global economy has dented demand for Japanese exports. However, large manufacturers are expected to maintain positive projections of capital expenditure plans for the current fiscal year, which would suggest some strength in the sector. 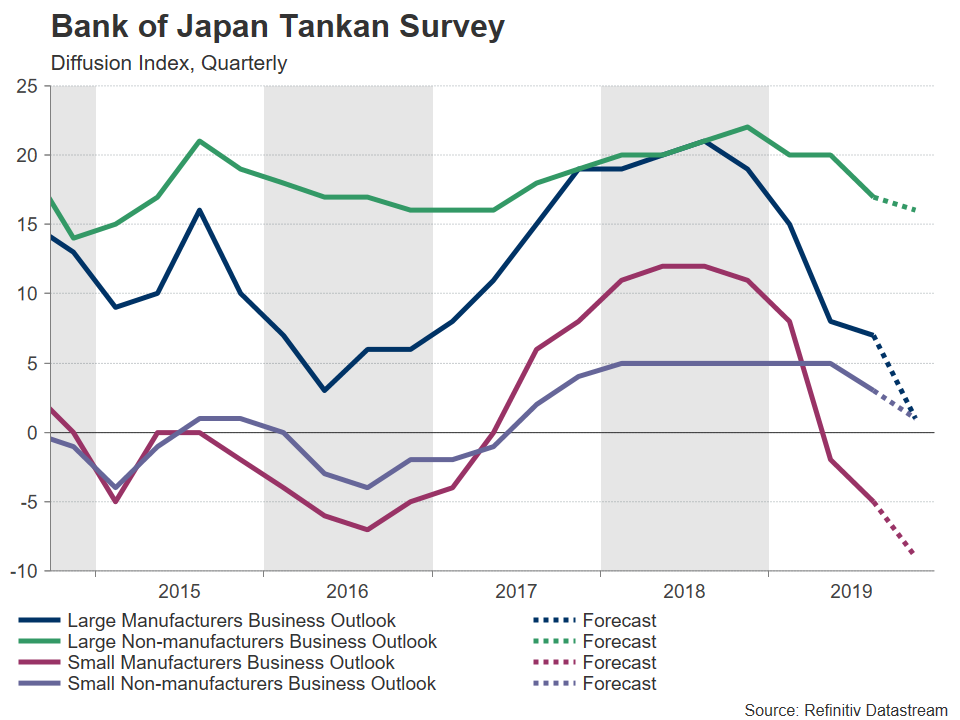 Inflation data released early on Friday piled further pressure on the BoJ to act soon after the Tokyo consumer price index, excluding fresh foods, fell to 0.5% year-on-year in September – the lowest in 16 months. The disappointing reading makes it less likely the BoJ will be able to achieve its 2% price goal anytime soon.

Other Japanese data to keep an eye out for next week are retail sales and preliminary industrial output numbers on Monday as well as jobs figures and the final manufacturing PMI on Tuesday.