The Bank of Japan (BoJ) will conclude its latest policy meeting during the Asian session on Thursday. No change in its massive stimulus program is expected, and considering that inflation remains subdued, any hints of future normalization are unlikely too. Hence, the yen probably won’t respond much, and may instead continue to be driven mainly by shifts in global risk appetite.

Under its current framework of “QQE with yield-curve control”, the BoJ has pledged to keep the yields on longer-dated Japanese government bonds fixed around 0% in an unprecedented attempt to stimulate borrowing and investment in Japan – and through those, boost inflation. Alas, despite the Bank’s best efforts, inflation has remained stubbornly low – data due on Thursday (2330 GMT) is expected to show the core CPI was unchanged at 1.0% year-on-year in November. This suggests there is little imminent pressure on policymakers to even consider an exit from their massive stimulus program. 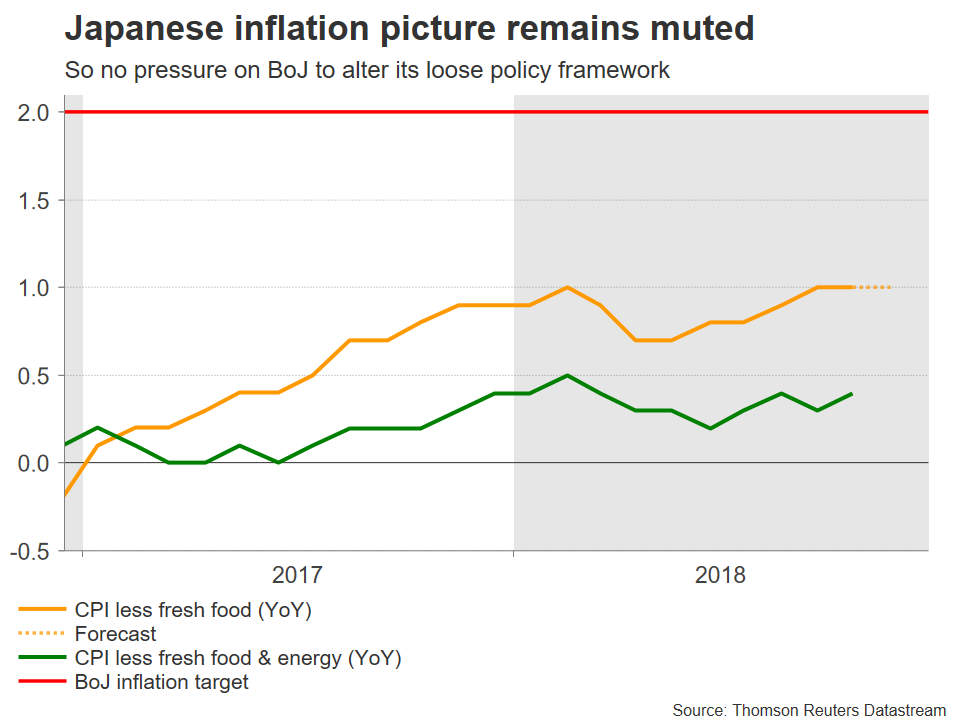 On the contrary, the BoJ seems to have every reason to maintain a dovish stance, considering the economy contracted by a sizeable 2.5% in Q3 on an annualized basis. Another similar print in Q4 would mark a technical recession for the economy, defined as two consecutive quarters of contraction, reinforcing the concept that now is probably not the best time for the BoJ to change course.

Indeed, considering also that the government plans to raise the consumption tax rate in October 2019, any policy change from the BoJ seems highly unlikely, not just at this meeting but probably for most of next year as well, absent a dramatic improvement in economic data. The last time this tax was hiked, back in 2014, a recession soon followed as consumer spending collapsed.

As for the yen, it’s unlikely to move much if the BoJ simply maintains its policy and tone unchanged. Instead, the currency may continue to be driven primarily by shifts in global risk sentiment, considering its status as a defensive asset. In recent months, the yen has attracted inflows mainly when trade tensions flared up, or when sell-offs in stock markets intensified to the point where investors sought safety. Yet, the currency has been unable to hold onto gains for long; the haven-boosts it receives tend to be short-lived and fade after a few days. For that to change, it may require an extended period of risk aversion in markets, which could materialize if the latest sell-off in stocks intensifies further, or the US-China trade talks break down.

Technically, dollar/yen could encounter an initial barrier to advances near 112.98, where the 50-day simple moving average is currently located. An upside break may open the way for 113.70, the top of December 13, with even steeper bullish extensions eyeing the 114.15 area, marked by the November peaks.

On the downside, preliminary support may be found at 112.20, the December lows. If the bears pierce below that, declines could stall near 111.35, the October trough.