Can a surge in US retail sales send the dollar and yields soaring? – Forex News Preview

After Tuesday’s big jump in US inflation, investors will be turning their sights to the March retail sales numbers due on Thursday (13:30 GMT). Retail sales slumped by 3% in February as the boost from the December stimulus payments faded and bad weather kept people at home. But as another round of stimulus payments make their way to American bank accounts and the Covid situation eases, retailers are expected to have enjoyed a bumper month in March. A solid reading is bound to lift investors’ spirits, but the risk that too strong data could send stock and bond markets into a spin and catapult the dollar higher is receding.

Inflation spikes, but no panic

Markets just got a taste of what a period of higher inflation will look like after the United States reported a jump in its consumer price index (CPI) to 2.6% year-on-year in March. That was the highest figure in two and a half years. Yet, despite all the panic in bond markets about inflation spiralling out of control, Treasury yields reversed lower after a brief spike up, pulling the dollar down as well.

Investors might have been relieved that most of the month-on-month increase in the CPI was driven by transitory factors such as higher gasoline prices and exacerbated by last year’s low base effect. With little evidence that underlying price pressures are being passed onto consumers, investors might be starting to follow the Federal Reserve in becoming more relaxed about a temporary period of stronger inflation.

There are similar parallels with the trend in consumption. Hot in the heels of the December stimulus package, Congress approved another and even bigger virus relief bill in March, signing off on $1,400 stimulus payments to be delivered to most Americans. Combined with the decline in Covid infections, easing restrictions and the rapid acceleration in vaccinations, consumers probably splashed out in March. 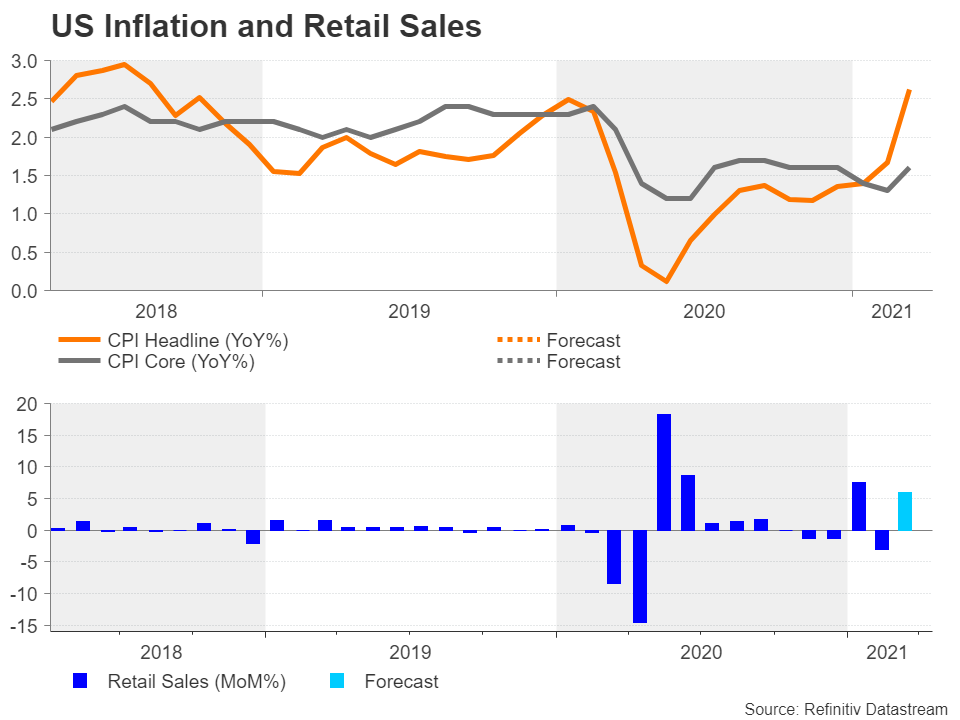 Retail sales are projected to have surged by 5.9% over the month, while the closely watched control group measure that excludes autos, gasoline and construction materials, and is used in GDP calculations, is expected to have increased by an even larger 6.3% m/m.

But although this bodes well for the US recovery, the boost is likely to dissipate after a few months. Thus, headline-grabbing numbers from the incoming data might not quite have the expected huge impact now that markets are starting to look through these transitory or one-off factors.

The US dollar is consolidating at the moment, having eased from its end-of-March peak, in line with the retreat in the 10-year Treasury yield. Against the yen, the greenback is eager to crack its immediate resistance of the 109.75 area. This is the 78.6% Fibonacci retracement of the March-November 2020 downtrend. A much better-than-expected retail sales figure, such as a double-digit beat, could be what it takes to push the pair above this level and towards the late March top of 110.96. However, for more sustained gains, the dollar needs to reclaim the 111-yen handle.

Should retail sales rise less than expected, the pair might pull back towards the 61.8% Fibonacci of 108.22. If this level is breached too, it would risk slipping below the 50-day moving average, which currently stands at 107.72.

On balance, though, the dollar is looking increasingly neutral in the short- to medium-term as investors take a wait-and-see approach to the economic and vaccine data. A clearer picture on how sticky this inflationary outburst becomes and how sustainable the predicted consumption boom will be might not be formed until after the summer, at which point, the Fed might also have a better idea about when to begin tapering its massive QE programme.