It’s a huge week for US economic data, with CPI inflation on Wednesday and retail sales on Friday. Following the shockingly disappointing jobs numbers lately, there’s less pressure on the Fed to scale back its QE program anytime soon, so the summer months could be difficult for the dollar. The US economy is still solid and the endgame is still a more hawkish Fed, but it will take longer to get there.

The notion that the Fed will begin to withdraw some liquidity this year suffered a serious blow last week after the latest US employment report fell short of expectations. The numbers showed that the US economy is not doing quite as great as most investors believed given the landslide of federal spending, vindicating the Fed’s own view that there’s still a long way to go until the labor market recovers fully.

Now to be clear, this was only one month’s worth of jobs data, so we shouldn’t draw any concrete conclusions from it. A range of other economic indicators suggest the American economy is still in good shape. That’s what the bond market seems to be signaling as well, with 10-year Treasury yields trading higher after the nonfarm payrolls data.

In other words, while one bad jobs report isn’t enough to derail the entire narrative that the Fed will begin to discuss tapering later this year, it is probably enough to delay it. This implies that the summer months may be a tough period for the dollar, even though the ultimate trajectory still seems positive.

Inflation to fire up, retail sales could disappoint

Considering this internal debate in the markets, the upcoming data points could be crucial. The inflation stats for April will hit first, with the headline CPI rate expected to skyrocket to 3.6% from 2.6% previously in annual terms. The core rate that excludes energy and fresh food is projected to climb to 2.3% from 1.6% in March. 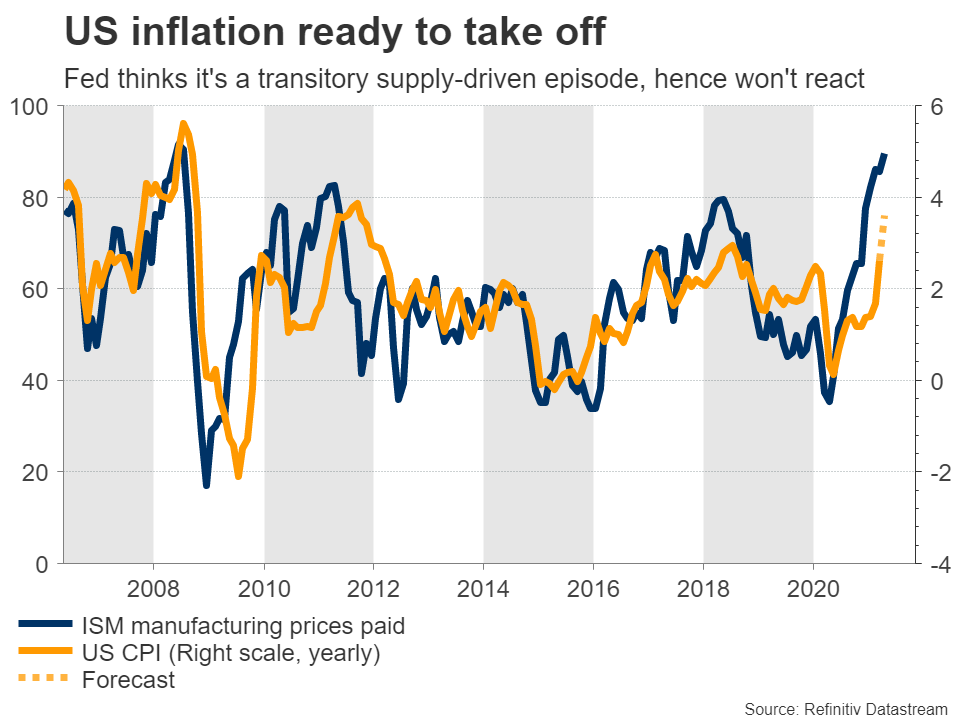 Normally, such prints would be screaming for policy normalization by the Fed. However, much of this acceleration in inflation comes down to soaring commodity prices, supply chain disruptions, and base effects after last year’s plunge. It’s not the healthy demand-driven inflation the Fed wants to see, so policymakers believe it will fade before long.

Meanwhile, retail sales for April will be released on Friday and forecasts point to another increase of around 1.0% from the previous month as the economy reopened and consumers spend their third stimulus check. That said, it wouldn’t be surprising to see a small setback either, considering how spectacularly strong the March print was.

Dollar may struggle for now, but against what?

In the bigger picture, with the Fed tapering discussion still being months from starting even as inflation accelerates, it is natural to expect the dollar to struggle for a while as real yields remain depressed. Even assuming that everything goes well with the economy, we probably won’t get any taper talk until late August or September.

So the dollar may struggle for a while, but against what? The European economy is still in dire straits and Japan’s vaccination rollout has been painfully slow. The answer may lie in the UK and Canada.

The British and Canadian economies are doing much better, leading the central banks of England and Canada to take baby steps towards ultimately normalizing monetary policy. Hence, pound/dollar and dollar/loonie may be better proxies for any short-term dollar weakness than euro/dollar or dollar/yen.

Taking a technical look at dollar/loonie, immediate support to declines may be found near the 1.2070 region, a break of which would turn the focus to the mid-2015 low of 1.1920.

On the upside, a rebound could see the pair edge towards the 1.2360 support-now-turned-resistance zone.