The latest employment data out of Canada – at 12:30 GMT on Friday – will reveal whether the economy remains an oasis of strength in an otherwise weakening global environment. Forecasts point to another decent month, but PMI surveys were not as optimistic, suggesting that a disappointment in the jobs data may be more likely. As for the loonie, the outlook seems negative. If monetary policy divergence wasn’t enough to propel the currency higher in recent months, it’s difficult to see what will.

The Canadian economy continues to perform better than practically all its major peers, though one would hardly know just by looking at a chart of the local dollar. Unemployment is near multi-decade lows, inflation is practically in line with the Bank of Canada’s (BoC’s) target, and economic growth seems to have picked up after a sluggish start to the year.

The upcoming jobs data for September are expected to confirm this cheery narrative. The unemployment rate is forecast to remain unchanged at 5.7%, and while the net change in employment is seen at only 10k, that follows a robust 81k last month – so it wouldn’t be worrisome. Yet, the risks around these forecasts may be tilted towards a disappointment, considering that the employment sub-index of Canada’s Ivey PMI for the month showed jobs growth contracting.

The BoC has therefore maintained a neutral bias lately, highlighting that even though global trade battles are feeding uncertainty, the solid domestic economy means there’s no need for rates to be cut. In an environment where practically all other major central banks are slashing rates, this would argue for the loonie to soar as interest rate differentials widen in its favor. 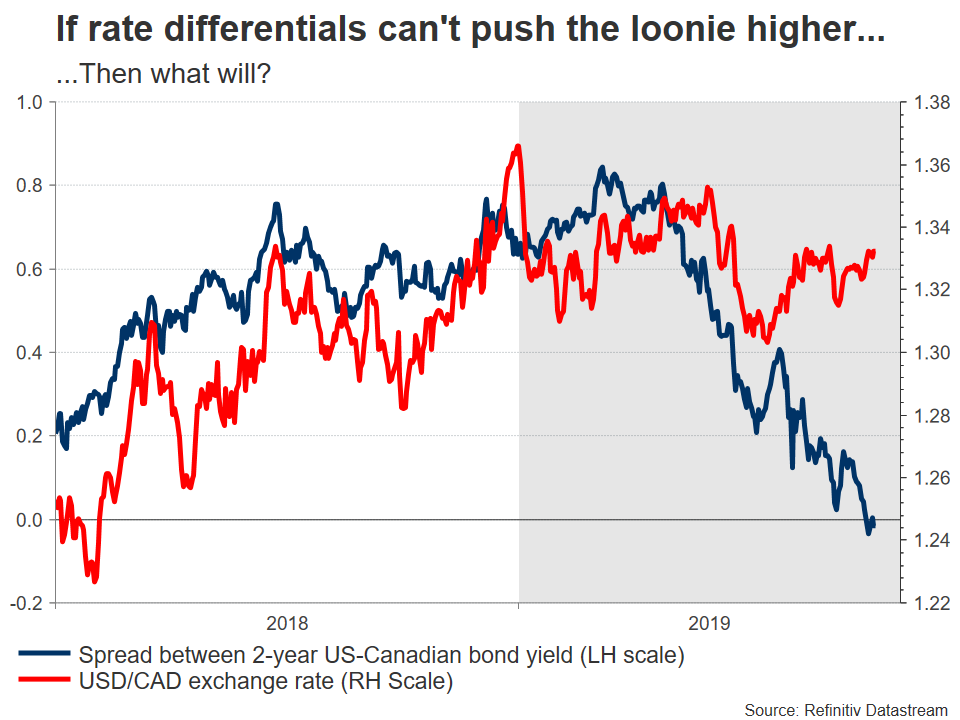 Yet, this has not materialized, with the Canadian currency mostly struggling in recent months. The two main reasons for this underperformance, have been broad based US dollar strength, and lower oil prices. Separately, investors might be wary that the trade war is bound to have spillover effects on the export-heavy Canadian economy at some point, especially if America slows further, hence not increasing their exposure to Canadian assets despite the attractive interest rates.

Turning to the loonie, the outlook is not particularly bright. Markets are still confident that the BoC won’t cut rates this year, assigning a mere 40% probability for such an action, which means the risk lies to the downside for the loonie. If economic data start to weaken for example, that would likely send BoC rate cut odds soaring and hence push the currency lower. To put it bluntly, if the BoC staying neutral all these months as other central banks eased policy wasn’t enough to propel the loonie higher, it’s difficult to see what will.

Perhaps a major pullback in the US dollar and/or a significant recovery in oil prices could do the trick, but neither of these seems likely for now.

Looking at dollar/loonie technically, a surge in the pair – for instance if the upcoming data disappoint – could meet initial resistance around 1.3350, with an upside break opening the door for a test of 1.3430.

On the downside, support may come from the 1.3200 region, where a negative violation would turn the focus to the September low of 1.3130.