The latest jobs numbers out of Canada are due on Friday at 13:30 GMT, and forecasts point to another month of solid employment gains. Even though the labor market has been on an absolute tear this year, the Bank of Canada (BoC) just signaled that it may cut rates anyway as insurance against the trade war. The implication is that a strong report may be unable to lift the loonie much, whereas a disappointing one could send it plunging.

In contrast to most major economies, the Canadian one continues to fire on all cylinders, taking little collateral damage from trade uncertainties and a worsening global outlook. The labor market has been robust both in terms of jobs gains and wage growth, inflation is almost exactly in line with the BoC’s target, and GDP growth is picking up again.

All this is not enough for BoC policymakers though, who at their meeting last week raised the alarm about the economy’s prospects. They emphasized the downside risks emanating from global trade conflicts, indicating that “the resilience of Canada’s economy will be increasingly tested” as this uncertainty persists. Governor Poloz even said that they debated an ‘insurance rate cut’ to safeguard the economy, but decided against it for now. 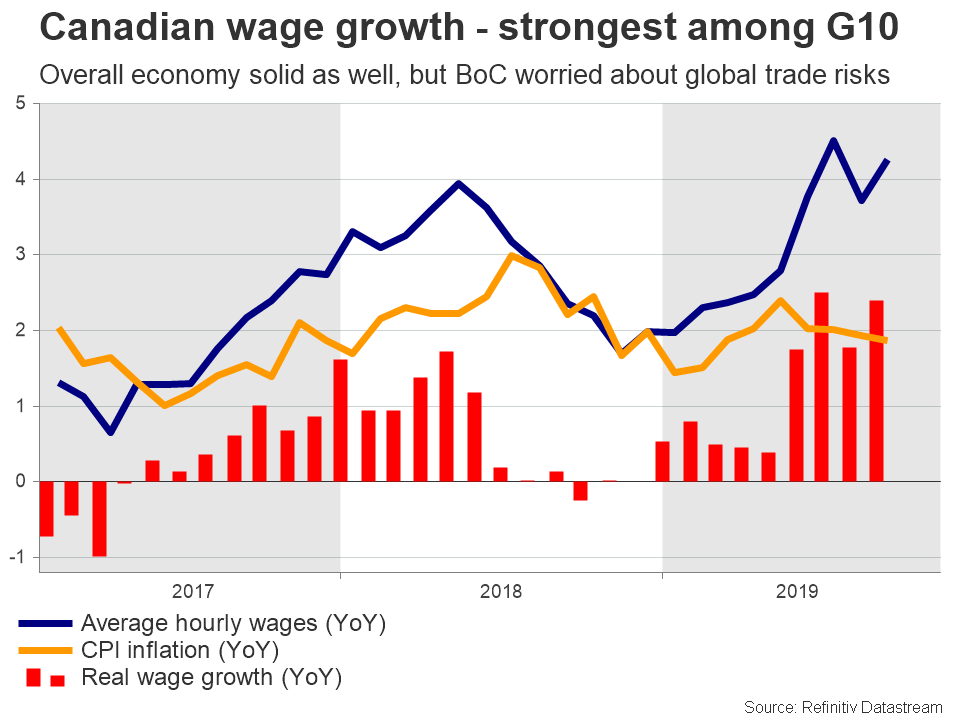 The takeaway was that it wouldn’t take much economic weakness for the BoC to slash rates in the coming months – the bar for that action is pretty low. As such, the risks surrounding the loonie going forward may be asymmetric and tilted to the downside. Continued strength in economic data could do little to convince the markets that the BoC won’t cut, hence generating only mild upside reactions in the loonie, whereas any softness could confirm that a rate cut is looming and thus push the currency substantially lower.

Markets currently assign a mere 17% chance for a cut in December, which rises to 40% when looking at the January meeting, so there’s still a lot of room for a near-term cut to be priced in if any ‘bad news’ starts rolling in.

This brings us to this week’s employment data. The unemployment rate is forecast to have held steady at 5.5% in October, while the net change in employment is expected to decline, but remain in positive territory. If met, such prints would reaffirm that the trend in job creation remains robust, and hence could push the loonie a little higher.

Taking a technical look at dollar/loonie, initial support to declines may come from the 1.3105 zone, where a break lower would open the door for the 1.3040 region.

In the shadow of the trade war

Even if we see a positive reaction this week though, any significant upside may be difficult to come by, and the risks increasingly look skewed to the downside. BoC rate cuts are definitely back on the menu, and the trigger for that may not even come from inside Canada – a reignition of trade tensions between Washington and Beijing could also do the trick. In this respect, the markets may currently be underestimating the likelihood of a BoC cut in the coming months.

Any signs that the BoC will cut rates could push dollar/loonie higher for a test of the 1.3200 handle. If buyers overcome that region, the attention would turn to the area around 1.3345.