Trade figures from the world’s second-largest economy will be released early on Friday, with forecasts pointing to a modest contraction in both exports and imports. Markets will scrutinize exports in particular, for any signs of damage from the recent escalation in the trade war. Besides the yuan, the China-sensitive aussie could also react to these data.

The trade ‘ceasefire’ between the US and China that was agreed in late June was greeted with relief in the markets, as it at least postponed any new US tariffs while the negotiations resume. Even though another escalation has been averted for now, it is becoming increasingly evident that this conflict is starting to take its toll on both economies.

American growth probably slowed substantially in Q2 according to Atlanta Fed models, with most of the weakness seen in manufacturing – where surveys show US firms citing tariffs and fewer orders from abroad as the root of their troubles. In turn, the Fed is now preparing to cut interest rates to cushion the economy.

On the Chinese side, the pain is even clearer, with producer prices barely rising and industrial production slowing drastically. Admittedly though, the policy response in China has been more proactive and coordinated, with the authorities adding both fiscal and monetary stimulus to counteract the negative impact. Investors will therefore watch these trade data closely, to gauge how much damage this skirmish is doing even despite the stimulus. 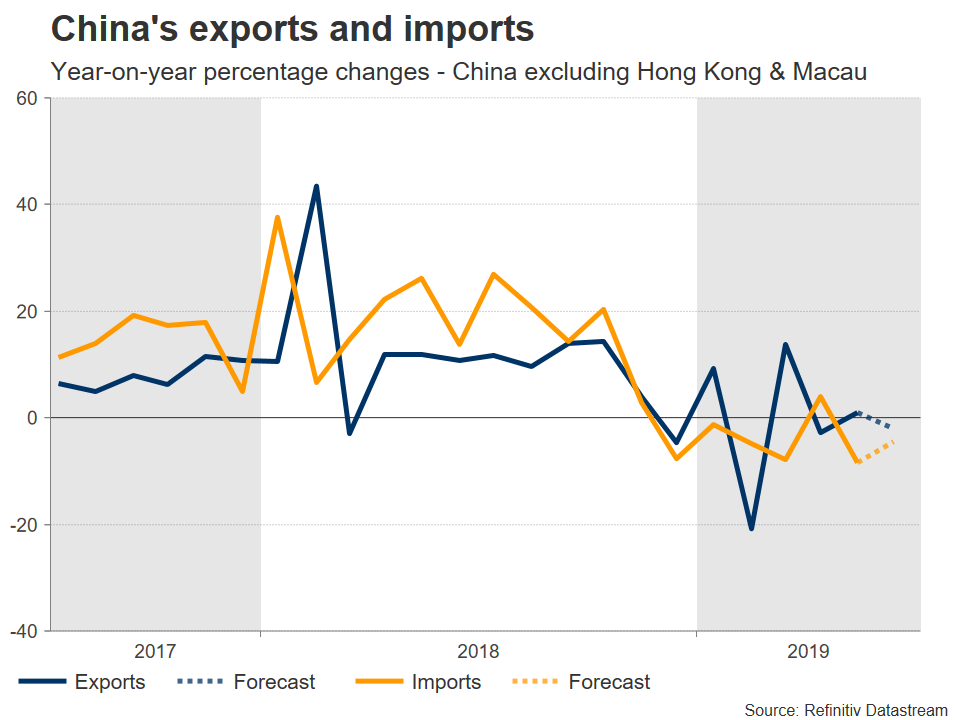 In June, China’s exports are expected to have contracted by 2.0% in yearly terms, after rising by 1.1% previously. Imports are also forecast to have fallen, albeit at a slower pace of 4.5%, compared to the 8.5% decline in May. The nation’s trade surplus is consequently expected to have widened, as imports are seen dropping faster than exports.

As for the market reaction, besides the yuan, these prints could also impact the Australian dollar. China and Australia have close trading ties, so the aussie is widely viewed as a liquid proxy for ‘China plays’. Traders favor it over the yuan not only due to liquidity, but also because shorting the Chinese currency implies taking on the extra risk of being caught on the wrong side of daily FX intervention by the nation’s authorities.

A stronger-than-expected data set, particularly on the exports side, could allay some concerns around the Chinese economy and thus help the aussie to recover a little. Taking a technical look at aussie/dollar, resistance to advances may be found near 0.6955, the inside swing low on July 1, with an upside break opening the door for 0.7050.

On the downside, a disappointing batch of data could see the pair slide further, with the June low of 0.6830 likely providing initial support.