The world’s second-largest economy will see the release of its industrial production, retail sales, and fixed asset investment data for August early on Monday, at 02:00 GMT. Forecasts point to a pickup in most indicators, which if confirmed, may signal that Beijing’s stimulus measures are finally starting to pay off. While that may help the China-sensitive aussie recover more ground, any signals around the upcoming trade talks could prove far more important for the Australian currency.

The Chinese economy slowed substantially in recent months, as the prolonged trade war with Washington started to take its toll on the broader manufacturing sector, pushing exports into contraction and causing industrial production to slow drastically. In another sign that demand is drying up, producer price growth also turned negative, indicating that factories are slashing prices to aggressively compete for new orders.

However, the upcoming data for August are forecast to bring this gloomy narrative into doubt. Both retail sales and industrial production are projected to have picked up steam relative to July, and even though fixed asset investment is anticipated to decelerate, it is seen only marginally slower. If these forecasts are met, that could signal that the fiscal and monetary stimulus measures adopted by the Chinese authorities over the past year are finally starting to pay dividends. 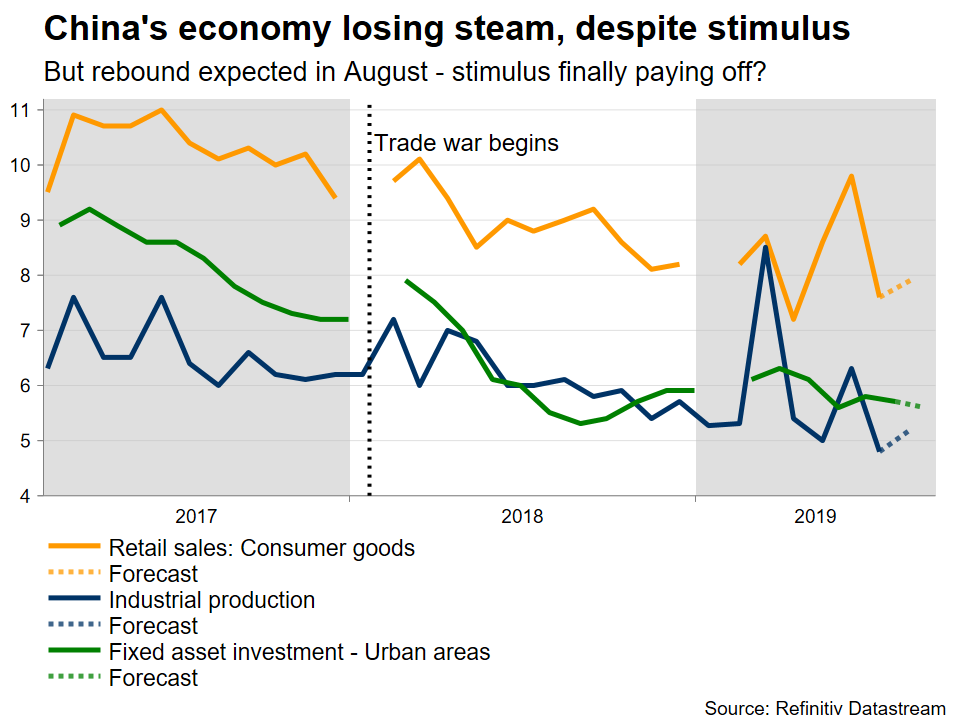 For markets, a rebound in most of these indicators could allay some concerns about a protracted slowdown in China, and perhaps help the Australian dollar extend its latest rebound. Australia and China have a very close trading relationship, so the aussie tends to be highly sensitive to developments in the world’s second-largest economy.

That said, a much bigger determinant for the aussie’s overall direction may be how the trade talks in October will play out. In recent days, not only have both sides dialed down the aggressive rhetoric, but also extended an olive branch to each other, with the US postponing its next round of tariffs and China exempting some US products from its own levies. This has elevated expectations for a breakthrough when the two teams meet early next month, helping the aussie to recover.

At this stage, it looks like the optimism could linger heading into the talks, especially if the two sides continue to paint an optimistic picture about a potential deal. That said, we have been down this path many times before, with cheerful rhetoric pushing risky assets and currencies higher ahead of the talks, only to end up with more escalation and fresh tariffs a few weeks later. As such, while the risks surrounding the aussie seem tilted to the upside ahead of the next round of negotiations, the same cannot be said for the currency’s path once they conclude.

Looking at aussie/dollar, immediate resistance to advances may come from 0.6905, the July inside swing low, with an upside break opening the way for the 0.7000 psychological handle.

On the downside, initial support could be found around 0.6820 – which capped advances in August – before the 10-year lows around 0.6685 attract attention.