GDP growth accompanied by industrial production, retail sales and urban investment readings will be out of China on Monday at 0200 GMT. Given the cloudy conditions on the trade front, the data are expected to reinforce speculation that extra stimulus may be needed to stabilize the economy in the coming months.

The last time the Chinese economy picked up steam was in the first quarter of 2017 when expansion topped at 6.9% on a yearly basis. Since then, GDP growth has been on a downward trajectory and markets are currently waiting for another soft release in the April-June quarter, with forecasts standing at 6.2% y/y compared to 6.4% in the January-March period – closer at the bottom of the 6-6.5% target set by the government.

Separately, the growth in factory output likely rebounded though not far from record lows, inching up by 0.2 percentage points to 5.2% y/y in June. On the other hand, urban investments in fixed assets are anticipated to come slightly weaker at 5.5% year-to-date, while on the consumption side retail sales are said to have lost steam as well, easing from 8.6% to 8.3% y/y. 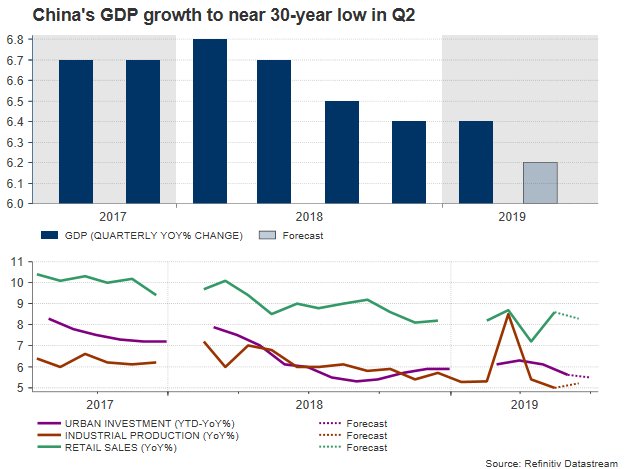 Speaking before the Congress on Wednesday, the Fed chief, Jerome Powell confirmed speculation that the central bank would likely cut interest rates at the end of this month for the first time in a decade to counterbalance the uncertainty around trade, the global growth slowdown and the weakness in inflation. Markets are now reasonably pricing that other central banks, including the People’s Bank of China could follow suit and step up support to their economies.

In the case of China, the PBOC has already taken some steps over the past year to keep output stable through cash injections and lower reserve requirements and short-term interest rates to help boost business lending. Nevertheless, the weakness in trade activities and the worrying decline in the Caixin manufacturing PMI in June which slipped below the 50 level that separates expansion from contraction shows that stimulus is probably insufficient and more easing in monetary policy may be needed if trade talks collapse once again. However, the mounting corporate debt suggests that the central bank could cut its benchmark interest rate (one-year lending rate) or/and decrease the reserve requirement ratio, though at a more gradual pace than the Fed, if the economy continues to lose momentum. Recall that the PBOC has not changed its benchmark rate since October 2015.

Turning to FX markets, besides the Chinese yuan, the Australian dollar could also tumble if China’s GDP growth arrives smaller-than-expected given the tied trade relation between the two.  A pullback could send AUDUSD below the 20-period simple moving average in the four-hour chart currently at 0.6954, while a deeper decline could retest the 0.6928 barrier.

Alternatively, a stronger-than-expected expansion in Q2 would reduce chances for further monetary easing, potentially pushing the pair towards the 0.70 level. Slightly higher, resistance could also appear somewhere between 0.7030-0.7040.