China is scheduled to report its trade statistics early on Friday at a time when Washington and Beijing are seeking to sign the so-called phase one deal possibly early next month. The results, however, followed by a not-so encouraging US trade report are expected to show that there is no winner or loser in this trade war, a sign that no side is likely to hold a negotiating advantage when the leaders finally meet.

Trade war did not bring the desired results so far

Trump started the trade war with the aim of reducing the massive deficit with China. After more than a year, the effects are not the desired ones as the US trade deficit with China is still within the $20-30 billion range on a monthly basis as it was prior Trump’s election. Instead, the US protectionism brought a sense of caution to global industries and raised fears of a recession amid signs that the tit-for-tat tariff game may not end anytime soon, with businesses keeping investment plans on hold and reallocating their operation to avoid extra costs as reflected by the down-trending PMI readings. Of course, when someone loses there is sometimes a winner on the other side and in this case it’s neither the US nor China but countries such as Taiwan and Mexico according to the latest UNCTAD analysis.

Meanwhile in China, the picture is not much different. Although the government has been backing infrastructure projects, reducing taxes and improving access to credit to prop up growth, economic expansion slowed to the lowest in more than 27 years in the second quarter.  On Friday, exports which are falling for the third year in a row are forecast to decline faster by 3.9% in October on a yearly basis compared to a 3.2% reduction in the previous month. Furthermore, imports are projected to have increased their negative momentum to -8.9% and while this is positive for the international trade surplus that is said to have increased to $40.83 billion in October, it is a negative sign for consumption which now accounts for 80% of China’s GDP. 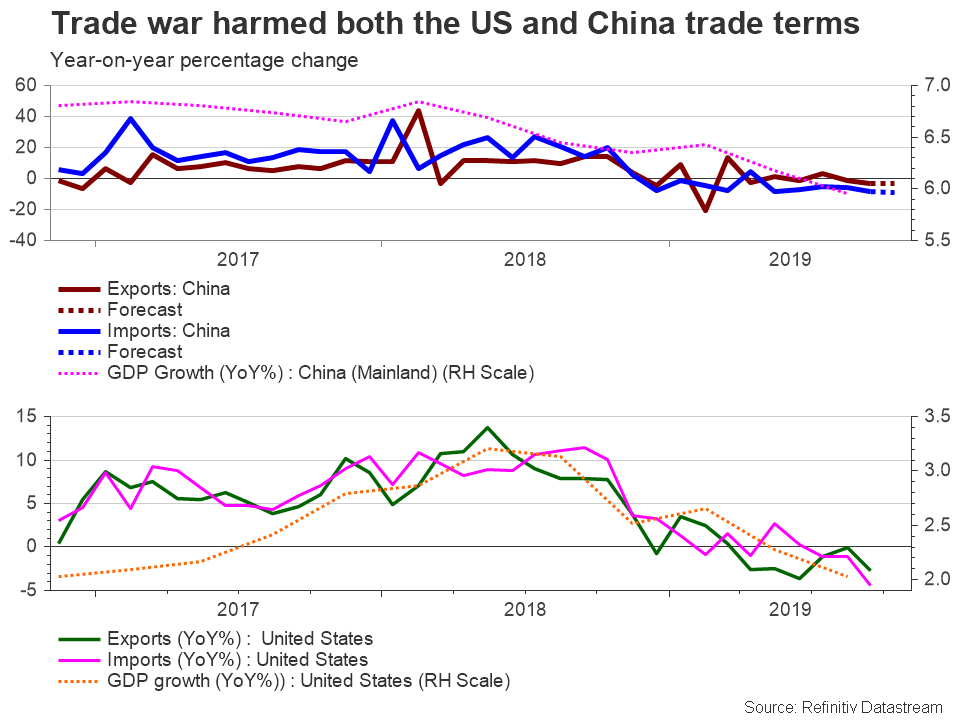 Phase one deal could be signed

With President Xi Jinping calling for multilateral cooperation at his speech in China’s International Import Expo on Tuesday and US elections in November 2020 pressuring Trump to find a compromise to please his supporters mainly in the agricultural industry that are heavily reliant on Chinese markets, a phase one trade deal seems likely to be signed as soon as next month. Under the agreement, China will buy $40-50 billion worth of US agricultural products in exchange for Washington lifting the October 15 import tariffs, and commit to protect American intellectual property rights, while both sides will try to not manipulate their currencies.

However, Xi will likely try to make sure that Trump will scrap plans for additional tariffs on $160 billion of imports on December 15 and at the very least roll back some former barriers before he gets on the plane.

The US president would likely cancel December tariffs as such a move would message markets that tensions have indeed eased, and the sides have found some common ground to move talks to the next phase which might be even more complicated since topics such as technology transfer will be discussed. As regards previous import tariffs, Washington could remove barriers – but only partially – to make sure that China will follow through with the agreement and at the same time provide some relief to US farmers while sticking to Trump’s promise to improve trade terms with China.

Turning to Friday’s data, should the numbers come in line or below expectations, China’s negotiating hand would not strengthen but neither the US would have the freedom to move as it desires. In this case, the Australian dollar, which tends to react on Chinese data due to Australia’s close trade ties with the world’s second largest economy, could head south though not much as such an outcome would also mean that Beijing may not put much pressure on Washington when the leaders meet later this month and therefore an agreement could be less difficult to reach. Against the US dollar, the aussie has been lately facing support within the 0.6880-0.6860 area and only a violation of this region could bring more downside to the market.

To improve its negotiating position, China must report strong trade numbers, but with tariffs weighing on business activities, a significant upside surprise looks less likely. Nevertheless, AUDUSD could gain some buying traction to retest resistance between 0.6930 and 0.6950.