Chinese trade data eyed as tensions with the US look set to escalate; Aussie also in focus – Forex News Preview

Chinese trade figures for August will be made public on Saturday, with the numbers being scrutinized for any negative effects stemming from US tariffs. Meanwhile, the latest developments in the Sino-US trade spat are also putting the release high on investors’ radar. Elsewhere, attention will also turn to the Aussie due to its status as a barometer of broader risk sentiment, as well as Australia’s China-dependency which has rendered its currency as a liquid proxy for China “plays”.

Analysts’ are forecasting China’s exports and imports to have risen by 10.1% and 18.7% y/y in August respectively, below July’s pace of growth of 12.2% and 27.3%. Despite the projected deceleration, if the two meet or come close to forecasts, this would still constitute a robust set of prints. Meanwhile, the nation’s trade surplus (measured in USD) is expected to widen to roughly $31.8 billion from around $28.1bn in the previously tracked month. 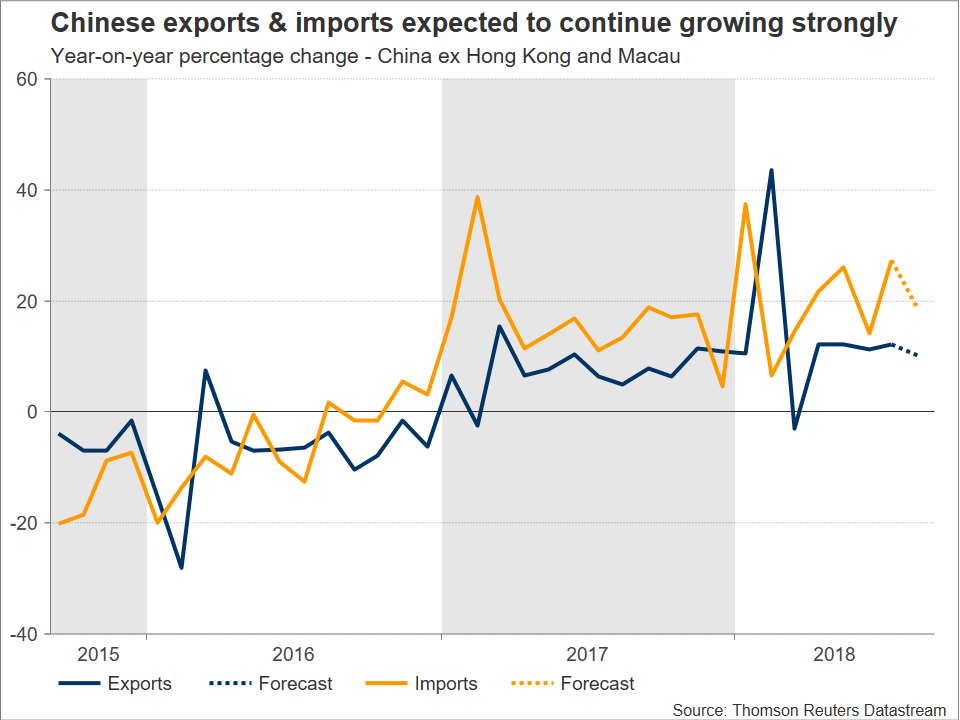 Export growth so far appears to remain largely unaffected by levies on billions of dollars of shipments to the US. Still, it is too early to conclude that this will continue holding true, especially if one factors in that the US may well ratchet up its tariff game. In this respect, the public comment period for proposed US duties on an additional $200 billion in Chinese imports has just expired. President Trump signaled willingness to push forward with these additional levies by the end of the aforementioned period. Although his administration has yet to do so, still there is angst in markets that such a move could materialize soon.

It is of note that trade data out of the US earlier in the week, showed the trade deficit on goods with China rising to a record-high $36.8bn in July, something which might lend fuel to Trump’s confrontational stance with the country. Also worth mentioning, the US’ relevant gap with the EU also touched an all-time high of $17.6bn; the bloc has also been on the receiving end of firing shots by the US president on trade.

Both the onshore (depicted below) and offshore yuan have appreciated from their weakest levels since January 2017 versus the greenback hit in mid-August on the back of worries over trade and the associated negative effects on the Chinese economy. The partial recovery was aided by some efforts by the PBOC to support the currency. Still, resurfacing trade jitters are likely to weigh on the yuan. 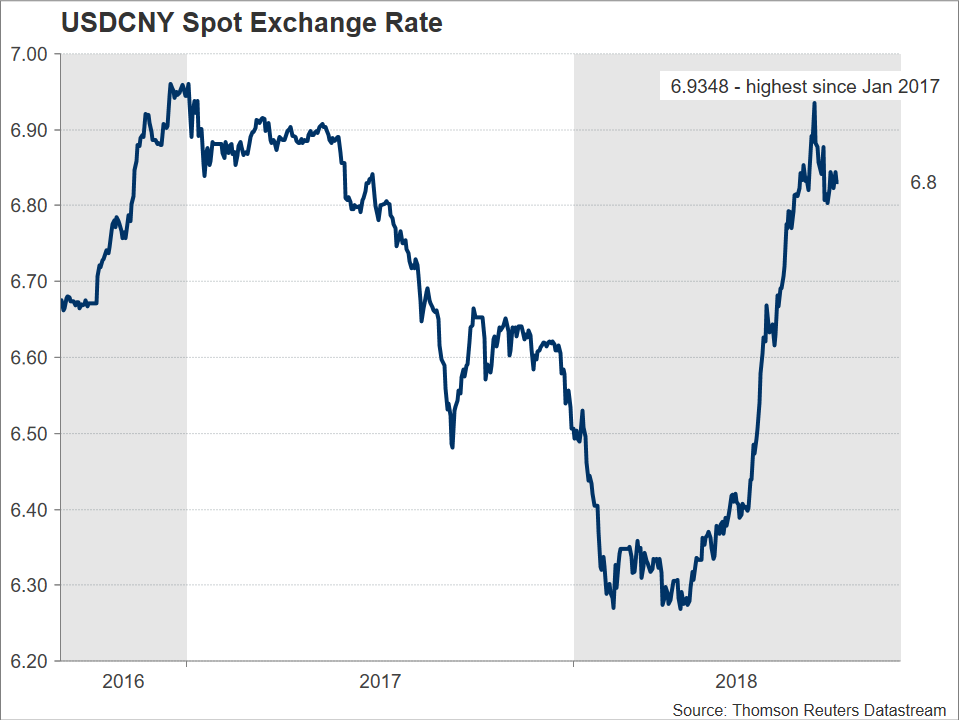 Staying in currency-land, the Aussie will also be monitored when markets reopen for trading on Monday in the aftermath of the Chinese releases, while updates on the Sino-US trade dispute can well affect the currency as well. This is owed to Australia’s heavy export dependency – a rosier outlook on global trade and growth is seen as positive for the Aussie – but also due to its close economic ties with China. As a testament to the latter, figures released on Thursday out of Australia showed the nation enjoying a record trade surplus with China year-to-date.

Encouraging Chinese data or easing trade tensions may push AUDUSD higher. Resistance to gains may take place around the 0.72 round figure. Steeper gains could shift the focus to the zone around the current level of the 50-day moving average line at 0.7345 which was relatively congested from late June to early August, given that the 0.73 handle is broken first.

Conversely, disappointing numbers or an intensifying trade row between the US and China could exert downward pressure on the pair. If the price falls below 0.7136, this being a nadir last experienced in March 2016, additional support may occur around the 0.71 round figure, with the 0.70 mark coming into scope in case of sharper losses.

The Australian currency trading at two-and-a-half-year lows against the US dollar is attributed to a number of factors. Growing concerns over global trade and rising variable rate mortgages by some of the country’s largest banks – that are seen as hurting household spending – are some of those factors.

Lastly, China’s producer price index (PPI) and consumer price index (CPI) for August will be hitting the markets on Monday at 0130 GMT. Factory prices, as gauged by the PPI, are anticipated to expand by 4.0% y/y, at their slowest since April. In terms of CPI inflation, it is expected to grow by 2.2%, at its fastest pace since February. 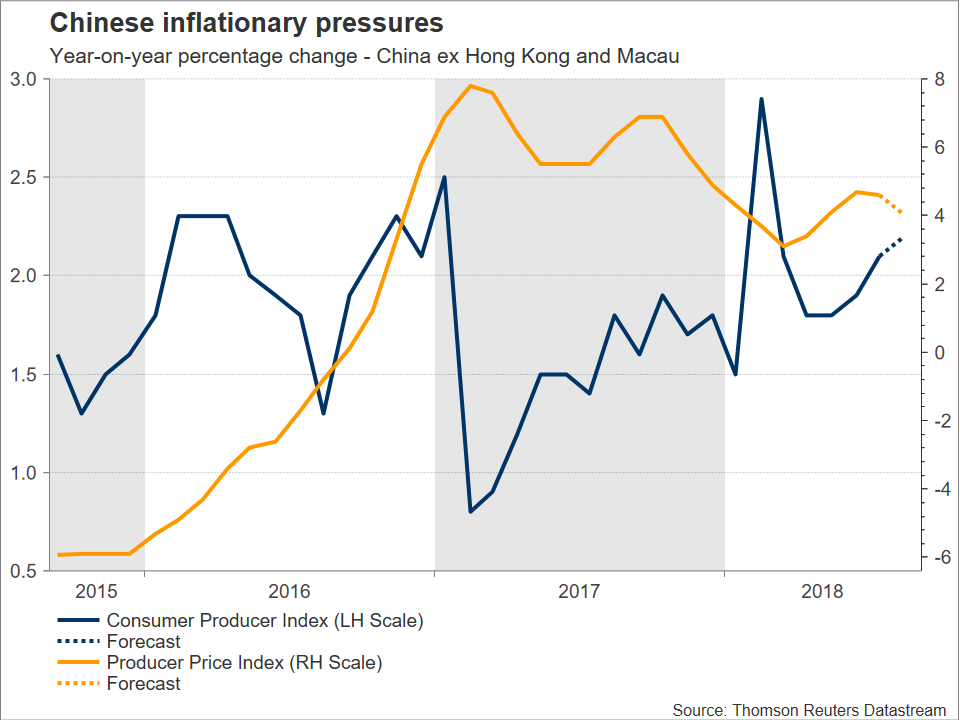