The fourth-quarter earnings season is upon us, and as usual, the big US banks will get things started. JPMorgan, Citigroup, and Wells Fargo will all report on Friday before Wall Street’s opening bell. Their results could shed some light into how the financial sector is doing and how the US consumer is holding up. Overall, the banking sector has recovered very powerfully lately, and should the Democrats unleash a tsunami of federal spending soon, the good times could keep rolling.

Shares of the major US banks took a severe hit from the pandemic storm, and most haven’t even recovered fully yet. The recession sparked fears of a potential wave of loan defaults, and the overall banking industry tends to suffer in periods when interest rates are very low.

Banks typically make most of their profits from net interest income, which means the spread between the rate they loan money out minus the interest they pay on deposits. With the Fed signalling that rates will remain near zero for several years, this spread that banks live off has narrowed dramatically, compressing profits. 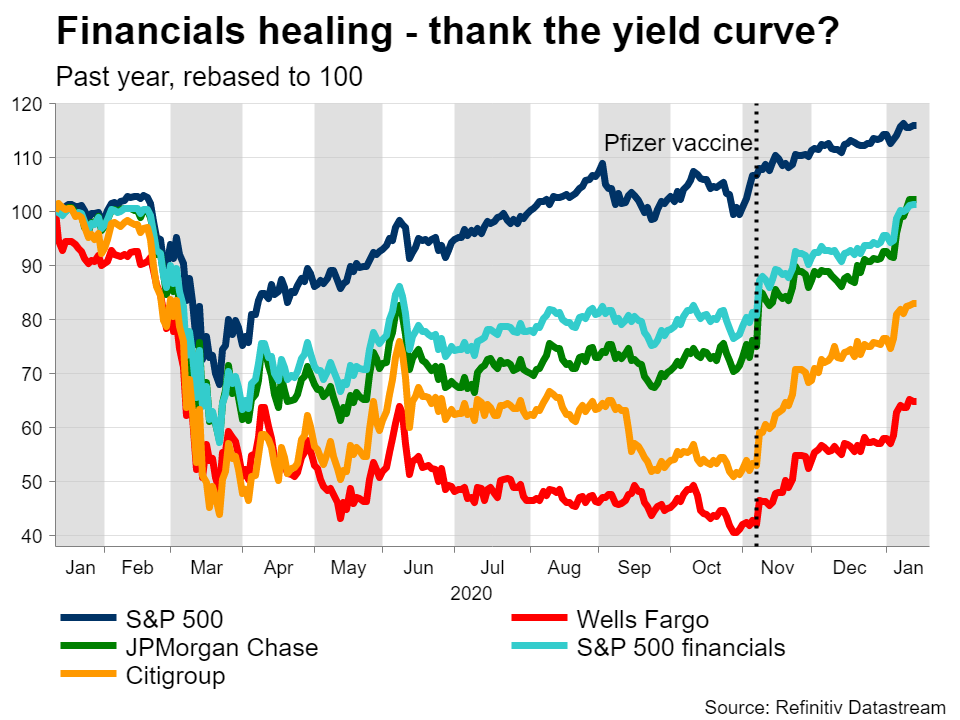 But all that began to change in recent weeks. With the Democrats taking the Senate, markets started pricing in a massive spending spree that boosts US growth and ultimately leads the Fed to normalize rates quicker. This caused the so-called ‘yield curve’ to steepen, which typically improves banking profit margins. On top of that, the Fed announced it will lift the ban on stock buybacks it imposed on banks last year, allowing share repurchase programs to resume.

Reflecting all this, most banking stocks have staged a powerful bullish run lately. In fact, financials have been outperforming the broader S&P 500 ever since the US election and the original vaccine news in November.

The biggest American bank in terms of assets is expected to report earnings per share (EPS) of $2.62 for the quarter that ended December, which would represent a 2.1% increase from the same quarter last year. However, revenue is expected to have fallen by 1.7% over the same period to $28.7bn.

Still, the fact that JPMorgan can increase profits during a year like last one shows incredible resilience, which likely comes down to its investment banking services and trading arms doing phenomenally well. In other words, the pain from its traditional banking services has been more than offset by the surge in its trading business. 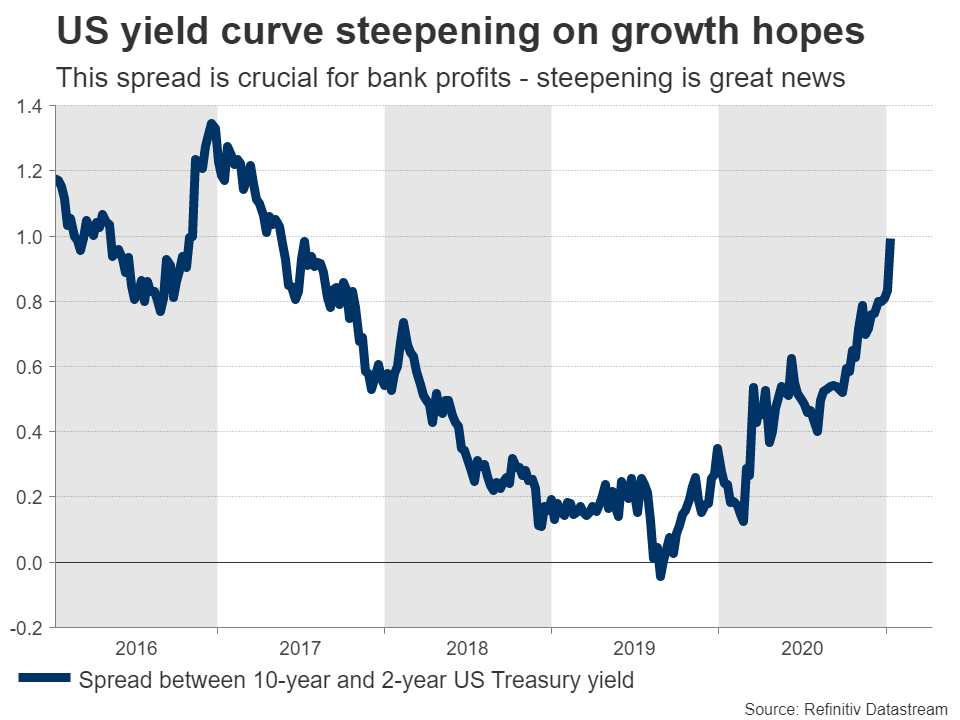 Plus, the moment the Fed lifted its ban on banking share buybacks, JPMorgan immediately unveiled a $30 billion repurchase program, effectively establishing a floor of sorts under its stock. Additionally, the Bank had set aside massive amounts to absorb loan losses during the pandemic, but it seems those losses will be much smaller than expected, especially now that more federal relief is coming. If these losses don’t materialize, those ‘reserves’ could be released and artificially inflate earnings going forward.

In terms of valuation, there is not much to note. The bank is trading at 14.4x forward earnings, which is almost in line with the 14.8x of the broader financial sector.

The fourth-largest US bank was among the worst performers on Wall Street last year. The first part is that Wells Fargo is much more exposed to retail banking compared to other major banks, and that segment has been suffering. In contrast, many of its competitors have massive trading arms to rely on for revenue in dark times. The second part is that Wells Fargo is still being punished for the legacy of the 2016 fake accounts scandal, after which the Fed imposed a limit on the maximum assets the bank can hold. That limit is still in place.

For the latest quarter, Wells Fargo is expected to report EPS of $0.59 on revenue of $18.1bn. These numbers would represent a 36.8% fall in earnings and an almost 9% decline in revenue from the same quarter in 2019. While the bank has been trying to optimize its costs lately, it is almost impossible to ‘balance the ship’ with an asset cap in place during a crisis. 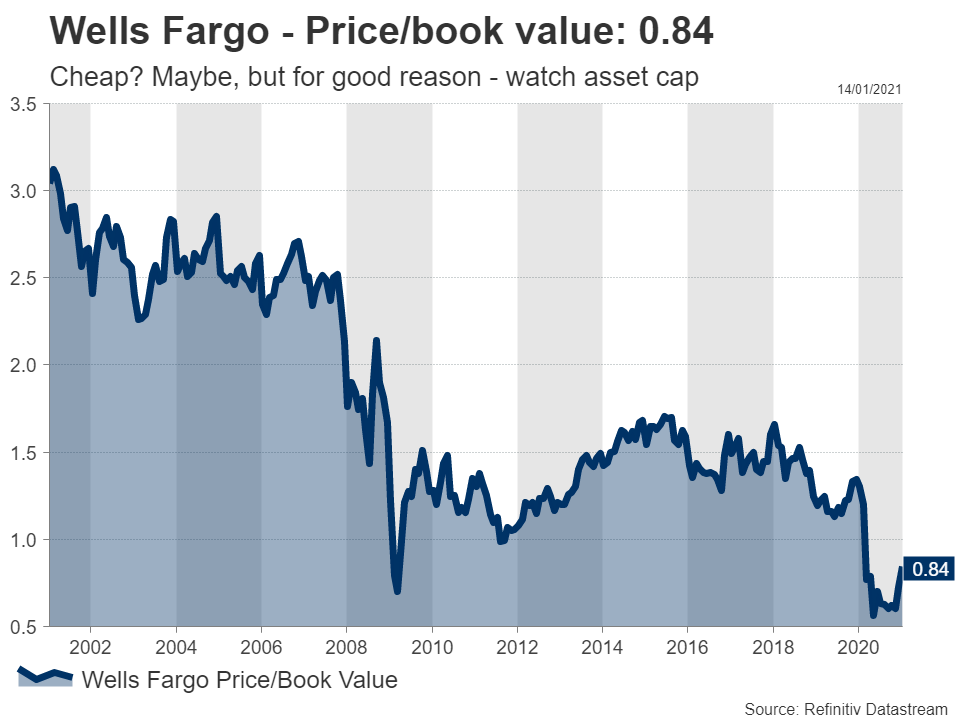 Ultimately, this asset cap will be removed and the Bank will be allowed to grow its asset footprint again, likely setting the stage for a powerful rally in the stock. However, this could still be months, if not years away.

Citigroup – On a tear

Shares of the third-largest American bank remain well below their pre-pandemic levels, but that doesn’t tell the whole story as in recent months Citigroup’s shares have performed the best out of the banks we have covered so far, having risen some 60% since November.

Citi had set aside some of the biggest reserves among banks to cover potential loan losses, but with expectations for a stronger economic recovery building, investors are hopeful that most of that won’t be used and may come back to boost earnings. In addition, Citi is expected to benefit from stellar trading results, with that business segment expected to have almost tripled from a year ago.

That being said, the forecasts for the bank’s overall top and bottom lines in Q4 are not pretty. Expectations are for EPS of $1.34 on revenue of $16.7 billion, representing a 37.8% decline in earnings and a 9.1% fall in revenue from the year-ago quarter. Admittedly, the consensus is so grim that it might be relatively easy for the bank to beat such a low bar.