The US government is announcing nonfarm payrolls this Friday at 12:30 GMT and earlier signs of a manufacturing recession have raised concerns that a miss in forecasts is possible. The dollar, though, is likely to hold firm as weakness in other major markets bodes well for its relative performance.

In September, the US economy is said to have created 145k new job positions compared to 130k registered in the preceding month, maintaining the unemployment rate stable at the almost 50-year low of 3.7% and keeping average hourly earnings flat at a decade high of 3.2% year-on-year. 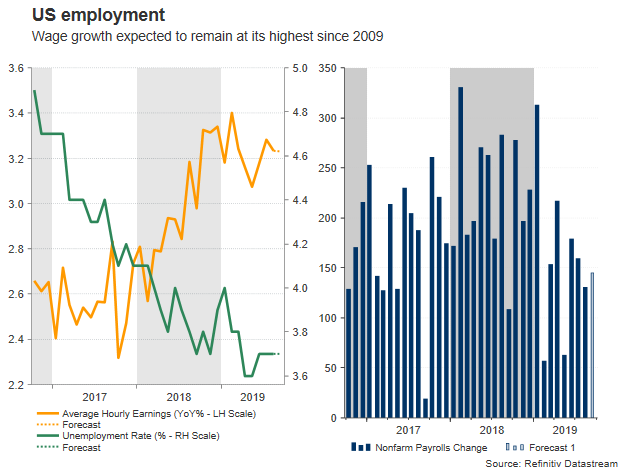 While the numbers continue to flag a healthy labor market, the report comes amid growing fears that business conditions not only in the US but also in other key economies have further deteriorated on the back of the endless trade uncertainty that weighs on companies’ appetite for investment.

On Tuesday, the ISM survey for the month of September found that the US manufacturing sector contracted for the second time in a row at the fastest pace since the financial crisis, with the relative PMI index slipping to 47.8 – a reading below 50 indicates a contracting industry. More importantly, the employment gauge for the sector retreated to the lowest level since 2016, while new export orders and imports also declined across the board.

The ADP employment report, which tracks employment changes only in the private sector, added to the negative sentiment on Wednesday, showing that the pace of hiring is softening even if the figures arrived more or less in line with expectations. The ISM non-manufacturing PMI released on Thursday fell short off expectations but remained above 50. 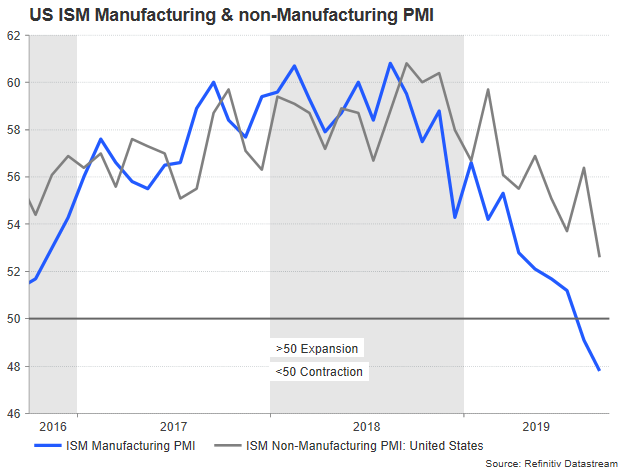 Unlike other economies, the US has relied little on fiscal expansion and more to monetary easing, a sign that the ball is in the Fed’s hands to save the country in case of a sharper slowdown. The central bank has already cut interest rates twice by 25bps and is projected to proceed with another one by the end of the year according to the Fed funds futures. Yet for policymakers to deliver two rate reductions in a row, the upcoming data, including Friday’s nonfarm payrolls report as well as inflation and retail sales should disappoint significantly and particularly point to declining consumption, while further escalation in trade tensions could play a bigger role.

Currently, the US is in a relatively better position than its European and Asian counterparts as regards overall economic conditions and the fact that interest rates are the highest among other G10 economies makes the country a more attractive and safer place for deposits. Hence, unless data releases and/or political developments switch the Fed’s vision on the US economy to the worse, bringing sharper rate cuts to the table, investors will hold confidence in the country and keep buying the greenback.

Regarding the dollar’s reaction on Friday’s NFP report, the currency could strengthen negative momentum in the event of a big negative surprise (probably if jobs growth falls below the 100k threshold) but it could soon recoup its losses as long as the Brexit deadlock and stagnation in Germany continue to weigh on the euro and the pound.

Alternatively, an encouraging employment report could push USDJPY above 107.00 and towards 107.50, while a steeper rally may also challenge the 108.00 mark.

Should the figures remain within the current comfort zone, the dollar may not react much.