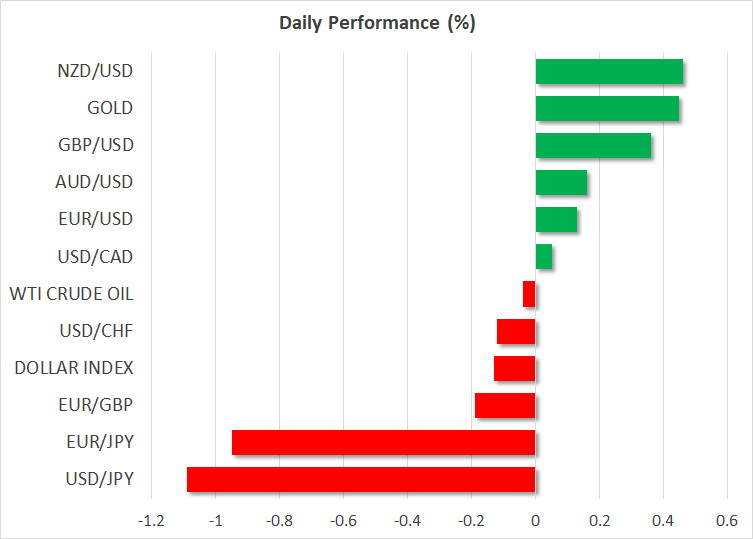 The US dollar tumbled against all the other major currencies on Wednesday and continued to drift south today after Fed Chair Powell failed to sound as hawkish as expected.

The Fed Chief confirmed the narrative that the Committee could slow the pace of its interest rate hikes “as soon as December”, adding that the fight against inflation was far from over. Although this view was largely expected and communicated by several other of his colleagues, he also said it remained an open question how high interest rates will need to rise to control inflation and how long they will need to stay at a restrictive level.

At the press conference following the latest gathering, Powell said that it is very premature to be thinking about pausing, adding that the terminal level of interest rates may be higher than previously estimated. On the terminal level, yesterday he said that it could be “somewhat higher” than the 4.6 % indicated in the September projections.

With many market participants expecting him to clearly push back against a pivot, the fact that he is now thinking about what happens to interest rates when they hit their terminal level and how high that level might be, may have been interpreted as a shift to a softer stance compared to that adopted at the press conference of the latest decision.

Ahead of yesterday’s speech, market participants were seeing a terminal rate of slightly above 5% in June, while today, they are expecting rates to peak at around 4.90% in May. What’s more, despite Powell saying that they are hoping not to “overtighten”, because cutting rates is not something they want to do soon, investors continue to price in nearly two-quarter point cuts by the end of the year.

This likely indicates that the market is stubbornly sticking to its guns and is avoiding altering its view when Fed officials push back against it, while waiting for the Fed to slowly lean towards it. That’s why investors may be keener to react more on dovish rather than hawkish data and remarks. The dollar strengthened when officials pushed back against pivot bets, but the advances were not as large as the slides triggered by comments and indications confirming such expectations.

With the market staying convinced that the Fed may be forced to cut interest rates towards the end of next year, the dollar could continue sliding for a while longer, while equites may extend their latest recovery. Yesterday, all three of Wall Street’s main indices gained more than 2% each, with the interest-rate sensitive Nasdaq rallying 4.41%.

Yet, the discussion of a full-scale bullish reversal remains premature. For now, data and remarks enhancing the view of slower Fed hikes and a lower terminal rate are cheered by equity investors as lower interest rates mean higher present values, especially for firms valued by discounting expected cash flows for the months and years ahead. However, although weak US data add to the notion of a slower rate path hereafter, a damaged economy is far from a positive development for the stock market. Thus, in case the economic outlook deteriorates further, the market impact of weak data on equities may well change.

The next big test for dollar traders and equity investors may be the US employment report for November, due out on Friday. Although the forecasts point to a decent report, the weaker than expected ADP release for the month shifts the risks to the downside. Therefore, a negative surprise could well extend the dollar’s downside correction and the recovery in stock markets.

Ahead of Powell’s speech, investors got busy adjusting their bets with regards to the ECB’s future course of action after Eurozone’s headline inflation slowed by more than anticipated. While they were nearly certain that the ECB will deliver its third consecutive 75bps hike in December at the beginning of the week, they shifted to a coin toss between 50 and 75bps on Tuesday after the lower-than-expected German inflation prints, and now, after the data for the whole Euro area, they are almost convinced that a 50bps hike may be the wisest choice.

Yet, that was not reflected in euro/dollar at the time of the release. Perhaps due to the acceleration in the core rate, some traders maintained the view that the ECB may need to deliver more basis points worth of hikes than the Fed henceforth, even if it slows to 50bps in December. Indeed, money markets are pricing another 140 basis points before interest rates peak in the Eurozone, while they are expecting only another 110 in the US. Such pricing may keep euro/dollar under buying interest for now.

The yen is today’s main gainer so far, as falling Treasury and relatively stable JGB yields result in narrowing differentials. With the yen losing the most ground on the back of an ultra-hawkish Fed, it may now be the most attractive major currency in terms of a risk-to-reward ratio. 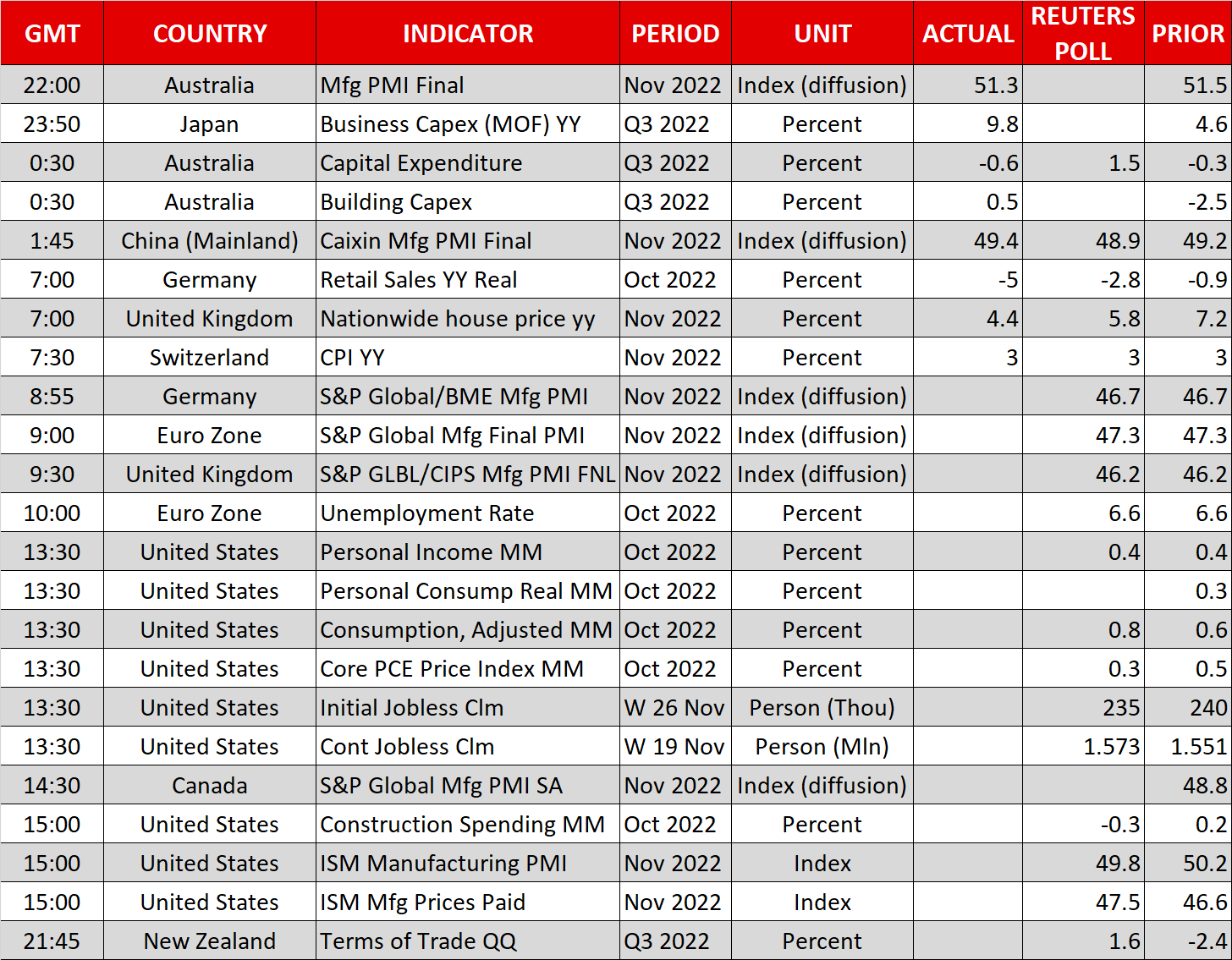