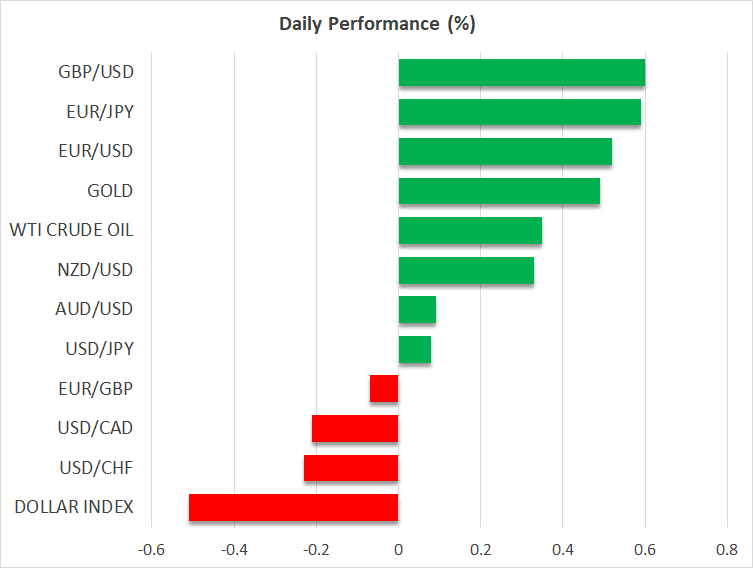 Equities finished the first trading day of this year’s final quarter on a positive note, with all three of Wall Street’s main indices gaining more than 2% as Treasury yields pulled back on the larger-than-expected slide in the ISM manufacturing PMI.

Oddly enough, it seems that negative US economic releases are now having a positive effect on equities as they may be a reason for Fed officials to slow down their future rate increases. Thus, more data suggesting deeper-than-expected economic wounds may result in a similar market reaction.

Having said all that though, with the S&P 500 and Nasdaq still in a bear market – only the Dow Jones escaped slightly yesterday – it is too early to call for a trend reversal. After all, Friday’s US jobs report is expected to reveal another round of healthy employment gains, which combined with hawkish remarks by Fed officials who are scheduled to speak ahead of the release, could revive expectations of more aggressive tightening and thereby bring equities back under renewed selling interest.

In the FX world, the US dollar traded on the back foot against most of its major peers, with the pound being among the currencies that took great advantage of the greenback’s retreat. The British currency extended its stellar recovery generated by the BoE’s decision to proceed with emergency bond purchases in an attempt to ease the market turmoil sparked by the government’s budget announcement. What added extra fuel to the advance were reports of a U-turn by the government on the matter of abandoning the top rate of income tax.

Further reports and announcements that the government is working towards averting its debt from becoming unbearable could add more support to the pound. However, with the UK PMIs suggesting that the economy contracted during Q3, the nation may be approaching a state of recession; and with the BoE expected to tighten even more aggressively at upcoming meetings, pound traders may not be that excited. More aggressive tightening could worsen the economic outlook and thereby result in another round of pound selling.

During the Asian session today, investors took their eyes off the US and the UK, and turned them to Australia, with the RBA deciding to slow its pace of tightening, raising rates by 25bps. Officials said that they did so because the cash rate has been raised substantially in a short period of time, but they left the door open to more increases.

The Australian dollar fell at the time of the decision, with its traders adjusting their rate path projections. They are now anticipating only another 100bps of increases, with the peak expected to be reached in June.

The central bank torch will now be passed to the RBNZ, which decides on rates during the Asian session on Wednesday, with investors fully pricing in a 50bps hike, but also assigning a 30% chance to 75bps. Last week, RBNZ Governor Orr said that New Zealand’s tightening cycle is mature and thus, the spotlight may fall on the Bank’s forward guidance. Anything suggesting that they may also slow down their future path could add pressure to the kiwi.

Oil prices gained nearly 3% yesterday, aided by reports that the OPEC+ group is considering output cuts of more than 1 million barrels per day, while gold earned around 2.5%, extending its advance today, perhaps boosted by the dip in the US dollar and the pullback in bond yields. With the US 10-year Treasury benchmark yield falling to a more than one-week low, traders may have temporarily fled to zero-yielding assets, like gold.

Interestingly, silver saw much more demand, rising around 10%. Maybe some investors took into account that the gold-to-silver ratio reversed south after peaking on September 1, which means that silver has been performing better than gold since then.