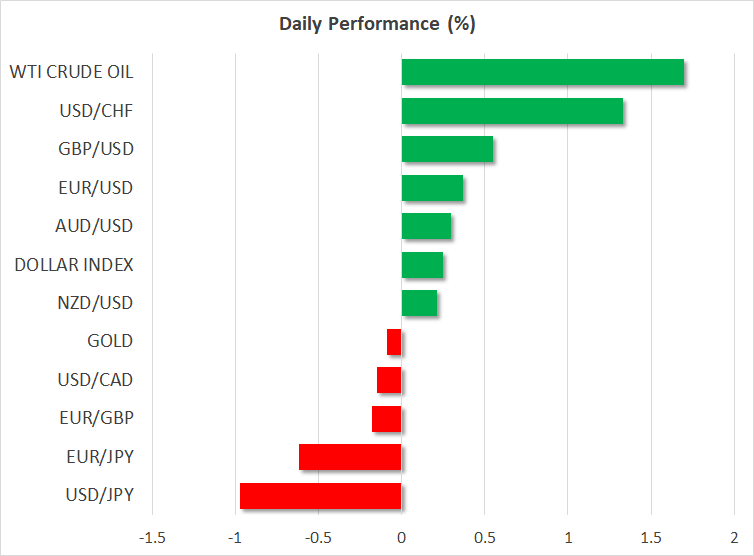 The Federal Reserve delivered its third consecutive 75-basis-point rate increase on Wednesday and flagged more sharp hikes in the remainder of the year. Some traders had been anticipating a full percentage point increase, but the disappointment was more than made up for by the hawkish projections in the updated dot plot.

FOMC members upped their predicted terminal rate from 3.8% to 4.6% in 2023 and don’t foresee a rate cut until 2024. Investors, in contrast, saw the Fed funds rate peaking at 4.5% and rate cuts in the second half of next year prior to the meeting. But what was also startling for the markets was the year-end projection for 2022 as the Fed pencilled in a rate of 4.4%.

This suggests that the door is wide open for another 75-bps increment in November. Add to that some very hawkish remarks from Chair Jerome Powell in his press briefing and there was very little for investors to cheer about.

Powell for the first time acknowledged that it may not be possible to achieve a soft landing for the economy when the priority is on restoring price stability and this commitment was underlined in the dot plot forecasts that unemployment would rise next year.

Treasury yields surged following Powell’s unwavering pledge to get inflation down, although the moves were more notable at the shorter end of the curve. The two-year yield hit 4% for the first time since 2007, steepening the inverted yield curve.

Unsurprisingly, stocks on Wall Street caved in and the US dollar catapulted higher in the aftermath. The S&P 500 dropped 1.7% at the close, increasing its losses from last December’s all-time high to more than 20%, meaning the index is technically in a bear market for the first time since July.

The dollar index, meanwhile, jumped to a fresh two-decade high, breaking above the 111 level, but its ascent came to a sudden halt on Thursday after the Bank of Japan intervened on behalf of the Japanese government to prop up the yen. The greenback had earlier risen as high as 145.89 against the yen to a fresh 24-year peak after the BoJ left its monetary policy settings unchanged and maintained its easing bias.

Governor Kuroda even stated in his press conference that the Bank had not received any requests from the government to intervene in the FX market even though Japan’s top currency official had earlier in the day warned that it could act at “any time”. The shock move – the first since 1998 – certainly appears to be working for now, sending a clear signal that 145 yen is the government’s tolerance level.

Franc underperforms after SNB disappoints, BoE coming up next

Dollar/yen was last trading more than 2% lower around 141 and other majors were gaining too on the back of Japan’s intervention.

The euro firmed to just below $0.99 as ECB policymakers maintained their hawkish rhetoric, while the pound reclaimed the $1.13 handle after both had plumbed fresh lows.

The Bank of England is widely expected to raise interest rates later today and the size of the hike could determine whether sterling can extend its rebound. Market odds of a 75-bps hike have been gaining ground in recent days but after the Swiss National Bank disappointed today by raising its policy rate by only 75 bps instead of 100, it’s not certain what the BoE will do.

It's worth pointing out that the BoE’s decision comes before tomorrow’s mini budget by the new UK chancellor so if that turns out to be very stimulative for the economy, policymakers would not have taken that into their consideration.

As the dollar pulls back, the Swiss franc stood out as the worst performer, weakening above the 0.96 level against the euro.

Gold jolted by Fed and geopolitics

In commodities, gold settled in the $1,670/oz region after see-sawing erratically over the last 24 hours. Geopolitical jitters following Russia’s announcement of a partial mobilization and referendums on annexation in the occupied parts of Ukraine have subsided for now. Markets are taking comfort in the fact that Western leaders have not been particularly alarmed by Putin's latest actions and see it as a sign that his one-man war on Ukraine is not going according to plan.

Nevertheless, tensions remain somewhat elevated and unless the dollar can stage another powerful rally, gold should be able to hold onto its support just above $1,650/oz in the near term.