UK inflation to accelerate; What does this mean for the pound? – Forex News Preview

The UK has been in the spotlight recently, with Liz Truss becoming the nation’s new prime minister last Monday, and Queen Elizabeth passing away on Thursday. Although the BoE gathering – initially scheduled for Thursday – was postponed for next week due to the queen’s death, pound traders have good reason to stay in front of their screens this week as well, as on Wednesday at 06:00 GMT, UK inflation data for August is coming out.UK inflation expected to accelerate further

After surging into the double digits in July, the headline UK CPI is forecast to have ticked up to 10.2% year-over-year from 10.1%, with the core rate expected to rise as well. Although this suggests that energy-related effects are not the sole driver, they remain a major one despite Britain importing only around 4% of its gas from Russia. The UK’s largest supplier is Norway, and with European nations now having to fill the gap created by Russian supply shortages from there, Norwegian gas prices have soared as well. 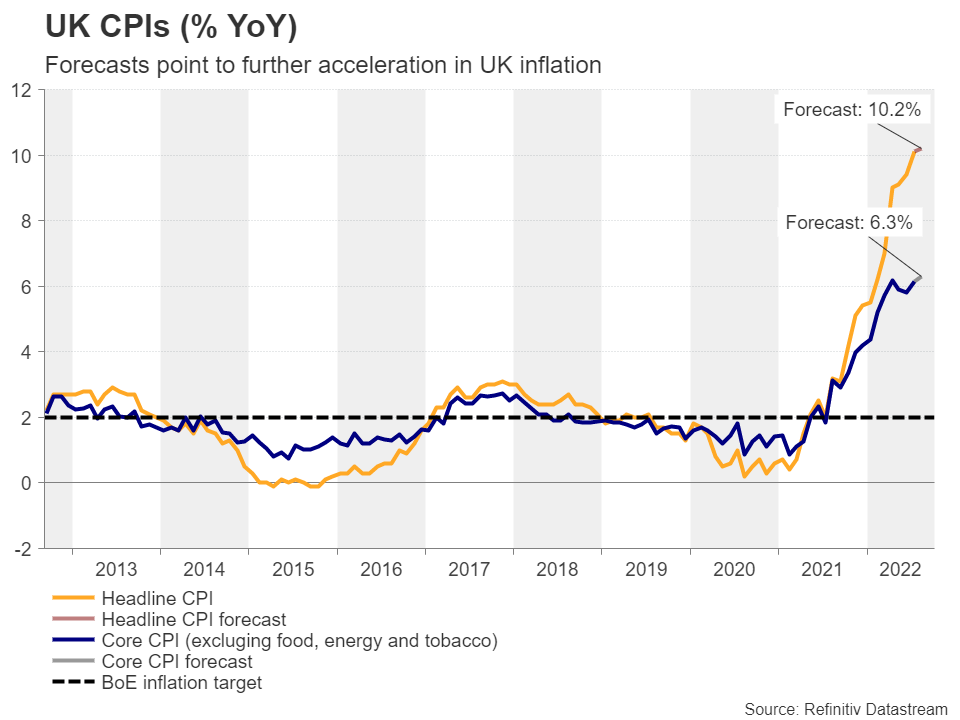 Another driver behind the sky-high UK inflation may have been the British pound itself. Although BoE officials have turned more aggressive at their latest gathering, they continue being very vocal in expressing their concerns with regards to the domestic economy, projecting that the UK economy will slip into recession by the end of this year and stay in such a state until the end of next year. Those fears combined with disappointing data have been translated into a tumbling pound. 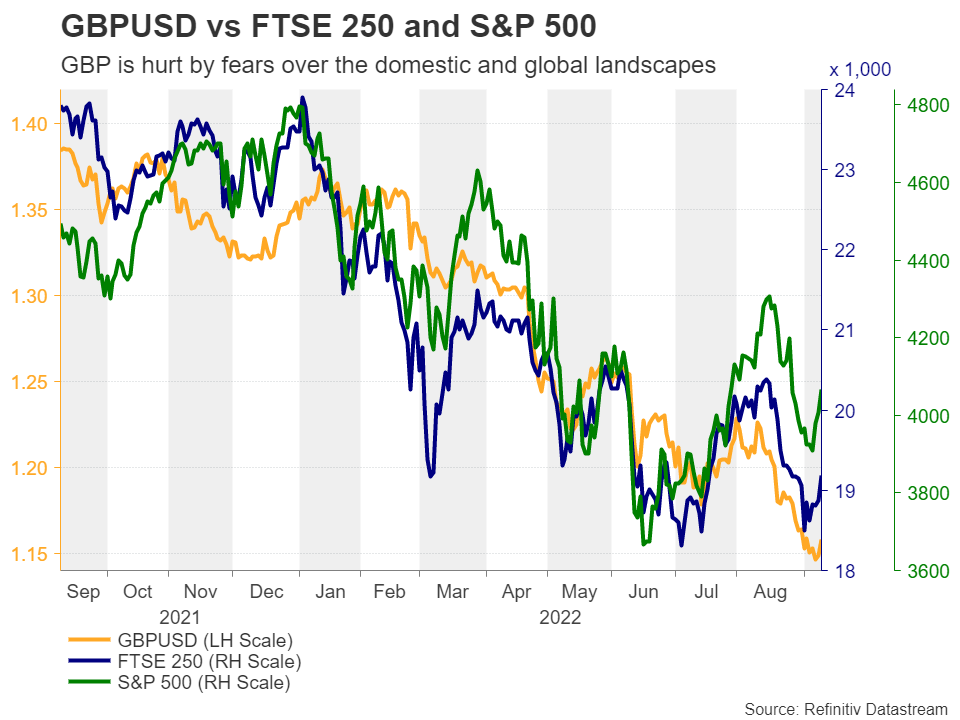 But the pound has not only fallen victim to the domestic economic performance, but also to fears regarding the global landscape. Due to the UK’s twin deficit, the currency has developed risk-linked characteristics, meaning that the tightening of monetary policy worldwide is adding extra pressure.

Will the BoE act more forcefully?

At its latest gathering, the BoE decided to strengthen its efforts to fight inflation, raising its benchmark rate by 50bps, and signaling willingness to act more forcefully if needed.

Therefore, accelerating inflation could add to speculation of a more aggressive BoE. Following Liz Truss’s plans that could prove to be inflationary, investors have raised the whole implied rate path, now expecting rates to peak at around 4.5% next September. As for next week’s meeting, they assign a 70% chance for a 75bps hike, with the remaining 30% pointing to 50bps. 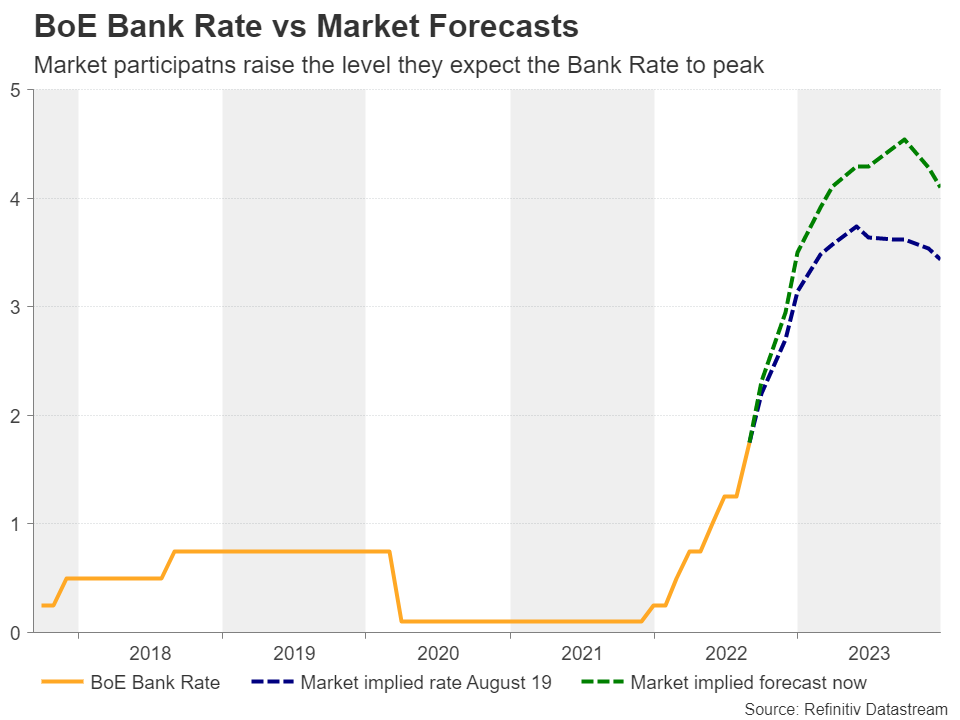 However, by raising the implied path so abruptly, investors may now be more subject to disappointment. Even if the BoE hikes by 75bps next week, it may proceed slower than expected thereafter. After all, just last week, several policymakers pushed against aggressive hike expectations, with MPC member Tenreyro noting that they should be going slowly when there is a lot of uncertainty.

Short-term gains for pound, but more pain in longer run

Accelerating inflation could encourage traders to add to their BoE hike bets and thereby allow the pound to extend its latest recovery. Pound/dollar could move back above the 1.1760 zone, marked by the inside swing low of July 14, and perhaps climb to the 1.2000 round figure.

However, the pair would still be trading below a downtrend line, with the price structure still being of lower lows and lower highs. The recession risks, a potentially widening budget deficit – due to Truss’s plan to fund her policies through public borrowing – and higher risk of the BoE disappointing, could result in another round of selling, and another test back down to the 1.1400 territory.

A break lower would take the pair into territories last tested in 1985 and may see scope for declines towards the psychological zone of 1.1000, the break of which could carry more bearish implications, perhaps allowing declines towards the lows of February and March of that year, at around 1.0550.

In order for a bullish reversal to start materializing, a recovery back above 1.2295 may be needed, accompanied by upbeat UK economic data. This would confirm a higher high on the daily cart and perhaps pave the way towards the high of May 31, at 1.2660. If that zone doesn’t hold either, its break could extend the rally towards the 1.2970 territory, marked by the inside swing low of April 13.