Week Ahead – Trouble spews for yen as Fed, BoE and SNB to hike, put spotlight on BoJ

A crucial week is coming up for the markets as no less than four central banks are scheduled to announce their latest monetary policy decisions. There is a strong possibility of a 75-basis-point rate hike from the Federal Reserve, Bank of England, as well as the Swiss National Bank. The Bank of Japan, though, is expected to buck the trend, leaving the yen at the mercy of its rivals. However, the flash PMI estimates for September will be important too amid ongoing worries about a recession.Fed meets: another big rate hike on the way

Many were hoping that the August CPI report would bring further relief on the inflation front, solidifying a downward trend in consumer price growth in the United States. But whilst the headline figure did indeed moderate for a second straight month, the drop wasn’t as big as had been expected and core inflation heated up on both the monthly and yearly measures.

That has left investors in no doubt that the Federal Reserve will pull the trigger on another three-quarter point hike on Wednesday when the Federal Open Market Committee concludes its two-day meeting. However, some traders have priced in about a 25% chance of a full percentage point increase. This is probably a bit too aggressive for the Fed, but it does raise the possibility of a relief rally on Wall Street should it ‘disappoint’. 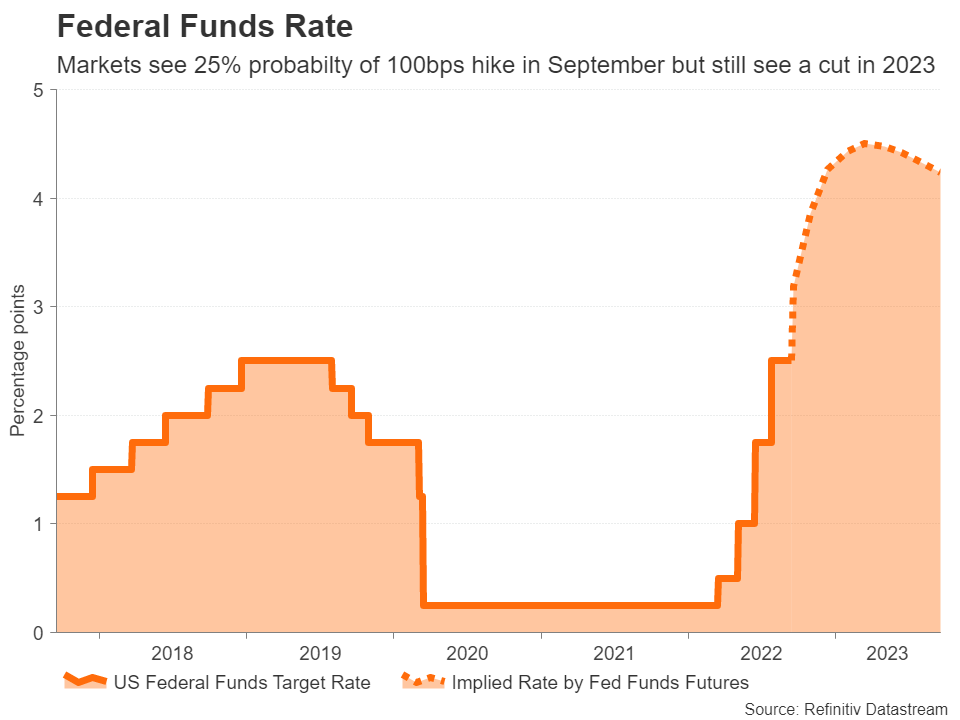 But even then, any spikes up in stocks and spike down in the dollar may not last long if Chair Jerome Powell does not rule out a further 75-bps rate rise at the next meeting in November. Investors will also be scrutinizing the latest dot plot chart to see if policymakers have revised up their projections of the terminal rate.

Excluding the FOMC decision, the US calendar is looking rather light, with only some housing data (building permits and housing starts on Tuesday, and existing home sales on Wednesday), as well as S&P Global’s flash PMIs on Friday potentially stirring the greenback.

The barrage of central bank decisions will start to gather pace a few hours after the Fed’s when the Bank of Japan announces the outcome of its meeting. Pressure is mounting on the BoJ to provide some hint of an end to years of ultra-accommodative monetary policy as the yen continues to get hammered in forex exchange markets due to widening yield spreads with other countries, most notably with the US.

Although inflation in Japan is on the rise, it is still comparatively low at just 2.6%. The core CPI rate targeted by the Bank stood slightly lower at 2.4% in July. Both are forecast to rise again when the August numbers are released on Tuesday. However, as far as the BoJ is concerned, it is yet to see any evidence of a sustained and broad-based build-up of price pressures, thus it is not in any hurry to tighten policy. 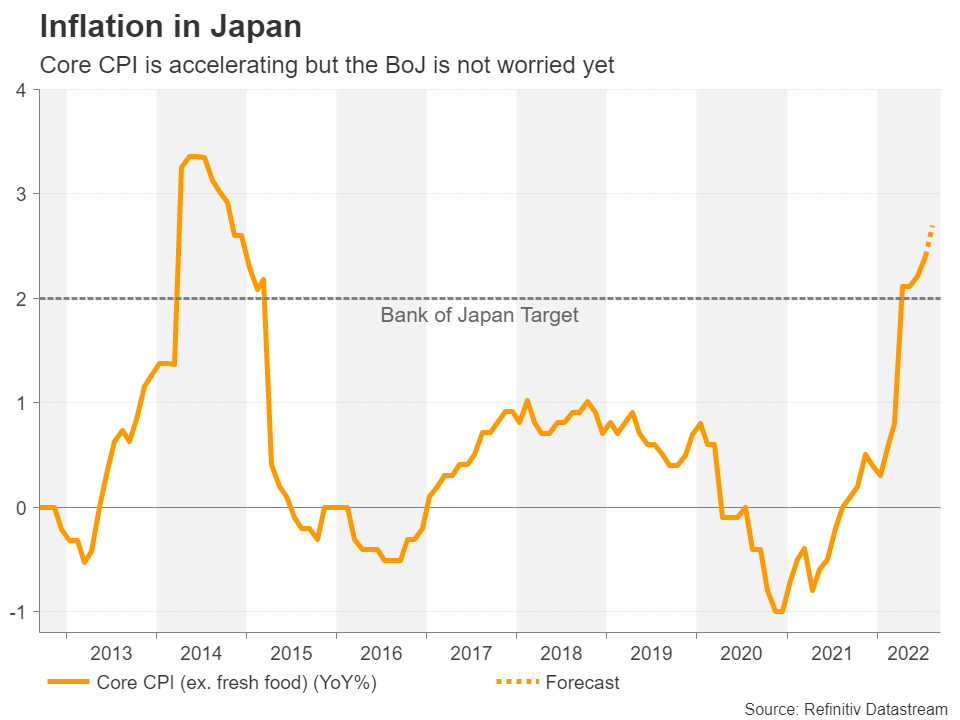 Nonetheless, with the Japanese government becoming more and more uncomfortable with the yen’s depreciation, Governor Kuroda will likely use stronger language to describe the yen’s latest slump, expressing concern about the “rapid” fall.

He may also flag an eventual exit out of stimulus but a change in the yield curve control policy is not on the cards next week. If both policy and guidance are kept unchanged, this would strongly imply that FX intervention is the Bank’s preferred option for putting a floor under the yen.

SNB: era of negative rates to come to an end

Next up after the BoJ on Thursday is the Swiss National Bank’s decision. The SNB avoided going down the BoJ route by delivering a shock 50-bps rate hike in June. Markets have fully priced in a 75-bps increase in September, with slightly less than even odds of a one percentage point move. Either way, the September decision will mark the end of negative interest rates in Switzerland. 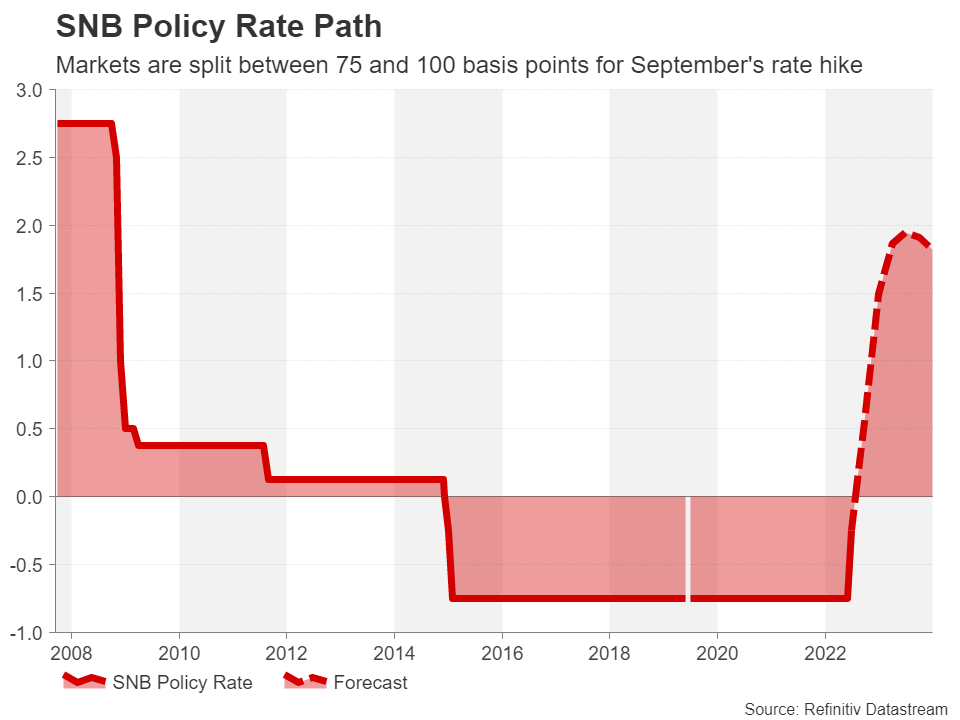 Inflation in the Alpine nation is at a somewhat manageable rate of 3.5% at the moment so the SNB may not see the urgency to get too aggressive just yet. If that turns out to be the case, the Swiss franc could come under pressure versus the US dollar, but probably less so against the likes of the euro.

Wrapping up the central bank bonanza on Thursday is the Bank of England. The week will get off to a sombre start in the UK as Monday has been declared a Bank Holiday to mark the funeral of the late Queen Elisabeth II. However, the economy looks set to come back under the limelight soon after that as new Chancellor Kwasi Kwarteng is expected to announce a mini-budget next Friday to provide further details on the government’s fiscal plans to support households and businesses through the energy crisis. 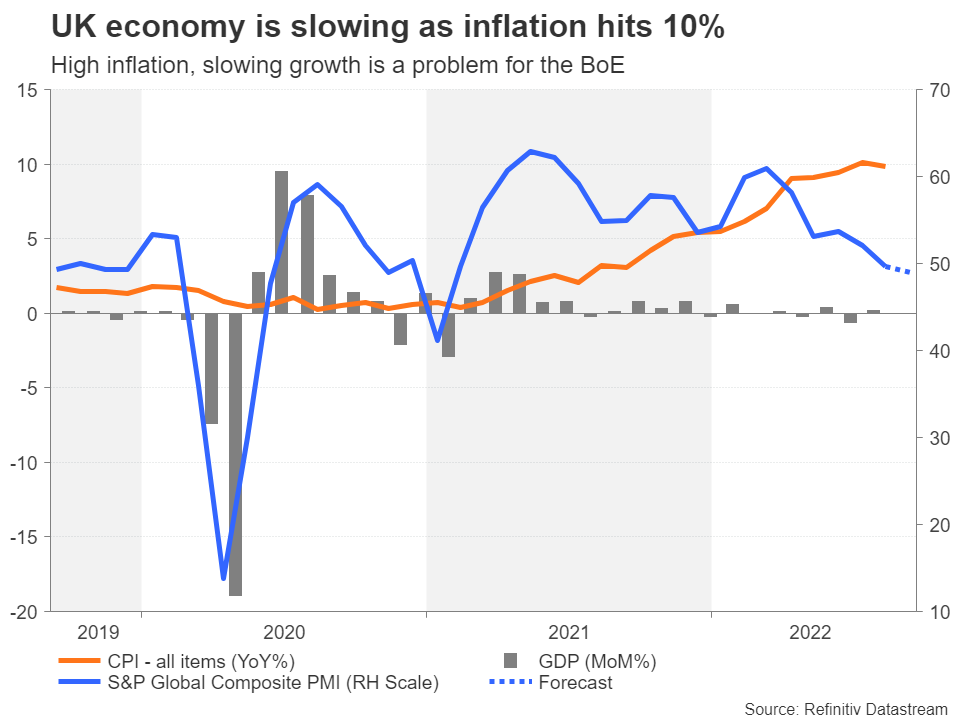 But before that, all eyes will be on the Bank of England and whether it will repeat August’s 50-bps hike or follow in the footsteps of the Fed and ECB and raise by 75 bps. Neither option is desirable for the Bank as the UK economy is losing steam fast. On the other hand, although inflation unexpectedly moderated slightly in August, it’s likely to jump again in the coming months and the BoE’s more cautious approach hasn’t succeeded in reining in inflationary pressures.

A hawkish surprise, either in the form of a 75-bps rise in the Bank Rate or by signalling the need of further tightening in the statement could provide some support to sterling in the face of renewed dollar strength.

However, the flash PMIs for August due on Friday and how good a job Kwarteng does in shoring up investor confidence in the government’s economic policies might be more vital for defending the pound.

Flash PMIs may spell more gloom for the euro

For the euro, the focal point will be Friday’s flash PMIs as the Eurozone economy likely slowed further in September. The composite PMI is projected to have declined below 50 for the third straight month to 48.1, indicating a full quarter of contracting economic activity. 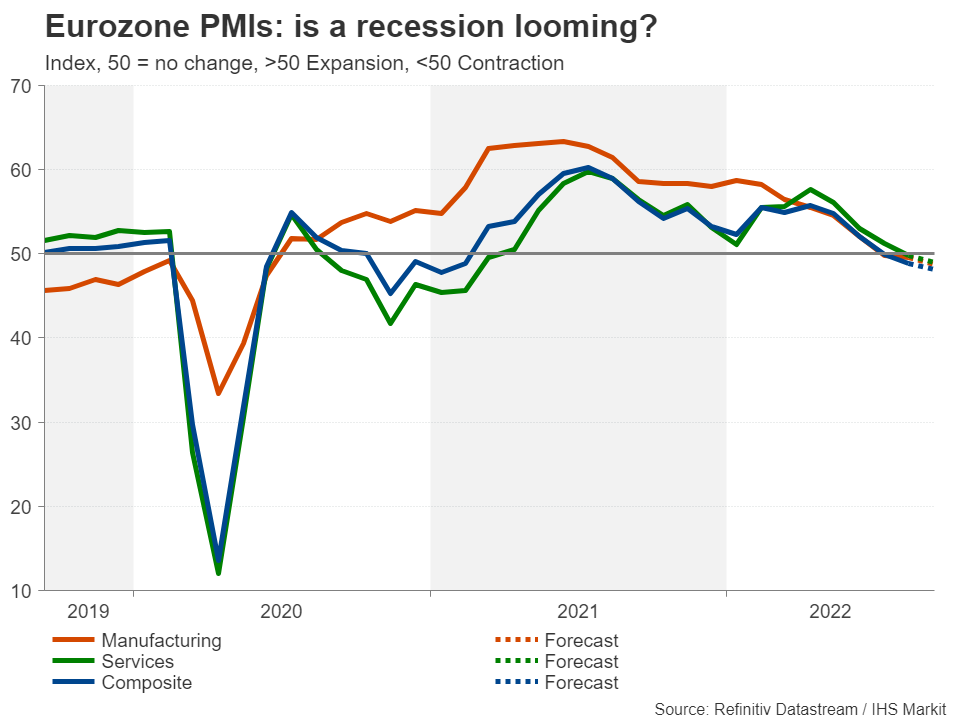 That probably won’t stop the European Central Bank from pressing ahead with further big rate hikes in the remaining meetings of 2022 and early next year. However, for investors to turn more bullish about the euro, they would first need to see light at the end of the energy crisis tunnel.

Although European gas futures have stabilized lately well off from the highs scaled at the end of August, uncertainty about supply during the winter months is expected to weigh on the euro for some time, offsetting any potential narrowing of yield differentials between the US and Eurozone.

Too early to slow down?

Elsewhere, Canada’s CPI data for August will attract the loonie’s attention on Tuesday. The Bank of Canada maintained its very hawkish stance at its last gathering despite boasting the highest policy rate amongst the major advanced economies. But some slowing down in the pace of tightening is likely after lifting borrowing costs by a massive 175 basis points in the last two meetings alone. Next week’s inflation figures should provide some clues as to whether the BoC will opt for 50- or 25-bps increments at its next meeting in October.

Markets are anticipating shallower rate increases by the Reserve Bank of Australia too going forward. The minutes of the RBA’s September meeting are due on Tuesday and may shed some light on how worried policymakers are about overtightening, while Friday’s flash PMI readings will also be watched by aussie traders.