The Australian dollar is in the midst of a rebound after last week plumbing almost two-year lows, but the path higher could get trickier as employment data is incoming and a federal election is days away. As the Reserve Bank of Australia embarks on its rate hike cycle, wage figures for the first quarter will be watched on Wednesday along with the April jobs report on Thursday, both due at 01:30 GMT. But political risks are on investors’ radar too as Australians could vote for a change in government when they head to the polls on May 21.RBA begins tightening cycle just as China shuts down

The commodity-linked aussie hasn’t been having a very good time lately. Although the currency came out of the Ukraine geopolitical storm not only unscathed but even managing to rally along with most commodities, the China slowdown scare has been less kind to the local dollar. China is Australia’s largest export market so the recent lockdowns in Shanghai and Beijing have prompted concern about both country’s growth prospects. Subsequently, the aussie plunged more than 10% from the April peak of $0.7661 to the May trough of $0.6827.

But like most other central banks, the RBA has a more pressing issue on its hands – high inflation. The consumer price index jumped to a two-decade high of 5.1% y/y in the first three months of the year. This probably influenced the Bank’s decision to raise the cash rate by 25 basis points instead of the expected 10 bps in May. The minutes of that meeting revealed that an even large increase was also on the table.

Labour market is key to pace of rate hikes

Expectations are now growing that the RBA will hike rates by 40 bps to 0.75% in June and this time round, it could be this week’s jobs numbers that sway the decision. The unemployment rate has fallen to 4% - a level not seen since early 2008. It’s expected to have dropped even lower in April to 3.9%. Employment is forecast to have risen by 30k, picking up pace from the prior month’s 17.9k gain. 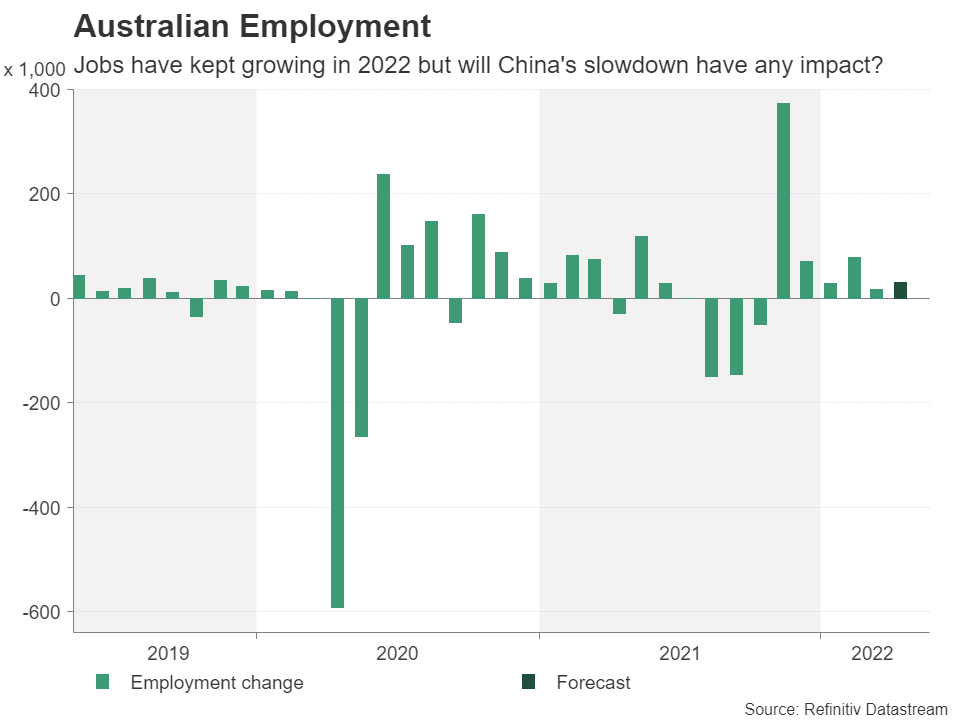 Just as important, if not more, for policymakers will be the wage price index. The RBA had repeatedly stressed in the past that it wants to see higher wage growth before beginning to tighten policy and it may now be getting what it wished for. The wage price index likely grew by 2.5% y/y in the first quarter, accelerating slightly from 2.3% in the prior quarter. 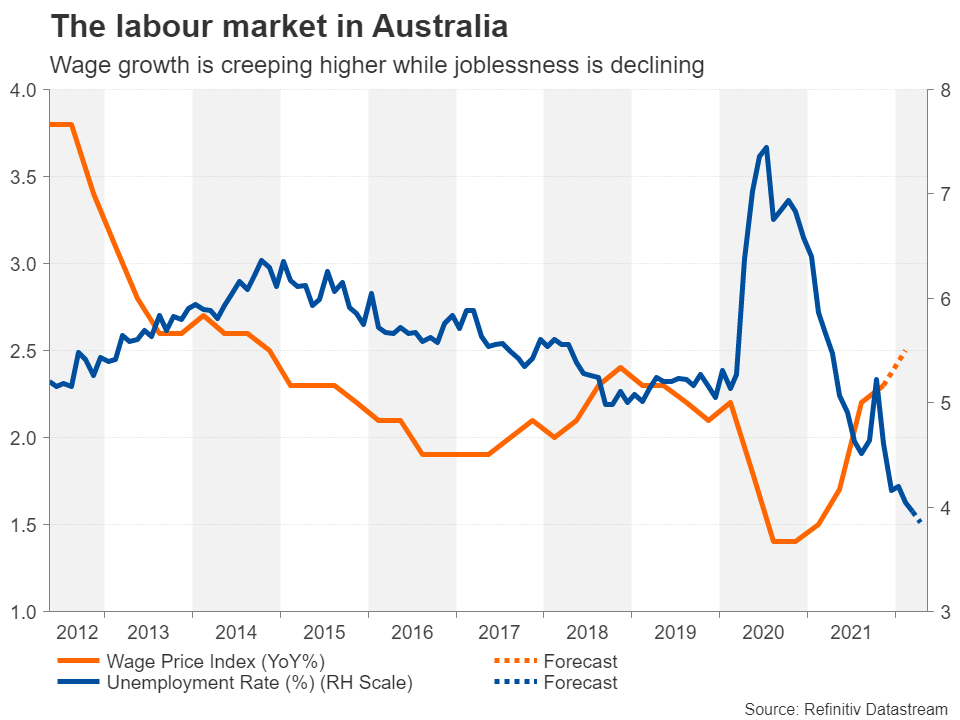 Can the aussie extend its rebound?

If the wage and employment figures reinforce the view of a tight labour market, the aussie could stretch its rebound towards the $0.7260 area that encapsulates both the May highs as well as the 200-day moving average.

However, there are still several downside risks that may pull the aussie back down again. If the recovery falters, the aussie could surpass May’s 23-month low to breach the $0.68 level and tumble towards the 161.8% Fibonacci extension of the January-April uptrend at $0.6536.

The main threat to the Australian economy right now is if there’s a fresh virus outbreak in China that sparks a new round of lockdown restrictions just as existing ones are about to be eased. But another potential risk is the federal election on Saturday.

The ruling coalition between the Liberal and National parties led by Prime Minister Scott Morrison is lagging behind the opposition Labor Party in the polls. Although the gap has started to narrow in recent days and in some polls the coalition has regained the lead, it’s unclear if Morrison will be able to turn his fortunes around on time.

Coalition is struggling in the polls

Having enjoyed a boost in popularity from its handling of the pandemic, the government has come under pressure to do more to alleviate the burden on households from the surge in living costs. The timing of the RBA’s first post-pandemic rate hike hasn’t done it any favours either as borrowing costs are going up too.

The Labor party is proposing a rise in the minimum wage as a way to minimise the pain for households, something the coalition was initially opposed to before backtracking after coming under criticism for its stance.

Another concern for voters is climate change as the increased frequency of floods and fires in recent years has made this a hot topic during the elections. But the main parties’ policies fall short of cutting emissions as a priority, although Labor’s targets are slightly tougher.

No standouts in economic policies

But as far as markets are concerned, economic policies are what matter and there isn’t a great deal of difference separating Labor from the Liberal-National coalition. This is especially true after Labor said they would not repeal the tax cuts introduced by the current government.

If the coalition does have an edge over the economy and business policies, it might be offset by Labor’s less hostile stance towards China. The two countries’ relations have featured heavily in the election campaign as Australians are wary of China’s growing influence in the Asia-Pacific region. Morrison has put trade links with China on the line several times during his tenure. For example, he led the global calls for the origins of Covid-19 to be investigated. China responded by banning the import of Australian beef, wine and other products.

Is Australia headed for a hung parliament?

Hence, market reaction to the election outcome will likely be limited, with a win for the incumbent prime minister boosting the aussie and domestic stocks only modestly. The worst case scenario for investors, however, is if neither party is able to achieve a majority and the election results in a hung parliament.

This often creates some uncertainty while new political alliances are hashed out. If that were to fail, a minority government would be the only way forward, which might bring about a period of instability. So traders will probably be only slightly bothered if the coalition is voted out but Labor wins a clear majority, while a hung parliament could weigh on the aussie more significantly.