Canadian CPI inflation figures for May will make headlines on Wednesday at 12:30 GMT as investors look for clues to justify a potential Fed-style triple rate hike from the Bank of Canada next month. Given the unforeseen inflation spikes elsewhere, an upbeat report in Canada would not be surprising, likely making a super-sized rate increase imminent as the economy is already running hot.  Will the BoC follow in the Fed's footsteps?

During June’s policy meeting, the Bank of Canada (BoC) hiked its benchmark interest rate by a half percentage point, underlining its intention to act even more forcefully if that’s what it’s going to take to cool inflation. Overnight swaps are now suggesting a probability of 67% for a Fed-like episode of a 75 bps rate hike in July, and despite growing concerns of an economic contraction, BoC chief Tiff Macklem did not play down the case a few weeks ago. Instead, he argued that surging borrowing costs are much needed to cool the housing market while setting a goal for a soft, manageable landing, although the finance minister advised to not take the latter as granted.

Therefore, May’s inflation report will be the next test for rate expectations on Wednesday. Following the sudden inflation pickup in the US, traders are forecasting a spike to 7.5% y/y from 6.8% previously in Canada - the highest since 1983. If estimates are right or in an extreme case, they are underestimating the inflation risk, a rate hike of a bigger magnitude in July might become a done deal. 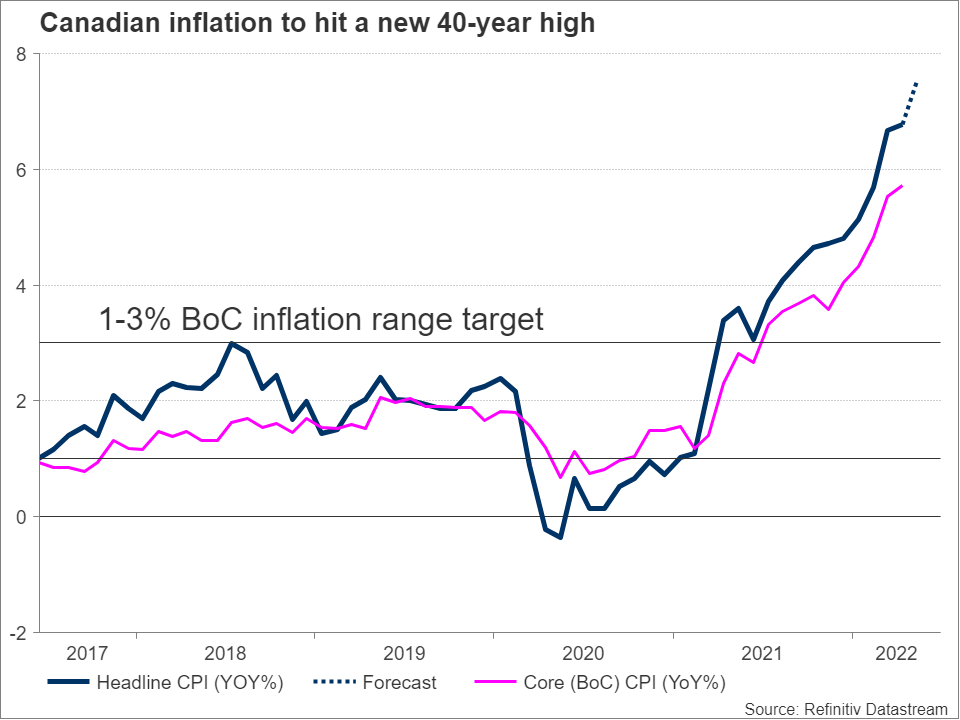 The economy is running hot

Although households are indebted and therefore relatively sensitive to any rate increases, the Canadian economy may have the capacity to handle faster monetary tightening. The labor market is extremely tight, delivering its lowest unemployment rate on record in May. On top of that, Statistics Canada revealed that an all-time high of more than a million job vacancies were still hard to fill as of March, flagging a potential pickup in wage growth, which could consequently result in another inflation wave, and therefore toughen the BoC’s efforts to balance price growth.

Retail sales for April could shed some light on how resilient consumption is on Tuesday at 12:30 GMT. Total retail sales, which stagnated in March, are projected to gear up by 0.8% m/m, whereas the core measure is expected to diminish significantly from 2.4% to 0.6%. Even if recession fears come and go these days, the latter may do little to cancel a triple quarter rate increase next month if price growth marks a new multi-decade high. Besides, oil is an important export product for Canada and global galloping oil prices may bode well for the economy in the foreseeable future. 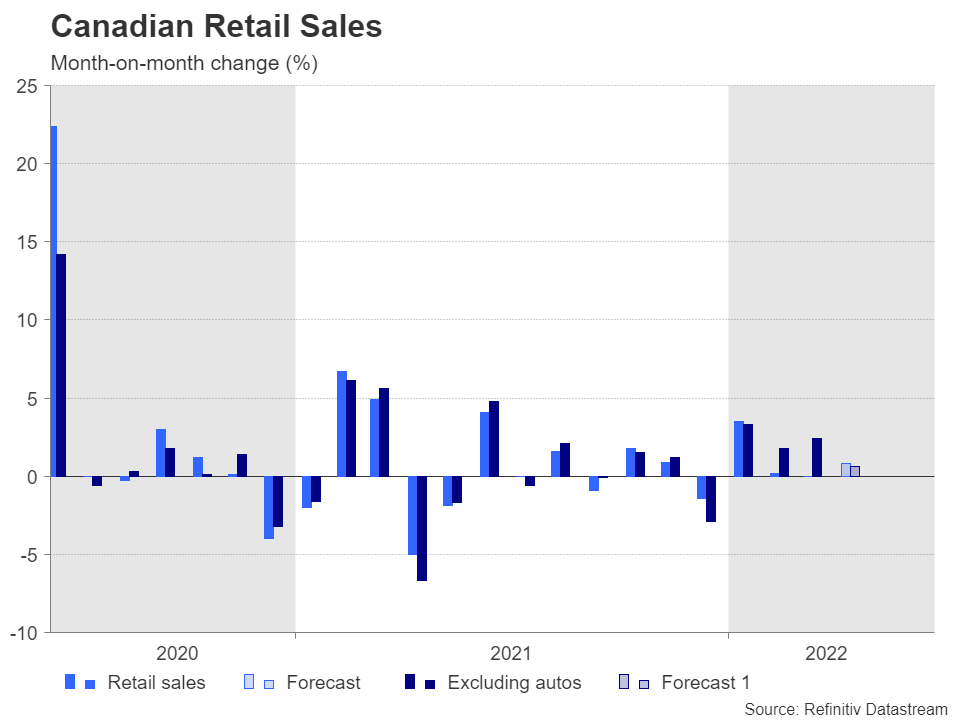 If the headline CPI rate outpaces forecasts, the loonie may attempt to heal its wounds against the US dollar. In this case, dollar/loonie may reverse southwards to seek immediate support around 1.2950, while lower, the pair may retest the 1.2859 region ahead of the 1.2777 mark. However, with forecasts positioned wide off April’s readings, a milder CPI pickup cannot be ruled out, though that might barely pressure the commodity-linked currency.

The question that arises at this point is how far the loonie’s recovery could go. The BoC and the Fed will both likely drive their borrowing costs up to 2.25% by September and should the central banks continue to move in lockstep for the rest of the year, eliminating monetary divergence, the loonie might hardly stage any meaningful rally, unless oil prices press sustainably higher. On the other hand, the greenback could still find support from safe haven flows in case the global outlook deteriorates.

In the bearish scenario, where Canadian inflation fizzles out and retail sales portray softening domestic demand, dollar/loonie may rechallenge the ceiling at 1.3026 – 1.3075. A successful close higher could stretch towards the 1.3230 barrier.