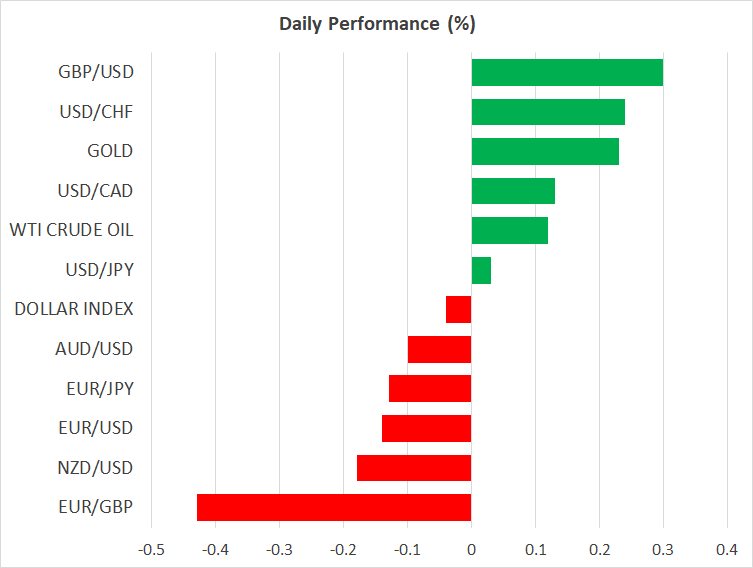 The Bank of England (BoE) unanimously voted to keep its policy unchanged today and struck a fairly optimistic tone. Even though it acknowledged the various risks that still hover over the UK economy, it also highlighted that ‘spending has recovered significantly since April’, and raised quite substantially its GDP forecasts for this year.

The takeaway for markets was that policymakers raised questions about the effectiveness of negative interest rates, which has been widely speculated as the BoE’s next move. And with the new forecasts implying inflation will be at almost 2% next year, there’s seemingly no rush to add more stimulus. That pushed sterling higher, as traders trimmed bets for an adoption of negative rates over the coming year.

Overall, the pound has staged a remarkable rally lately, capitalizing mostly on a weaker dollar and stronger risk appetite, as well as improving domestic data. But unless the dollar continues to collapse, it’s difficult to envision this rally stretching much further. Because UK inflation expectations remain much higher than those for the US or the Eurozone, Britain now has the lowest real interest rates in developed markets by far, which is anathema for a currency over time. Combined with the unsettled Brexit saga, this may ultimately come back to haunt sterling.

In the broader market, optimism remains the driving force. Stock markets continue to march higher, with the S&P 500 now just 2% away from its record high amid growing expectations that the new stimulus package may be closer to the $3 trillion the Democrats are pushing for, rather than the $1 trillion the Republicans want.

In a nutshell, the Democrats – led by House speaker Nancy Pelosi – are playing hardball, sensing that they have far more negotiating leverage. Pelosi is apparently not moving one inch on her ‘red lines’, such as the $600/week in extra unemployment benefits and large transfers to local governments, reckoning that any delay in this agreement will hurt the Republicans far more in the upcoming elections.

Judging by the price action lately, markets believe she is right, and are thus pricing in a larger agreement in size and scope, even if it is delayed a few days or weeks.

The dollar has been the main casualty of the ‘risk on’ mood that has engulfed markets, with euro/dollar testing the $1.19 zone again on Thursday. Yet, the pair found fresh sell orders and was rejected, which suggests that the dollar is ‘down but not out’.

Whether this technical area is violated will be the clearest signal for what comes next in the FX arena: will the dollar’s downfall resume or has it gone too far already? The catalyst may be tomorrow’s payrolls report. It’s a tough one to predict and there’s massive dispersion among forecasters, but most signs point to a disappointment relative to the rosy 1.6 million consensus.

As for today, besides any updates in the Congressional negotiations, investors will keep one eye on the weekly US jobless claims and on some remarks by the Fed’s Kaplan (14:00 GMT) and Brainard (16:00 GMT).