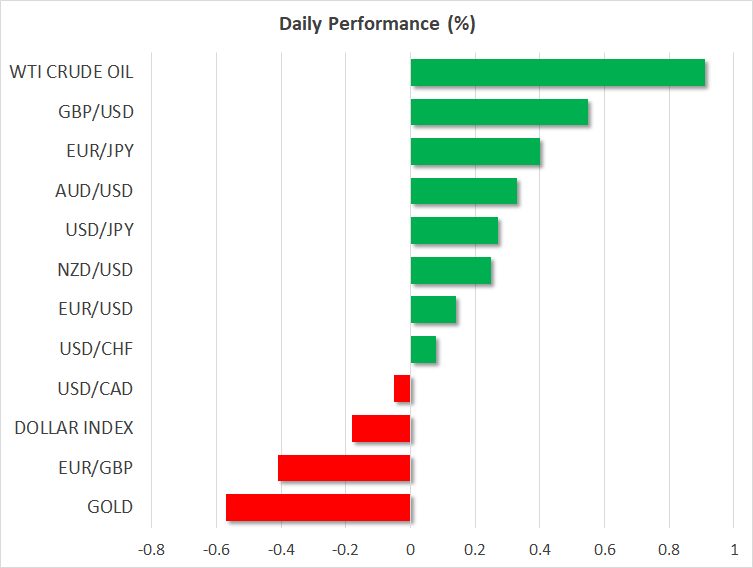 UK Prime Minister Boris Johnson suffered a humiliating defeat in Parliament on Tuesday after 21 of his own MPs voted in favour of a cross-party bill that paves the way for a vote later today on whether the government should seek a three-month extension to the Brexit date. Earlier in the day, the prime minister was dealt another blow when it lost its parliamentary majority of one after a Conservative MP defected to the Liberal Democrats.

Soon after the defeat, Johnson confirmed that he will seek to hold a snap election on October 15. However, it’s looking unlikely that he will achieve the two-thirds majority he needs to trigger an early election as the Labour party, which has been calling for new elections for months now, have signalled they will not back the motion unless the government agrees to rule out a no-deal Brexit.

At the very least, the prime minister will have to promise to fix the date of the election well in advance of October 31 so as to remove the possibility of shifting the date to after the Brexit deadline once the bill is passed.

The renewed push to prevent a chaotic exit from the EU lifted the battered pound yesterday, which had earlier plunged to a three-year low of $1.1957. Cable extended its gains in Asian trading today to climb back above $1.21 as it became increasingly apparent that Boris Johnson will not be able to get his way in Parliament. However, the worsening uncertainty and the prospect of the UK heading towards a constitutional crisis kept the pound’s advances in check.

Further aiding the pound’s recovery was a drop in the US dollar, which came under pressure on Tuesday from a surprise contraction in manufacturing activity according to the Institute for Supply Management’s (ISM) purchasing managers’ index (PMI). The ISM gauge slipped to 49.1 in August from the prior 51.2 – the first contraction since 2016.

The data fuelled fears that the US economy is slowing fast and could be headed for a recession, driving Treasury yields to fresh multi-year lows and boosting bets of more aggressive policy easing by the Federal Reserve.

St. Louis Fed President James Bullard appeared to agree with the markets’ view, calling for a 50 basis points cut at the September meeting in two weeks’ time in an interview yesterday. However, he may face some resistance as Boston Fed President Eric Rosengren reiterated his scepticism about the need for rate cuts.

The dollar fell to 105.82 yen before rebounding above the 106 level but its declines were more significant against other majors. The euro reversed from a two-year low of $1.0924 to head back towards the $1.10 handle, while the risk-sensitive aussie and kiwi also found themselves on the front foot versus the US currency.

With both the Australian and New Zealand central banks expected to make additional rate cuts over the coming months, the reprieve for the local dollars is likely to be only a temporary one.

However, the euro’s upside correction could have more room to run as recent remarks from some ECB policymakers suggest a resumption of the bank’s quantitative easing program is not a done deal and investors could be setting themselves up for disappointment by anticipating a big stimulus package at next week’s policy meeting.

Bank of Canada decision coming up

Another currency halting its slide against the greenback is the Canadian dollar, which yesterday slumped to 2½-month lows on expectations that the Bank of Canada will switch to an easing bias at its meeting today. The BoC has so far refrained from flagging a rate cut but a potential slowdown in the United States could make it difficult for it to stay neutral for long.

The BoC will announce its decision at 14:00 GMT and any dovish shift is likely to pressure the loonie, cutting its rebound short.

The greenback will also remain in the spotlight as more Fed officials will be speaking, including Bullard at 16:30 GMT and Evans at 19:15 GMT, and the Fed will publish its latest assessment of the US economy in its Beige Book.