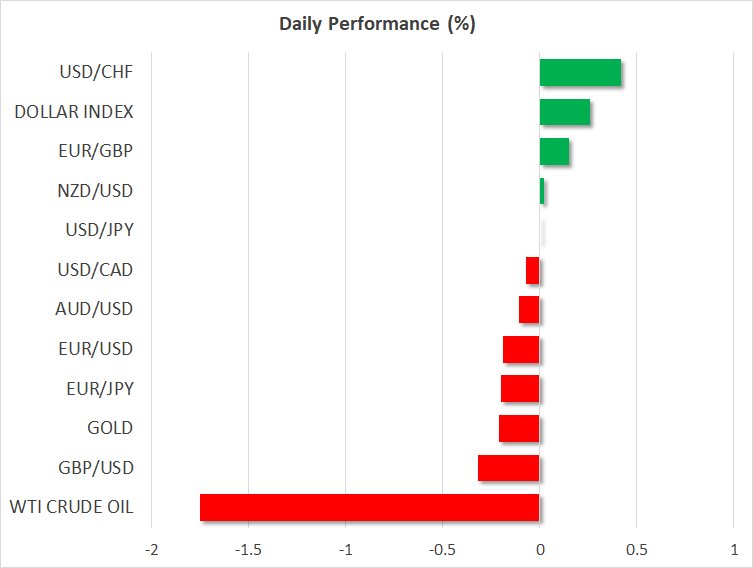 Asian stocks were under pressure on Wednesday as US President Donald Trump gave his clearest signal yet that his administration is planning a response to China’s tightening of its grip on Hong Kong. In a White House press briefing on Tuesday, Trump indicated that there will be an announcement before the end of the week as US anger at China continues to mount over a range of issues, with Hong Kong being the latest that could trigger a new round of sanctions.

Yet the risk of a major escalation in tensions between the world’s two most powerful countries could only dampen sentiment in Asia, with Chinese and Hong Kong shares leading the way down. But the mood elsewhere remained buoyant, including in Tokyo, where the Nikkei 225 soared to a near 3-month high at the close, boosted by the announcement of a $1.1 trillion virus stimulus package by the Japanese government.

Shares in Europe also extended yesterday’s gains at the open and US stock futures suggest it will be second-time lucky for the S&P 500 to close above the key psychological 3,000 level, after failing to do so yesterday.

With equity markets swamped by a flood of liquidity and policymakers not ready to turn off the stimulus taps just yet, it seems that investors are not so easily frightened by rising geopolitical tensions these days. However, while the abundance of stimulus may provide a nice cushion to land on, the market’s behaviour raises the prospect of a sharper correction down the line should the Hong Kong row spark a much deeper crisis between the United States and China.

The mood was much more cautious, however, in FX markets, with safe-haven currencies rising broadly against their peers. The dollar index edged up 0.25%, though the greenback was flat against the yen and down versus the loonie.

The Canadian dollar finally broke through a key resistance yesterday, surging below the C$1.38 level as the reopening of economies around the world lifted sentiment around the growth outlook. The loonie’s strong gains come despite the Bank of Canada Governor hinting at more stimulus on Tuesday and the oil rally losing some steam in the past week.

The Australian dollar also held firm, slipping very slightly as the risk-on mood eased a little today. The aussie’s emerging bullish structure is not too dissimilar to that taking shape in major stock indices as investors focus on the virus recovery story, which is being underpinned by governments scaling back their lockdown restrictions and some progress on the vaccine front.

Unusually, gold ticked lower on Wednesday, shrugging off the growing threat of US sanctions on China, even though the precious metal has been more accurately tracking virus and geopolitical risks than equities have during the pandemic.

The euro also headed lower, unable to build on yesterday’s impressive performance amid doubts about whether the French-German proposal for a 500-billion-euro virus recovery package would get the backing of other EU members. Four member states, including Sweden and the Netherlands, oppose any plan that would involve debt mutualization and have put forward their own proposal.

The European Commission is due to unveil its idea on a rescue fund later today and all in all, it’s looking like another case of long-drawn-out negotiations followed by a ‘too little, too late’ plan. In the meantime, expectations are rising that the European Central Bank will beef up its pandemic emergency purchase program when it meets next week.