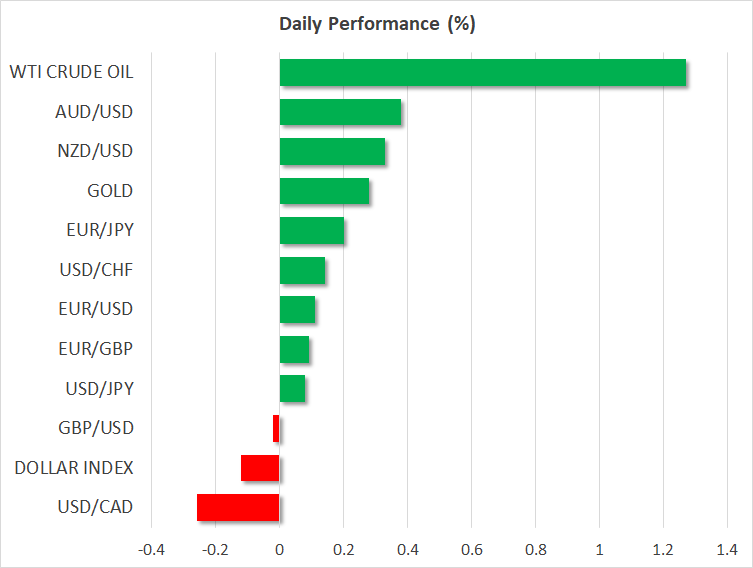 Markets started the week on a positive note on Monday on hopes that the talks between US President Trump and Chinese President Xi on the sidelines of the G20 summit on June 28-29 will lead to a resumption of trade negotiations between the two countries that have been on hold since early May. Shares in Asia were mostly in the green, while US and European stock futures were pointing to modest gains for Monday. The S&P 500, which surged to record highs last week after the Fed opened the door to rate cuts, was looking to advance 0.3% at the US open.

Earlier today, China’s Vice Commerce Minister, Wang Shouwen, urged both sides to compromise. But a major breakthrough is unlikely as only on Friday the US Commerce Department added several Chinese companies to the ‘entity list’ that restricts them from buying American technology without the approval of the US government. In response, China added US firm FedEx to its own ‘unreliable entities list’, raising the prospect of further tit-for-tat measures.

Tensions continue to brew between US and Iran

President Trump may have called off a military strike on Iran last week but tensions in the region remain heightened as Washington plans to announce new sanctions on the country on Monday in response to the recent attacks on oil tankers. Although an imminent conflict may have been averted for now, future military action remains a strong possibility as Trump has threatened “obliteration like you’ve never seen before” if Iran does not return to the negotiating table.

The recent escalation has bolstered oil prices, with both WTI and Brent crude surging to more than 3-week highs. Further supporting oil over the past week is the improving demand picture on the back of the global shift by major central banks to cut interest rates.

Similarly, gold has also received a double boost from the rising geopolitical tensions and falling sovereign bond yields, especially in the US, that lifted the precious metal to six-year highs on Friday. Gold was able to hold on to the $1400 an ounce level today, trading just above the handle.

The increased geopolitical risks and a more dovish Fed have not been good news for the US dollar, however, as the greenback slips to 3-month lows against a basket of currencies. Investors continue to heavily price a rate cut by the Federal Reserve at its next meeting in July and PCE inflation data due later in the week should provide a further clue about the Fed’s intentions in the coming weeks.

The dollar was trading slightly above Friday’s 5½-month low of 107.04 yen, while the euro scaled 3-month highs, touching $1.1389. The euro got a boost on Friday from better-than-expect Eurozone PMIs for June even as the European Central Bank signals that ‘additional stimulus’ may be needed as price pressures remain muted. This puts the focus on the flash June inflation readings due later in the week.

The pound also benefited from the fading dollar, climbing above the $1.27 level. Though the prospect of Boris Johnson likely becoming the next prime minister of the United Kingdom kept sterling’s gains in check.

The Australian and New Zealand dollars were on the front foot too despite strong expectations that both the RBA and RBNZ will cut rates further over the coming months. The Reserve Bank of New Zealand holds its next meeting on Wednesday and is anticipated to hold rates unchanged but could signal more cuts. There were mixed messages, however, from RBA Governor Philip Lowe, who today appeared to question the effectiveness of monetary easing having hinted at the need for more rate cuts only last week.