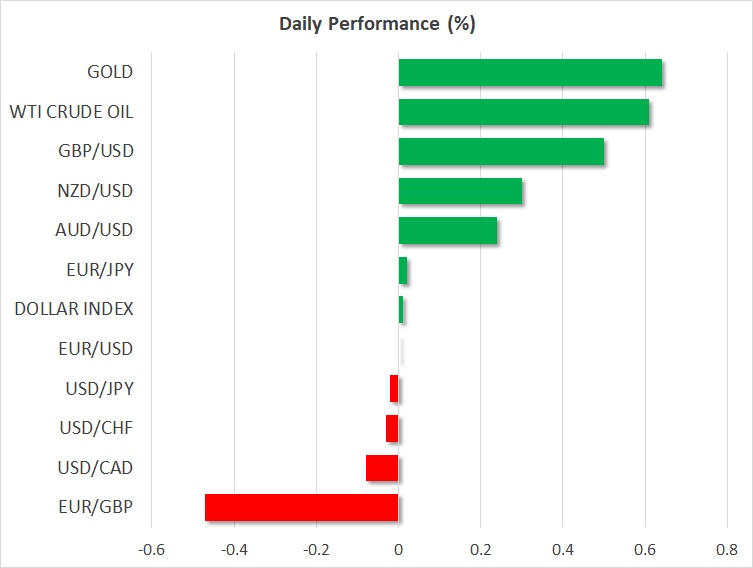 Hopes for pre-election stimulus deal not dead yet

Fresh talks in Washington between the White House and the Democrats on a new virus relief bill kept alive hopes that a deal could be made before the presidential election in two weeks’ time. However, for a bill to realistically be passed by Congress before Election Day, the two sides would have to reach a deal by end-of day Tuesday and that is exactly the deadline House Speaker Nancy Pelosi has set.

But the tight deadline is not the only challenge for negotiators. Treasury Secretary Steven Mnuchin – the White House’s lead negotiator who has played a crucial role in bridging the gap between the two sides – will be away in the Middle East until Tuesday and so it may be more difficult to contain the deficit hawks within the Republican party without his presence.

Nevertheless, this is an encouraging sign for the markets and add to that the fact that Joe Biden has widened his lead over incumbent President Trump in the opinion polls despite the recent bad publicity surrounding his son, investors are more hopeful that another big fiscal package will arrive one way or another.

The optimism pushed US equity futures higher by almost 1% at the start of European trading on Monday, with shares in London, Frankfurt and Paris also posting solid gains.

However, Asian markets were mixed as Chinese stocks fell following a slight miss in the country’s third quarter GDP reading. China’s economy grew by a less-than-expected 4.9% year-on-year in Q3, but the figure was viewed as quite respectable in the broader markets as traders elsewhere focused on the pick-up in retail sales and industrial output in September.

The data confirming that China’s recovery remains on track comes just as COVID-19 cases are escalating in much of the rest of the world, particularly in Europe, with growing talk of a double-dip recession.

Positive developments around a vaccine may be one reason why investors have yet to press the panic button; the prospect of another large dose of US fiscal stimulus is another. The latest buzz for a vaccine comes after Pfizer said over the weekend that its vaccine has already gone into production, ready to be rolled off as early as late November should it get the necessary approvals.

Dollar slides as pound and kiwi perk up, euro struggles to keep up

The spate of promising headlines helped ease some of the gloom that had been building up over the past week, which had driven the US dollar to two-week highs against a basket of currencies. The greenback was slightly softer today and the Japanese yen was also on the backfoot amid the improved risk sentiment.

The pound led the gainers following last week’s roller-coaster ride for the British currency and was flirting with the $1.30 level again. Sterling came under selling pressure on Friday after Boris Johnson told his country to prepare for a no-deal Brexit as talks with the EU on a post-Brexit trade deal broke down. Angered by the EU leaders’ refusal to intensify talks, Johnson warned that there will be no further negotiations unless there was a “fundamental change of approach” by the EU.

However, most investors see the latest Brexit drama as just more posturing as neither side has yet to completely walk away from the negotiating table and reports today that the UK may be willing to ditch its plans to rewrite parts of the Withdrawal Agreement as a potential compromise to the EU boosted this view.

The New Zealand dollar was another strong performer on Tuesday, basking in the glow of the Prime Minister Jacinda Ardern and her Labour party’s landslide election victory over the weekend.

But the euro was somewhat muted, rising only modestly amid an increasing number of dovish remarks from European Central Bank policymakers lately. President Christine Lagarde became the latest to add her concerns about the Eurozone recovery as virus restrictions on the continent continue to rise. Speaking on Sunday, Lagarde warned “the recovery remains uncertain, uneven and incomplete”, adding to speculation as to what the ECB may do at its meeting next week.