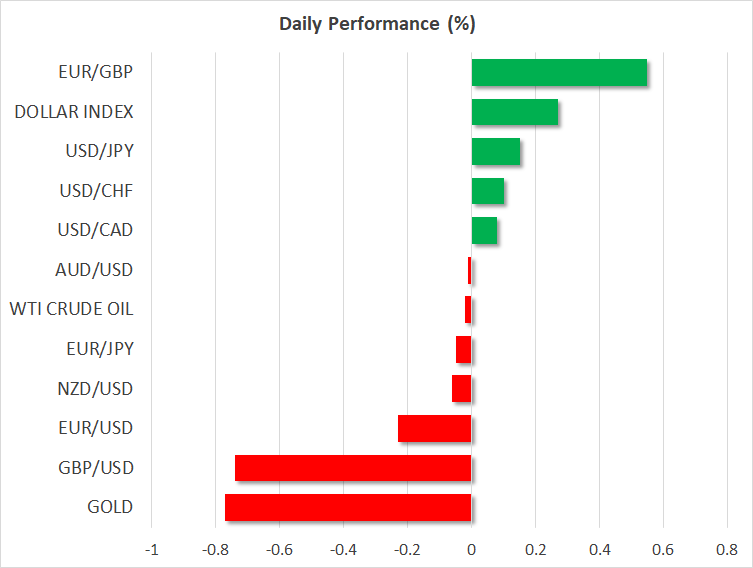 The coronavirus theme continues to torment financial markets, with Chinese stocks closing lower by almost 8% today, on their first day back from holidays. The losses would have been even greater had the People’s Bank of China not cut rates this morning and injected vast amounts of liquidity into the system to support the uncertainty-hit economy.

Chinese markets seem to be playing catch-up, as risk aversion was the name of the game worldwide on Friday. US stocks fell by nearly 2%, the defensive Japanese yen outperformed in the FX sphere, while the commodity-linked Australian dollar collapsed, even against a US dollar that was weak itself. There was nothing particularly new to justify all this, so the defensive rotation was likely owed to traders reducing their risk exposure before the weekend, in fear of the headlines that might greet them on Monday.

Outside of China though, the rest of the market seems to have taken a chill pill today, with most of these moves reversing, albeit only moderately. The yen has given up a small part of its gains, the aussie is attempting a recovery – but remains near 10-year lows – and futures are pointing to a ~0.5% higher open on Wall Street today.

Recession fears are back, dollar feels the heat

What is most striking is that the bond market is saying a US recession is back on the radar, perhaps due to the spillover effects a sharp slowdown in China might have on the sales of US multinationals and global sentiment. The part of the yield curve the Fed looks most closely at – the difference between 3-month and 10-year yields – has inverted, which means investors expect the economy to get worse and thus anticipate the Fed to cut rates and keep them low.

Indeed, Fed funds futures pricing suggests that two quarter-point rate cuts are virtually fully priced in by December, with the first discounted by July. This also explains why the greenback fell sharply on Friday, as the drop in US yields eroded much of the dollar’s interest rate advantage and fears of a US recession limited its haven appeal.

Admittedly though, this doesn’t look like the ‘beginning of the end’ for the world’s reserve currency. If the market fully pricing in two Fed rate cuts this year was only capable of sending the greenback down modestly, then we might need to see full-blown recession hysteria hit before the US currency truly moves lower, and that doesn’t look likely for now.

If anything, the current pessimism may even be setting the dollar up for a major surge down the road. If the fallout from the virus is ultimately not severe enough to truly hurt the US economy, then rate-cut expectations may be quickly priced out, restoring the dollar’s carry advantage.

In the UK, PM Boris Johnson will deliver a speech today and will indicate that he’s prepared to walk away from the Brexit negotiations if the EU insists on close alignment of rules and standards.

The pound is therefore on the retreat, and the overall tide for the currency may be turning. Political risk will likely return with a vengeance soon, as Boris starts threatening a no-deal exit again. And while the Bank of England held off from cutting rates, that may change if economic data don’t stage a spectacular rebound soon.

US Democratic primary begins, will stocks ‘feel the Bern’?

In America, the Democratic primary nomination process kicks off today. Iowa will be the first state to vote on who should represent the Democratic party against Donald Trump at the November presidential election, and while markets usually don’t react much to such events, this time may be different.

The frontrunner in Iowa is Senator Bernie Sanders, who advocates for higher business taxes to fund welfare programs. While his policies may be an effective antidote to low wage growth in the longer run, the short-term effect on stocks would definitely be negative, especially with valuations so stretched.

On the data front, the ISM manufacturing PMI today might be crucial for the dollar and equities, given the resurgent fears of a recession.

Elsewhere, the Reserve Bank of Australia concludes its policy meeting early on Tuesday.