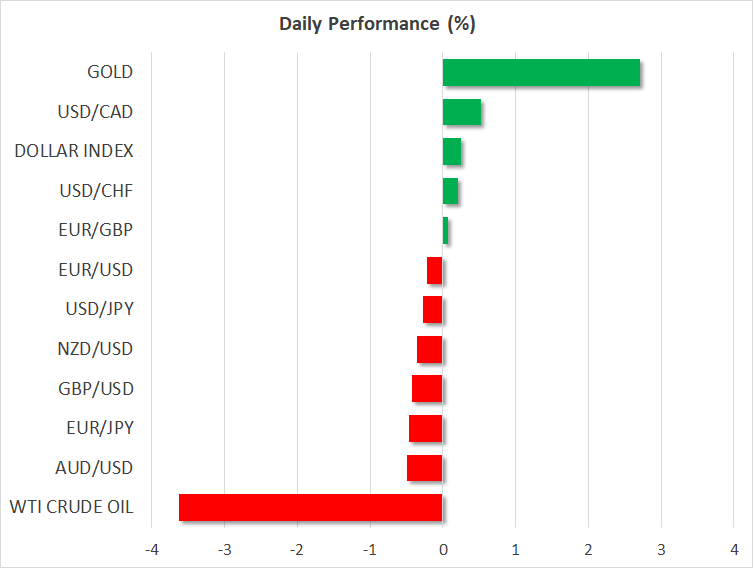 Concerns mount about virus impact after spike in global cases

The number of confirmed coronavirus cases outside of China continued to multiply over the weekend, sending shivers across financial markets as investors were forced to reassess their view that the impact of the outbreak will likely be short-lived. While the number of new infections in mainland China appears to be slowing, an acceleration in the number of newly detected cases in other countries is raising alarm bells.

There’s been a large spike in infections in Italy, Iran and South Korea over the past week, with the number of cases in the latter surpassing 800 today. The worrying trend has deepened the risk-off mood with investors fleeing to safe assets such as gold and US Treasuries.

The precious metal jumped by more than 2% on the week’s first trading day to hit a new 7-year peak of $1685.87 an ounce, extending its year-to-date gains to almost 11%. Ten-year Treasury yields slipped to a 3½-year low of 1.377%, widening the gap with the 3-month yield and heightening recession fears amid no sign yet that the virus spread is being contained.

Equity markets finally appear to be catching up with the broader risk aversion, with stocks globally suffering heavy losses. In Asia, South Korea’s Kospi 200 was the worst hit, tumbling by almost 4% as the country raised the virus alert level to the highest following the huge increase in new cases there. Japanese markets are closed today.

In Europe, the main indices opened around 3% lower, while US stock futures were down between 2-3%, indicating traders are only just starting to come to terms with the reality that it will probably take far longer to bring the virus outbreak under control, meaning a far greater economic fallout than initially anticipated.

Worse-than-expected PMI numbers out of the United States on Friday may have provided the first evidence that the global economy is taking a hit from the growing epidemic, which is at risk of soon turning into a global pandemic.

US services activity unexpectedly contracted in February according to the IHS Markit’s flash PMI reading, sending the odds of Fed rate cuts surging. Investors have now priced in more than 50 basis points of rate cuts over the next 12 months, further pressuring Treasury yields.

However, although the greenback initially tumbled on the data, especially versus the euro and the pound – which were lifted by surprisingly upbeat PMIs in the Eurozone and the UK, the dollar was back on the front foot on Monday, falling only against the yen.

The Japanese currency seems to have restored some of its safe-haven allure, though persistent concerns about the outlook for Japan’s economy continue to hold it back when compared to its rivals such as the US dollar and Swiss franc.

Among the risk-sensitive currencies, the Australian dollar plumbed fresh 11-year lows, while the yuan stuck close to Friday’s 2½-month lows.