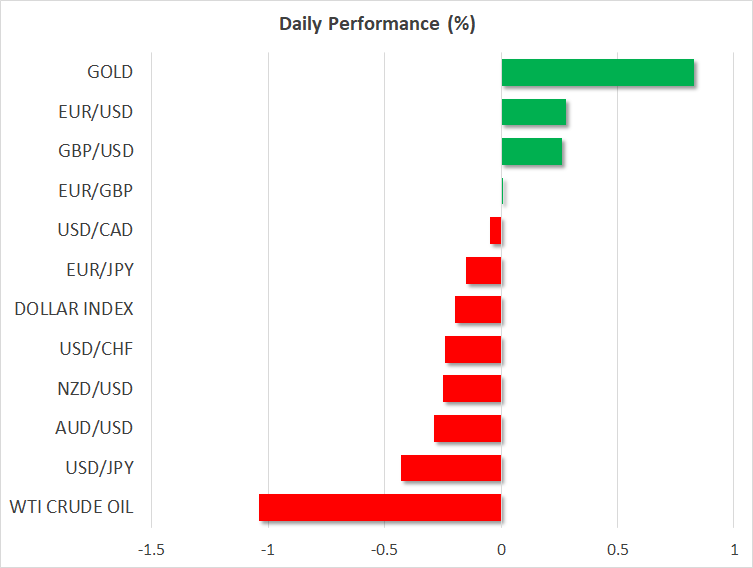 The risk-off mood deepened on Friday as China reported another spike in new confirmed cases of the coronavirus, most of which were in two prisons in Hubei province. But investors were also spooked by the sudden increase in the number of cases outside of China in recent days, particularly in South Korea. The worrying trend led more investors to safety, dumping stocks and Asian assets and flocking to US assets and gold.

The darkening cloud over Asia has not only hurt emerging market currencies in the region but traditional safe havens such as the Japanese yen amid growing fears about the worsening impact of the virus epidemic.

The yen took a sharp tumble mid-week but is attempting a rebound today after two days of heavy losses. But it’s recovery could be difficult as domestic data continues to point to a likely recession. Manufacturing activity in Japan was at its weakest in seven years in February according to the Jibun flash PMI as the disruptions caused by the virus outbreak took a toll on the economy.

The yen’s woes were a boon for the US dollar, however, as it was boosted by inflows of funds into US assets, mainly Treasury notes. This pushed the 10-year Treasury yield below 1.5% for the first time since September and lifted the dollar index to a near 3-year high of 99.91, taking it close to the psychologically important 100 level.

The greenback was softer today, last trading around 111.62 yen, having beached the 112 handle yesterday. However, gold managed to extend its bullish run, scaling fresh 7-year highs to reach $1635 an ounce.

The Dow Jones and S&P 500 briefly slipped to more than one-week lows yesterday before paring losses to end the day 0.4% lower. The Nasdaq Composite was down a steeper 0.7% as investors began reassessing the potential fallout from the coronavirus on US corporate earnings. US and European stock futures remained in the red today and most Asian indices were down sharply too.

However, Chinese equities were an exception once again despite the country being the epicentre of the epidemic. Stocks were supported by stimulus hopes as authorities promised more measures to help the economy cope with the virus outbreak.

The euro benefited from some rare positive data today as the flash PMI reports for February weren’t as bleak as anticipated. French services activity showed surprise strength while German manufacturing unexpectedly rebounded. The composite PMI for the Eurozone beat the top estimate to rise to 51.6 in February, easing some of the gloom about the bloc’s economic outlook.

The data helped the single currency recover from 3-year lows and reclaim the $1.08 level as it provided some hope that the Eurozone might be able to ride out the global virus fallout without taking a significant hit.

Flash PMIs are also due from the United States later and will likely continue to paint a solid picture of the US economy. Other American manufacturing surveys released earlier this week came in above expectations, suggesting the US so far remains immune to the virus impact, hence, the dollar’s elevated status as a haven currency.

The pound followed the euro higher, climbing back above the $1.29 level.

Elsewhere, the Australian and New Zealand dollars have been unable to catch a break, slumping further against the greenback. The aussie slid to a new 11-year low of $0.6583, while the kiwi came within a whisker of breaking below the $0.63 level. 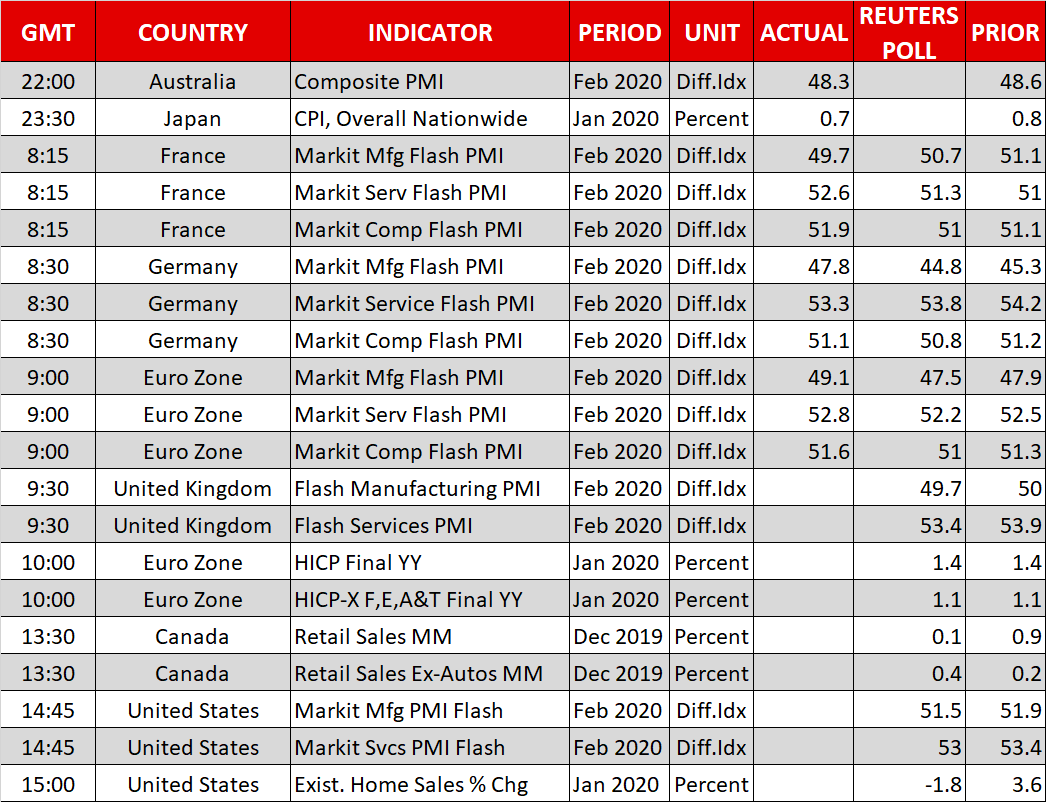