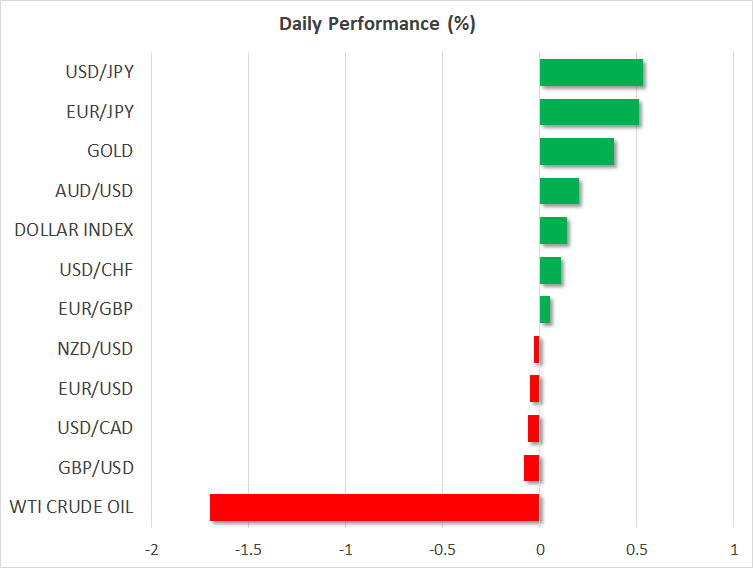 The US dollar appeared to lose some of its safe-haven allure on Monday as signs of economic life in many parts of the world shifted the focus to the improving growth outlook, putting pressure on traditional havens such as the yen and the Swiss franc. Investors shrugged off Friday’s horrific nonfarm payrolls report out of the US, which could go down in history as the worst ever as 20.5 million Americans lost their jobs, pushing the unemployment rate to 14.7% – the highest since the Great Depression of the 1930s.

But optimism that this is as bad as it gets led Wall Street higher on Friday with most of Asia following suit today and US and European stock futures pointing higher. The gradual lifting of draconian lockdown measures imposed in most countries since late March has revived hopes of a V-shaped recovery as businesses restart and people return to work.

Even the UK – one of the hardest hit in Europe by the coronavirus – is now moving towards easing its restrictions. But the baby steps announced by Prime Minister Boris Johnson yesterday to take Britain out of lockdown didn’t seem to impress the pound, which was down slightly against the dollar on Monday.

The euro also slipped versus the greenback, though both were firmer against the yen, which fell across the board. The dollar jumped 0.5% against its Japanese peer, hitting a more than one-week high.

Still, the risk-on moves were mild and the positive mood was not universal as commodities were headed in the opposite direction. Oil prices dipped about 2% as the partial reopening of economies around the world did little to alter the view that the demand picture won’t be changing anytime soon.

Gold has also not succumbed to the inflated optimism infecting stocks that everything is on the mend now that governments are relaxing social distancing rules and after the abundance of liquidity injected by policymakers.

The latest virus numbers in China and South Korea show a small surge in new cases detected on Sunday, highlighting the risks from the policy of easing lockdowns too early and raising fears of a possible second spiral in COVID-19 infections if authorities become complacent.

While investors aren’t yet including a second wave of infections in their recovery forecasts, the possibility is keeping gold well supported. The precious metal was last up 0.3%.

Also putting a slight dampener on the latest bout of optimism were comments by President Trump who on Friday cast doubt on the apparent progress being made in kick-starting the phase one trade deal signed by the United States and China in January. Trump said he was “very torn” and has “not decided yet” when asked about the trade deal by Fox News, suggesting the long-sought pact remains fragile, especially as election season approaches and the White House needs someone to blame for the devastation caused to the US economy by the pandemic.

Trump’s anti-China rhetoric may be putting the breaks on the Australian dollar, which has turned negative after being unable to hold on to earlier advances.

The kiwi was also down as a slump in electronic card retail sales in New Zealand in April raised expectations of more policy easing by the Reserve Bank of New Zealand, which meets on Wednesday.