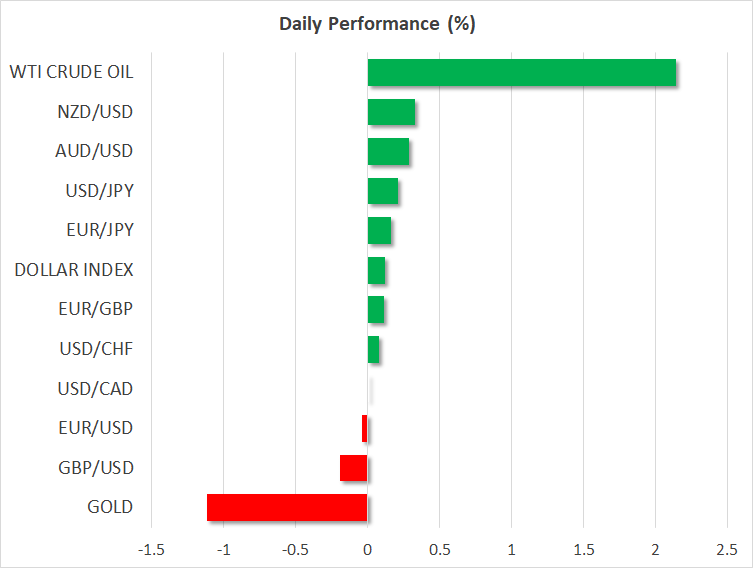 Powell says Fed is “grappling” whether to cut rates

Markets were dealt a reality check on Tuesday after Fed Chairman Jerome Powell signalled that a rate cut in July was not a done deal. Speaking in New York, Powell said he and his colleagues are “grappling whether these uncertainties will continue to weigh on the outlook and thus call for additional policy accommodation”. However, he also reiterated that many FOMC members see a “strengthened” case for policy easing, before adding that they do not want to “overreact to any individual data point or short-term swing in sentiment”.

The US dollar jumped higher on Powell’s remarks, climbing back above the 107 level versus the yen, while the euro lost ground below the $1.14 handle. The dollar index bounced back from 3-month lows to recover to around 96.25.

However, the greenback’s rebound was exaggerated as the currency was due a technical correction and the moves in bond and futures markets were more muted. US Treasury yields rose only marginally from their recent lows, but more significantly, a full 25 basis point cut is still being priced in by investors.

Powell may have put expectations of an aggressive 50 bps cut to bed, but markets seem certain that the Fed will still cut rates by 25 bps. The odds of a 50-bps reduction have fallen sharply from about 40% yesterday to around 22% today.

St. Louis Fed President, James Bullard, who is one of the most dovish members on the FOMC, further cast doubt on a big cut saying “I think 50 basis points would be overdone” in a Bloomberg interview on Tuesday.

But softer-than-expected economic data out of the United States on Tuesday reinforced the view that the US economy is slowing faster than anticipated. The US consumer confidence index unexpectedly tumbled in June and new home sales were sharply lower in May.

Powell acknowledged there had been a “significant” change in the global risk picture in recent weeks. And with uncertainty rising about a US-China trade deal as well as a possible military conflict with Iran, safe-haven favourites like the yen, franc and gold are likely to stay in demand in the coming weeks even as they fall back slightly today on profit taking.

US and Chinese officials continue to work behind the scenes to set the stage for the high stakes talks between Presidents Trump and Xi on the sidelines of this weekend’s G20 summit in Japan. The US has signalled it will not accept any conditions regarding the use of tariffs, but investors are hopeful that at the very least, the two leaders will strike some kind of a truce not to impose any additional tariffs and restart the trade negotiations.

As markets anxiously await the outcome of the G20 talks, US data on durable goods orders, due later today, and PCE inflation numbers on Friday will be on investors’ radar for more clues on the US economy.

Kiwi up even as RBNZ signals further rate cuts

The New Zealand dollar outperformed its peers today despite the Reserve Bank of New Zealand signalling lower rates in the future. The RBNZ kept rates on hold at its policy meeting today but indicated it may need to cut rates again to meet its objectives.

This wasn’t enough, however, to offset the even more dovish bets against the Fed and the kiwi extended its gains for an eighth straight day to climb to two-week highs above $0.6650.

In contrast, Bank of England governor, Mark Carney, is expected to reiterate the Bank’s tightening bias when he testifies before a parliamentary committee at 09:15 GMT. The pound though was on the backfoot today as Boris Johnson, the favourite to become the next British prime minister, stepped up his rhetoric of leaving the EU on October 31 with a “deal or no deal”.