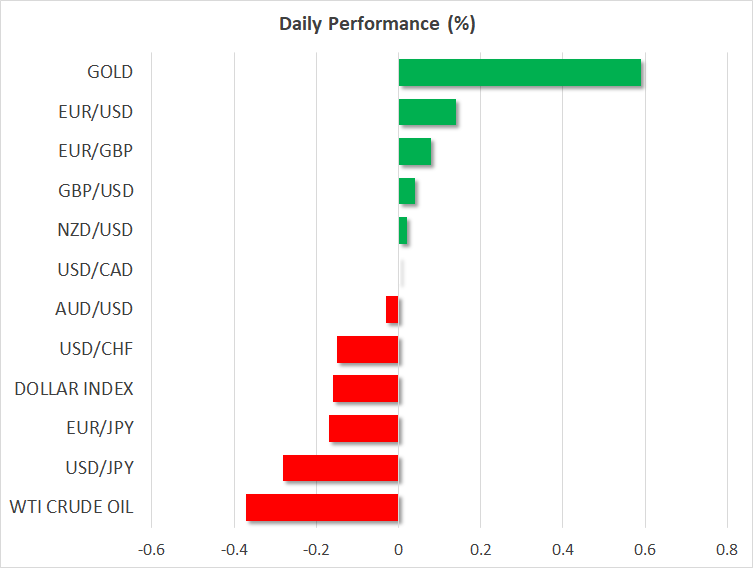 Euro caves in under the weight of disappointing industrial data

The world’s most traded currency pair continued its epic downfall yesterday, touching a low last seen in 2017 after a batch of weak industrial production numbers poured cold water on the hopeful narrative that the Eurozone economy is steadily recovering. Remember that around the turn of the year, many prominent strategists were calling for a material rebound in the euro area that would also push the single currency higher, ending the dollar’s dominance. That is looking more and more like a fantasy.

There are several elements to this. Clearly the quality of incoming European data has been dreadful, with growth barely positive in Q4 and few signs of a real turnaround in the new year, especially in the battered manufacturing sector. At the same time, American economic numbers – although having lost some of their shine as well – remain solid overall and definitely strong enough to keep the Fed from turning its sights to the rate-cut button for now.

With substantial interest rate differentials between the two economies as well, there’s a strong carry trade in favor of the dollar, as sub-zero rates in the Eurozone incentivize investors to use the euro as a funding currency. Another factor to consider is that the ECB is so divided that the prospect of any more monetary stimulus – for example bigger QE injections – looks unlikely, something that markets might ultimately view as a policy error.

For this negative euro/dollar narrative to turn around, either the Fed has to cut rates more aggressively than what’s already priced in to erode the dollar’s rate advantage, or European governments – especially Germany – need to announce a big spending package. Neither looks likely anytime soon, especially considering the emerging political vacuum in Berlin after the CDU party leader resigned. As such, the pain train for euro/dollar may not be over.

US stocks continued to rampage their way higher on Wednesday, with all three major equity indexes closing at new records yet again, fueled by optimism that the coronavirus risk was slowly fading into the background as the increase in new cases slowed. The defensive Japanese yen retreated alongside gold, while risk-sensitive currencies such as the aussie and loonie climbed in lockstep with commodity prices.

All this got flipped on its head overnight though, with these moves reversing after the latest virus numbers showed a sharp spike in both infections and deaths in China’s Hubei province, the epicenter of contagion. The yen is back in vogue, Asian stocks were a sea of red, and Wall Street futures point to an open that would wipe out yesterday’s gains.

That being said, there is no sign of panic among investors, in the sense that these moves have been orderly and relatively modest in size so far. This tranquility stems from the fact that most of the increase in new cases is owed to a change in methodology for counting infections in Hubei, not some dramatic acceleration in the spread of the virus. The new methodology makes it easier and faster for officials to classify a patient as infected.

However, caution lingers, because this could simply mean that Hubei officials were merely understating the real number of cases in recent weeks, and that the actual numbers are closer to what was reported today, casting doubt on ‘containment’ hopes. Attesting to this caution, euro/franc touched a low last seen in 2015 today, partly due to a collapsing euro and partly due to traders hedging some risk exposure after a strong run for stock markets.

As for today, we get CPI figures from the US, and we’ll hear from the ECB’s chief economist Philip Lane at 12:00 GMT. 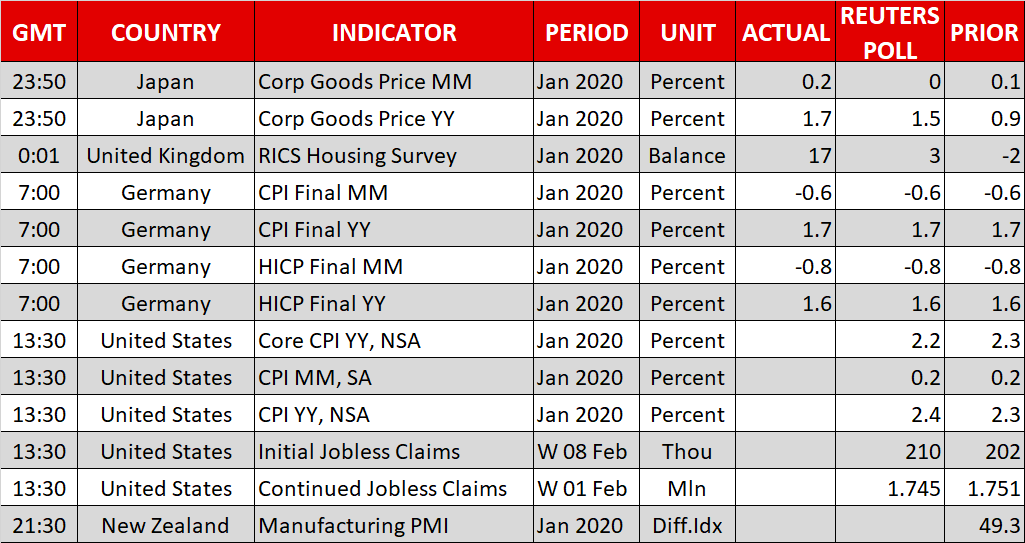