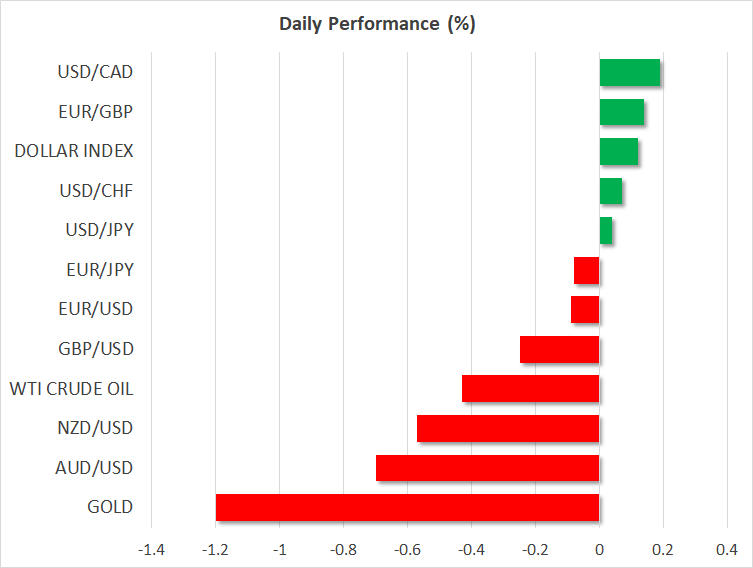 Markets were struggling to put up a positive front on Wednesday as the worsening virus outlook in Europe and the fading prospect of additional fiscal stimulus in the United States heightened recessionary fears.

The stimulus-infused risk rally appears to have fallen off a cliff at the start of autumn as reality has finally taken over from complacency, with many European countries having to make tough decisions on new virus restrictions and a divided US Congress unable to respond to the economic crisis.

The growing concerns about the recovery were echoed by Fed chief Jerome Powell who warned lawmakers on Tuesday that employment and economic activity remain “well below their pre-pandemic levels” and repeated his call for more fiscal support. Powell will be testifying again today, as well as tomorrow.

But Powell wasn’t the only Fed official attracting headlines yesterday. Chicago Fed President Charles Evans caught investors off guard when he signalled that the Fed may begin to raise interest rates before inflation starts averaging at 2%. Evans does not currently have a vote on the Fed committee but will become a voting member in 2021.

His remarks boosted an already fully loaded US dollar, which has surged to near 2-month highs against a basket of currencies. The yen also continued to capitalize on the negative sentiment, wiping out most of its summer losses against its main rivals.

Despite all the gloom, however, there was no overwhelming sense of panic as shares on Wall Street managed to post a decent rebound on Tuesday. US stock futures indicate those gains may carry through to today and European indices opened in positive territory.

However, the turnaround looks far from convincing and even if stocks are able to halt their downslide there’s not a lot on the near-term horizon that can refuel the rally. This is because the slowing recovery is not the only thing investors need to worry about.

The US presidential election is just weeks away and the tight race, combined with worries about fraud from postal voting, has sparked talk that whoever loses will contest the result, leading to a potentially prolonged period of uncertainty.

In addition, tensions between China and the US continue to simmer. President Trump used his address at the annual UN General Assembly to blame China for ‘unleashing’ the coronavirus onto the world. Meanwhile, there are growing signs that China will block the takeover of TikTok by US companies, possibly setting the stage for a major standoff.

The flash PMI releases for September confirmed what many had been fearing: Europe’s recovery is in trouble. While both France and Germany posted better-than-expected manufacturing PMIs, the services sector took a big hit from tighter restrictions as virus cases flare up again. The Eurozone’s composite PMI, which measures overall activity, fell to 50.1, suggesting growth is stalling.

The euro hit 2-month lows on the data, slipping below the key $1.17 support level. But the losses were nevertheless somewhat contained as the PMI report wasn’t all bad, with optimism for the year ahead improving slightly.

The pound also remained on the backfoot following a sharp three-day drop as the UK economy appears to be walking on thin ice after Prime Minister Johnson announced new curbs on Tuesday to try and contain the virus spread. The tougher restrictions include pubs and restaurants having to close at 10pm, which could knock back growth.

But for now, Britain’s recovery is holding up relatively better, with the flash composite PMI for September staying comfortably in expansionary territory at 55.7.

The Australian and New Zealand dollars were the worst performers on Wednesday with both currencies coming under pressure on rising expectations of further monetary easing by their respective central banks.

The Reserve Bank of New Zealand kept policy unchanged at its meeting today but signalled that more stimulus may be needed, with negative interest rates being one of the tools it is prepared to use.

But the biggest surprise this week has been the dovish turn by the Reserve Bank of Australia, which seems to have ditched its relatively optimistic view on the economy following comments by Deputy Governor Guy Debelle yesterday. His remarks have fuelled speculation that the Bank may cut rates as early as at the October meeting. 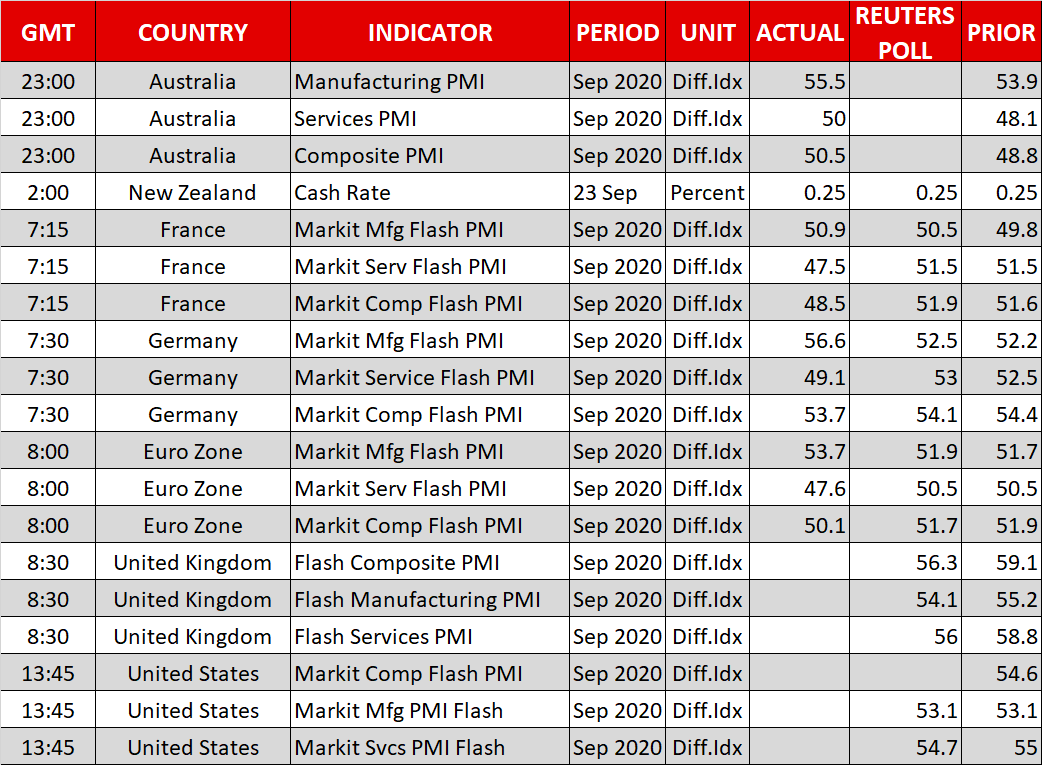