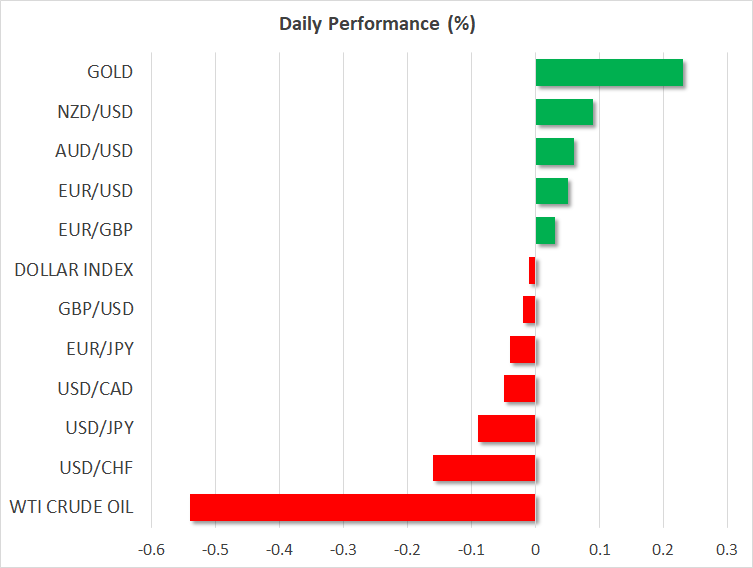 All eyes on Trump-Xi meeting

As the G20 summit gets underway in Osaka, Japan, investors’ attention is fixated on the much-anticipated meeting between US President Trump and Chinese President Xi as the two leaders attempt to mend their fraught relations. There’s a lot of uncertainty as to what the meeting, due to place on Saturday (0230 GMT), will produce, but the minimum outcome that traders are anticipating is for the two sides to restart the stalled trade negotiations and delay imposing any additional tariffs.

Such a result might help lift risk sentiment slightly as it would keep alive hopes of an eventual deal but is unlikely to significantly alter the global economic outlook and therefore do little to curb expectations of rate cuts by major central banks around the world.

In the event, however, of an unexpected breakthrough, the global growth picture would brighten substantially and lessen the need for monetary easing to boost stagnating economies.

The US dollar was marginally weaker but steady on Friday as traders warily awaited the headlines to emerge from this weekend’s crucial G20 talks. The dollar index was heading back towards the 96.0 level, while the yen strengthened slightly to 107.65 per dollar, having yesterday hit a one-week low of 108.15.

The cautious market mood helped gold increase its distance above $1400 an ounce after briefly dipping below the level yesterday.

Despite the uncertainties regarding what direction the Trump-Xi talks will take, the Australian and New Zealand dollars continue to scale fresh highs against their US counterpart. Expectations that the Fed will cut rates more aggressively than the RBA and RBNZ have driven the aussie and kiwi to multi-week highs over the last few days. The RBNZ kept rates on hold this week but signalled more cuts will be needed in the coming months, while the RBA is highly anticipated to lower its cash rate for the second meeting in a row when it convenes next week.

In equities, European and US stock futures were modestly higher but low expectations of the G20 summit pushed the main Asian indices to negative territory on Friday. Trump’s top economic advisor, Larry Kudlow, on Thursday said the President had not conceded to any preconditions for the meeting with Xi, contradicting earlier reports that suggested Trump had tentatively agreed to postpone any decisions on new China tariffs.

Eurozone and US inflation coming up

With inflation in both the United States and the Eurozone still very muted, the latest price indicators out of the two countries will be watched today as both the Federal Reserve and the European Central Bank debate whether to ease policy. The Eurozone’s flash inflation numbers for June are due at 0900 GMT and the core PCE price index out of the US will be released at 1230 GMT, along with personal income and spending figures.

The euro has been struggling to make a decisive break above $1.14 even as the dollar has been on the retreat as expectations that the ECB will loosen policy soon has capped gains.

The pound has also not been able to take full advantage of the weaker dollar and has slipped back below the $1.27 level on growing fears that Boris Johnson – the next likely prime minister of the UK – would allow a disorderly Brexit. Rising risks of an early general election that could bring Labour into power are also weighing on the British currency.

In other data to keep an eye on today, Canadian monthly GDP numbers for April will be important, as well as the Bank of Canada’s quarterly business outlook survey as the Canadian dollar surges to 5-month highs on diminishing expectations that the BoC will follow the Fed in cutting rates. 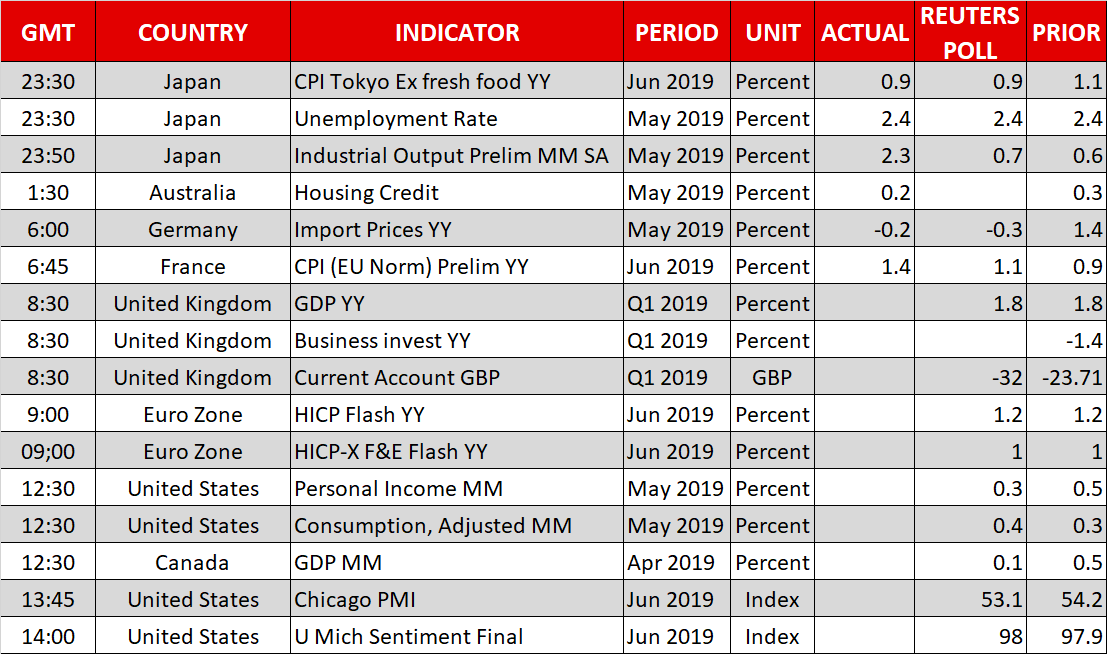