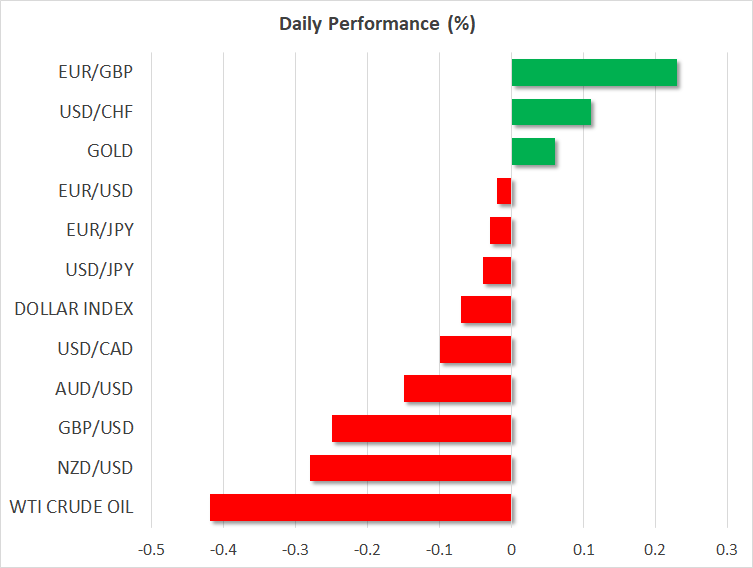 A worrying increase in the number of new COVID-19 cases in several locations around the world appears to have put the brakes on the risk rally that just a few days ago seemed unstoppable. Six states in the United States have reported a record number of new coronavirus cases in the past few days, while Beijing has cancelled hundreds of flights as it struggles to contain the latest outbreak in the Chinese capital.

Tokyo and a number of countries in the Middle East are also seeing a resurgence of the virus, raising fresh fears that a major second wave may be impossible to prevent. Although all the indications are that there is no appetite for nationwide lockdowns should virus cases spiral again, the possibility of a second wave has nevertheless started to unnerve investors as it would still upset their calculations of a V-shaped recovery.

Even if there is no second outbreak, hopes of a strong and fast recovery are doubtful as there is little to suggest that consumption would return to pre-Covid levels across the economy while safety guidelines are in place.

Dollar and yen reenergized; stocks run out of steam

The prospect of a slow recovery was again underlined by Fed Chair Jerome Powell on his second day of testimony before Congress on Wednesday and markets may finally be taking note. Wall Street turned lower before the close yesterday and stock futures point to more losses today.

The fact that the pause in the equities rally comes just as retail sales in the US bounce back at a record pace suggests investors are becoming less confident about the outlook and want to see more evidence that the economic rebound is sustainable before going on another buying spree.

The cautious mood was apparent in the currency markets too, with the US dollar advancing broadly over the past two days, though it was slightly softer today. The yen on the other hand continued to keep its major peers on the backfoot, with euro/yen brushing two-week lows.

The euro also struggled against the greenback as it looked increasingly unlikely that EU leaders will be able to reach an agreement on a virus rescue fund at Friday’s Council meeting. The postponement of a decision suggests member states remain far apart on the composition of a fiscal recovery package, meaning that once again an eventual deal may be too little too late.

The pound didn’t fare much better on Thursday as it caved in to the risk-off mood, though it remained supported above $1.25. Investors anticipate the Bank of England will add at least another £100 billion to its asset purchase program when it announces its policy decision at 11:00 GMT as the UK economy is expected to take a big hit from the virus crisis.

The Swiss National Bank kept its interest rates unchanged earlier today and confirmed that it had been very active in the FX market since March, though the franc was mostly flat on the day.

Also feeling the strain on Thursday were the Australian and New Zealand dollars as weak domestic data knocked the antipodean currencies. Australia reported much larger-than-expected job losses for May, dashing hopes of a swift rebound in the labour market, while New Zealand’s economy suffered a much steeper decline in Q1 GDP than forecast, underscoring the RBNZ’s dovish stance.

With a global recovery beginning to look a bit shaky, investors will be closely watching the latest weekly jobless claims due out of the US later today. 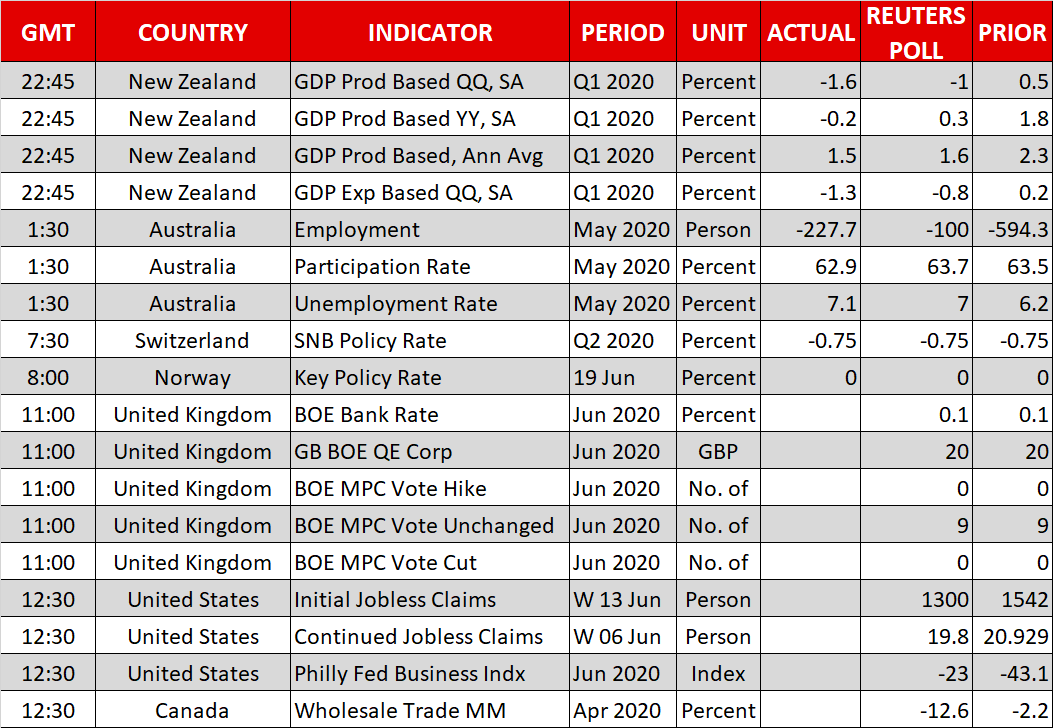