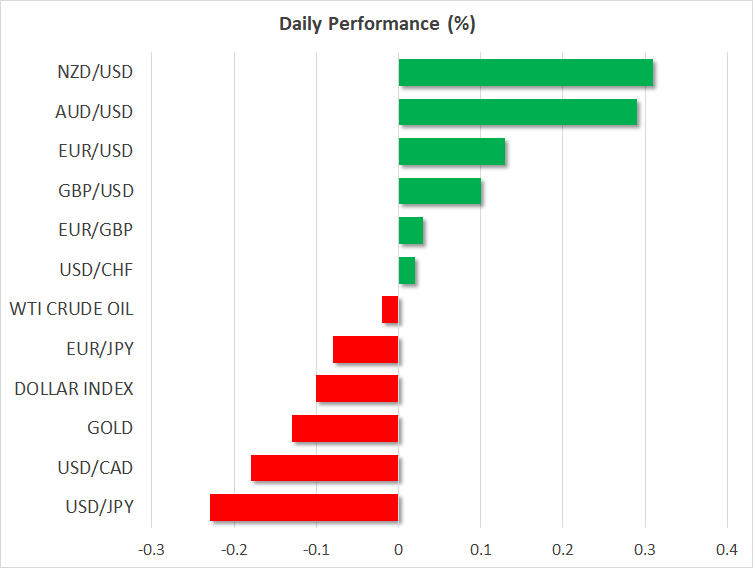 All quiet on the FX front

It was a relatively subdued session in global markets yesterday with US traders being away on holiday. Most stock indices closed flat and currency pairs generally traded in narrow ranges, with no real headlines to steer the price action and volatility in short supply.

The dollar remains near its recent lows, unable to stage a successful rebound even amid continued disagreements on the EU budget and reports that Brexit talks are stuck in the mud. The showdown between Poland and Hungary against the rest of the EU seems to be escalating, though this has not really trickled into the euro yet.

It could be that investors view this standoff as just another drama in the endless European soap opera, which ultimately will be resolved but only after lots of kicking and screaming.

What’s next for euro/dollar?

For now, it is difficult to envision much further upside in euro/dollar from here. The pair is trading in the region above $1.19 again but without a breakthrough in the Brexit saga or another tsunami of QE by the Fed next month, it is hard to see what will push the price even higher, especially with the ECB ‘defending’ the $1.20 handle lately.

Relative EU/US economic performance and FX positioning are two other elements to consider. Gone are the days when Europe was expected to ‘out-recover’ America. The euro area will almost surely contract sharply again in Q4 due to the lockdowns, whereas the US may suffer much less growth-wise. Additionally, while long-euro speculative positions have been unwound a little lately, they remain at stretched-long levels.

The bottom line is that euro/dollar has been stuck in a range between $1.16 to $1.20 for four months now, and an upside break doesn’t look imminent here without some jet fuel from Brexit or the Fed.

In the latest escalation in trade tensions, China slapped tariffs on Australian wine today ranging from 107% to 212%, which is a staggering amount. The move follows a series of intensifying hostilities between the two trading partners, with China furious that Australia supported a global inquiry into the origins of the coronavirus.

About one third of all Australian exports go to China, so this diplomatic brawl could have dire economic implications. The aussie hasn’t reacted much to all this and continues to ride the vaccine euphoria, but this is still something to keep a close eye on. Australia literally relies on China to absorb its exports, so the aussie might not stay immune for long if this skirmish worsens.

In the commodity theatre, gold prices seem to have established a short-term floor just above the $1800 region and the 200-day moving average. For now, bullion’s fate lies with the Fed’s next move and the rollout of vaccines. If $1800 is violated too, there may be stronger hands waiting around the $1750 zone.

Meanwhile, crude oil is taking a breather, waiting for Monday’s OPEC meeting. A sell-the-fact reaction seems quite likely if the cartel only delivers the simple three-month extension that markets have largely priced in already.

Today, all eyes will be on the Brexit saga. EU negotiators will travel to London for talks, so headlines over the weekend and gaps in sterling on Monday are certainly plausible. The latest updates suggest there hasn’t been any progress lately, though some political intervention from Boris Johnson could change that.

Finally, US markets will only open for a half day, so liquidity will be thinner-than-usual. 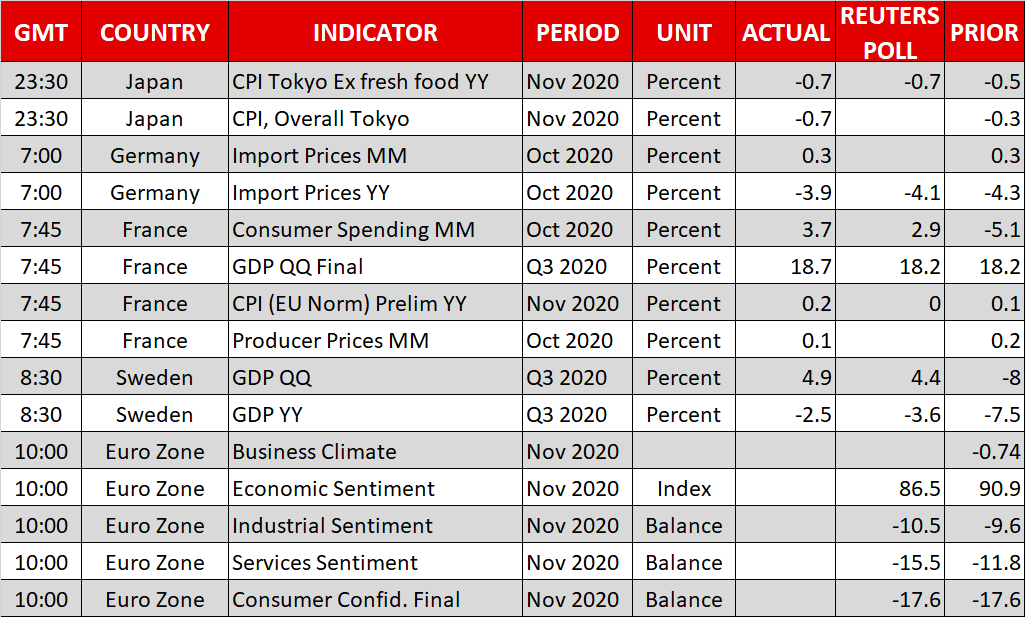