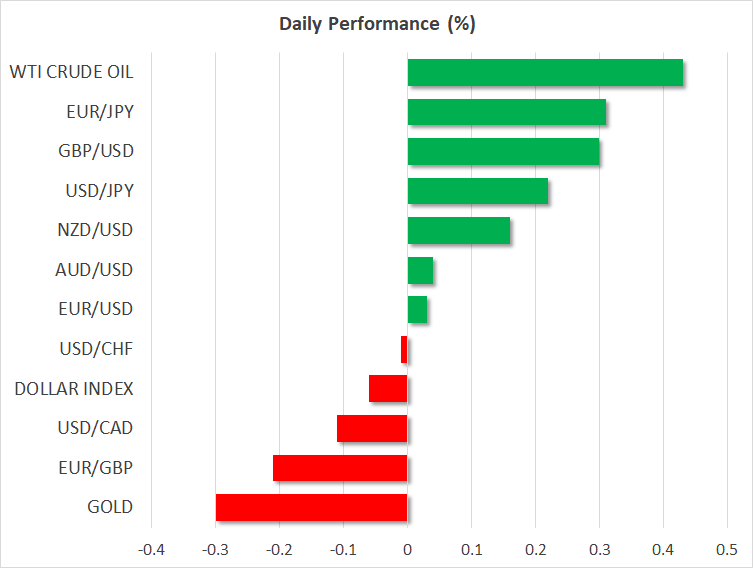 The world’s reserve currency outperformed on Friday, after the preliminary US Markit PMIs for November rose by more than anticipated, prompting traders to scale back bets that the Fed will cut rates in the coming months. Markets now assign only a one-in-four chance for another cut by March, according to pricing derived from the Fed funds futures.

The dollar’s gains were amplified by a weaker euro, which came under selling pressure after flash Eurozone PMIs disappointed, highlighting that growth in the region remains frail as the sickness in manufacturing increasingly spills over into services.

Although the market is slightly retracing on Monday, with euro/dollar recovering some of its losses, the overall risks surrounding the pair remain tilted to the downside. Even accounting for its mild slowdown lately, the US economy is still on a much stronger footing than the euro area, and interest rate differentials clearly argue in favor of the higher-yielding dollar. For this story to change, markets may need signs that the Fed will start cutting rates with a passion, or that Germany will roll out a large fiscal stimulus package – neither of which is likely anytime soon.

Sentiment in global markets remains in limbo, flipping from risk aversion to risk-seeking, as conflicting trade headlines keep investors guessing. Weekend reports suggest China will raise penalties on violations of intellectual property rights, something that the US has long pushed for in the negotiations.

That saw a ‘risk-on’ mood return, with stock markets in Asia and Europe being a sea of green, and futures pointing to a higher open on Wall Street today. In Hong Kong, the Hang Seng index gained 1.5% after a district council election saw the pro-democracy movement score a landslide victory, in what was seen as a de-facto referendum on Beijing. Across the risk spectrum, the defensive Japanese yen and Swiss franc are both on the retreat, alongside gold prices.

Looking ahead, investors will likely remain on edge about whether a ‘phase one’ deal can be signed soon, and much may depend on any signals about whether the next round of US tariffs – scheduled for December 15 – will ultimately be postponed.

The British pound was another ‘victim’ of soft PMIs on Friday, with the currency retreating after the composite PMI – released for the first time – unexpectedly fell into contractionary territory. The survey noted that the UK economy is on track to shrink by 0.2% in Q4, with the upcoming election adding to Brexit-related worries about the outlook.

This would typically argue for a Bank of England rate cut soon but markets remain skeptical, assigning only a 50% chance for a cut by March, which seems fairly low. Perhaps the thinking is that the Bank may wait until the election fog clears before acting, so it can have a better idea about how much fiscal stimulus will be injected into the economy.

As for the pound, it’s all about incoming opinion polls right now, as traders gauge whether the Tories will have a strong enough showing to secure a stable majority in Parliament and implement their Brexit agenda. The latest polls show the Conservative party polling at 40-43% and consolidating its lead, a pattern that would argue for a stronger sterling if it persists over the next few weeks.