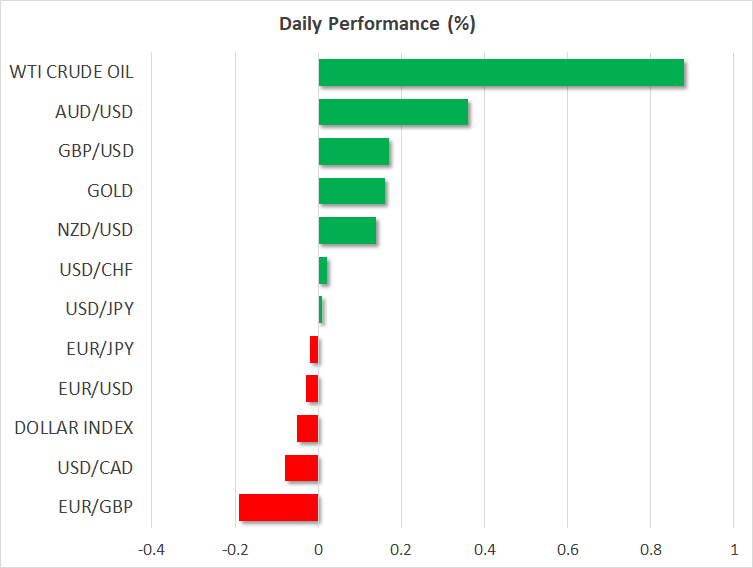 Markets undeterred by stimulus setback, see a deal in the offing

Equities got off to a positive start on Thursday following a strong performance on Wall Street yesterday where the three main indices notched up gains of between 1.7% and 1.9% to close at their highest in five weeks. The debate about a fiscal stimulus deal in the United States continues to set the market theme amid ongoing wrangling in Washington.

After President Trump abruptly killed off the chances of an imminent deal on a new virus relief package, there are hopes that an agreement on some kind of aid for COVID-stricken industries can be made before the November 3 election.

House speaker Nancy Pelosi and Treasury Secretary Steven Mnuchin spoke on Wednesday to discuss a $25 billion bailout for airlines. But as far as a broader deal is concerned, unless the President was to change his mind (which cannot be ruled out), it will have to wait until after the election.

Biden poll boost may not be a bad thing

Given the risk to the US recovery of a delay in additional fiscal spending, markets should be more worried. Yet, there is no sense of panic and the market gyrations this week have been quite muted compared to the volatility that investors have become accustomed to during the pandemic.

The relative calm is possibly a reflection of the shifting expectations about the election outcome as Democratic presidential candidate Joe Biden has widened his lead over Trump in the latest polls. Although a Biden win in November brings with it certain risks, such as higher taxes and increased regulation down the line, the immediate antidote for the US economy is additional fiscal stimulus and Democrats can provide that.

Ultimately, though, what will matter the most is who gets to control Congress and whether Democrats can win a majority in the Senate as a Biden presidency with Republicans running the upper chamber will hardly be the solution many are hoping for.

Another reason why markets are in a more buoyant mood today is that investors finally got their first clue from the Fed about future policy action. The FOMC minutes for the September meeting indicated that policymakers may begin discussing whether to increase their bond purchases as early as the next gathering in November.

However, the minutes also pointed to hesitancy towards providing more explicit forward guidance – something the markets have been calling for – and this appears to have driven up Treasury yields across the curve. The 10-year yield hit a four-month high yesterday. If this trend continues, the Fed may have no choice but to revise its forward guidance sooner rather than later.

There was little reaction, however, to the rise in yields or the minutes in the currency markets where risk sentiment was the primary driver. The US dollar declined steadily from the highs it posted in the aftermath of Trump’s decision to end the stimulus talks. The yen was also in broad retreat as risk appetite firmed.

The euro was steady around $1.1760 ahead of the minutes of the ECB’s September meeting due at 11:30 GMT. The biggest mover, though, was the New Zealand dollar, which tumbled in the early Asian session on reports that the Reserve Bank of New Zealand is ‘actively working’ on negative rates according to an unnamed official.

Even the pound headed higher, with investors still pinning their hopes on some kind of a Brexit trade deal despite Boris Johnson threatening to quit the talks if a deal is not in sight by October 15. The EU has repeatedly been attempting to extend the negotiations as wide differences remain in areas such as fisheries and level playing field.