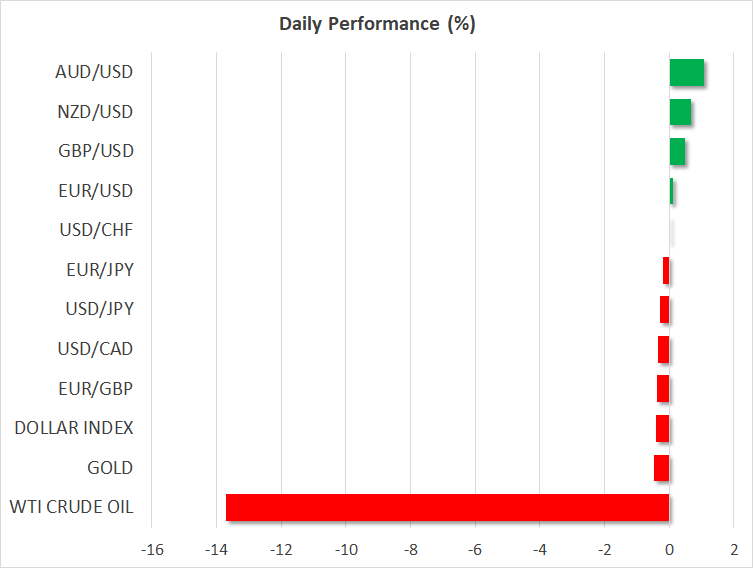 Light at the end of the lockdown tunnel?

It was a buoyant start to the week as signs that the draconian lockdowns that have paralysed major economies around the world are about to be loosened lifted risk appetite. The US dollar, which has been the safe haven of choice during the COVID-19 crisis due to it being the world’s most liquid currency, gave way to its key rivals on the first trading day of the week.

The dollar index slipped by 0.4% as the euro and pound recovered from last week’s lows. Both pairs were trading comfortably above the $1.08 and $1.24 levels, respectively, ahead of the European open. The euro dropped to one-month lows on Thursday after flash PMIs pointed to a collapse in services activity in April and the EU’s 1 trillion-euro virus recovery plan failed to impress investors. But with Europe’s powerhouses – Germany, France, Italy and Spain – beginning to relax some of the virus curbs, there is optimism that the economic carnage due to be confirmed in Thursday’s preliminary Q1 GDP reading won’t drag on for much longer.

The pound is up for similar reasons as there is speculation that Prime Minister Boris Johnson, who returns to work today following his recovery from the coronavirus, may announce some easing in the UK’s restrictions later this week.

In Australia, where the number of new daily virus cases has fallen to below 50 over the past week, the government is taking only small steps in removing the lockdown measures. Nevertheless, the local dollar has rallied to a more than 6-week high on hopes that Australia can avoid a sharp economic contraction.

Stocks surge but oil prices may be better reflection of reality

But is this newfound optimism based on scientific facts or false hopes generated by the premature reversal of the painful shutdowns? Stocks seem to think it’s the former. Major indices in Europe jumped by about 2% at the open and US stock futures suggest Wall Street will open at least 1% higher.

While it’s true that the ample supply of monetary and fiscal stimulus and signs that the earnings season is not looking up to be quite as disastrous as feared are propping equities at the moment, there’s still a risk investors are getting ahead of themselves by thinking that the worst is over. Even if more countries join in lifting some of the lockdown measures, it will be weeks, if not months, before most businesses can return to what can be considered normal operations. What’s more, the toughest restrictions are likely to be re-imposed on the first sign of a second wave of an outbreak, and without a vaccine, many of the social distancing rules could stay in place indefinitely.

That prospect continues to weigh on oil prices, which have tumbled by another 13% today. The sector has been dogged by an acute shortage of storage capacity as demand faces a cataclysmic collapse.

The yen rose against the dollar on the back of the greenback’s broad weakness but was down against the likes of the pound, aussie and kiwi as the Bank of Japan announced an increase in asset purchases at its policy meeting today. The BoJ joined the Fed in pledging unlimited purchases of government bonds as part of efforts to cushion the economic impact of the coronavirus pandemic

The Fed is scheduled to hold its next meeting on Wednesday but is not expected to announce any new measures, having already fortified its stimulus program several times since the start of the crisis. But following the failure of EU leaders to come up with a substantive virus rescue package, there is pressure on the European Central Bank to do more to help stricken Eurozone economies when it meets on Thursday.

Rumours that the ECB is about to increase the size of its Pandemic Emergency Purchase Programme (PEPP) by up to 500 billion euros is contributing to the positive euro sentiment today and so the stakes are high if policymakers disappoint.