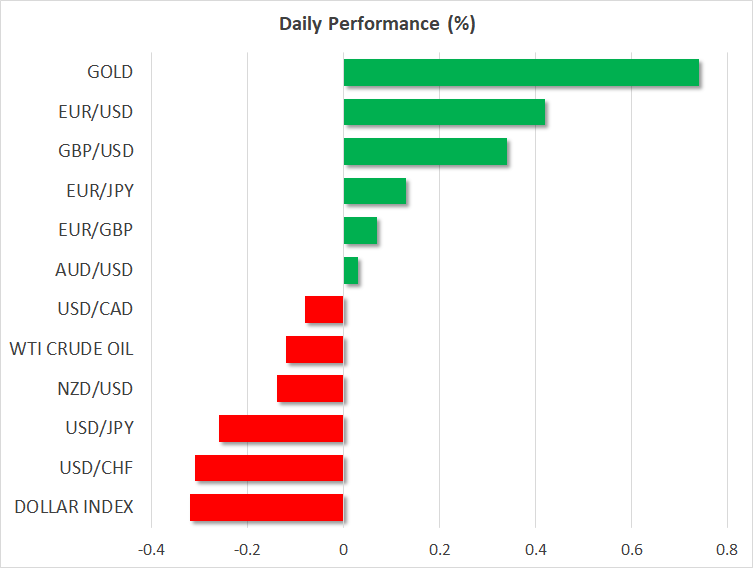 The Trump administration and Democrats appear no closer to finding a compromise deal on a new virus relief package as the latest efforts to kick start the negotiations prove fruitless. Talks between the two sides have been at a stalemate since last week when Republicans and Democrats failed to agree on a new round of fiscal measures to support the US economy just as existing benefits expired at the end of July.

President Trump has signed executive orders to provide a stopgap while lawmakers bicker over what the next bill should look like. But there are question marks about the legality of the White House’s move to extend the key $600/week unemployment insurance. Even if Trump’s reduced $400/week lifeline for millions of jobless Americans gets the go-ahead, it may take several weeks before it reaches people’s pockets and without the approval of additional spending by Congress, there may only be enough funds to finance five weeks of payments.

However, despite the uncomfortable prospect of a long delay before the United States gets its next big injection of fiscal stimulus, and possibly not before the presidential election in November, there is little panic in the markets, with most investors betting on some kind of a deal sooner rather than later.

The fact that both parties have not shut the door to fresh talks underlines this view, though in the short term, the lack of progress is dragging Treasury yields lower as the temporary stoppage of payments could still have a devastating impact on consumer spending. The US dollar followed yields lower, sliding against the yen, euro and pound.

Gold made up for lost ground on Thursday, making its way up to the $1,930/oz region after tumbling as low as $1,864/oz yesterday. However, the precious metal’s rebound was more to do with the lift emanating from the weaker greenback than safe haven demand as the overall market was only mildly in risk-off mood.

European shares opened slightly in the red (with the exception of London’s FTSE 100, which was down a much sharper 1%), while US stock futures pointed to small losses on Wall Street later today. The S&P 500 came within a whisker of February’s all-time high yesterday, closing at 3.380.35, after stocks got a major boost on Russia’s announcement of a vaccine for COVID-19.

Although many experts are sceptical about the effectiveness of the Russian vaccine – the first to be approved in the world – its arrival nevertheless heralds the start of the first of many vaccines likely to be getting the green light over the coming months.

US-China tensions and US data to be markets’ main focus

In the meantime, increasing signs that the economic recovery around the world will be a bumpy one are fuelling expectations that further monetary and fiscal stimulus support is inevitable, which together with the hopes for a vaccine are creating the perfect combination for risk assets.

A slowdown in America’s virus infection rate is also supporting risk sentiment, even though there are some concerns about the recent flare-up in new cases in Europe. But despite some tightened restrictions in several countries in Europe and elsewhere in recent weeks, investors remain optimistic about the growth outlook.

That optimism will be put to the test, however, when the US releases the latest weekly jobless claims later today and retail sales data for July tomorrow.

Washington’s relations with Beijing will also move back to the fore in the coming days when US and Chinese negotiators are due to meet to discuss the implementation of the ‘phase one’ trade deal as well as the White House’s war on China’s tech giants, TikTok and WeChat.

There’s only been a muted response so far in the markets to the latest escalations in tensions between the two superpowers so it will be interesting to see how much lower relations will have to sink before investors begin to take notice.