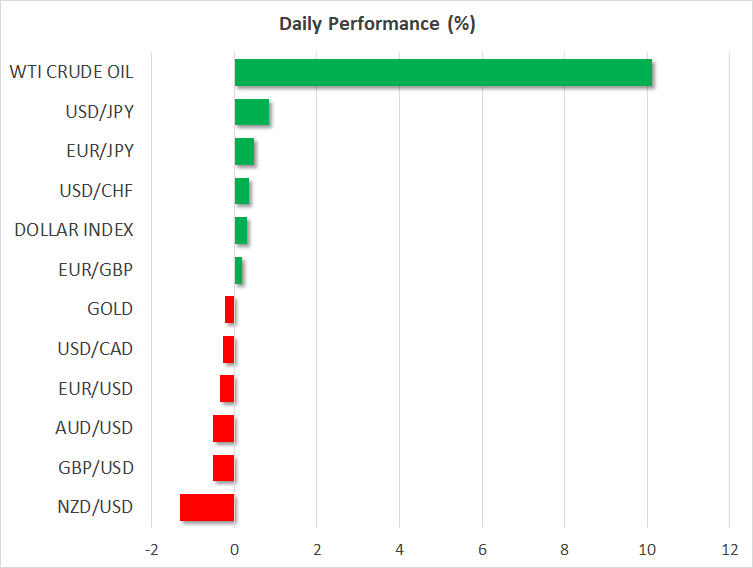 The market turmoil over the growing coronavirus pandemic continues to deepen with investors ramping up their stockpiling of cash, with the panic sell-off leaving no casualties, not even traditional havens such as gold and government bonds. Unsurprisingly, the sole beneficiary of this move is the US dollar, which, as the world’s reserve currency, is considered to be the most liquid.

The dollar rallied across the board on Wednesday, with its index against a basket of currencies skyrocketing to three-year highs. Even the yen has been sliding versus the greenback and today broke through the 109 level, having appreciated to the 101 area just 10 days ago.

The rush for liquidity has been detrimental for equities as no amount of stimulus appears to be able to calm frightened investors. The S&P 500 fell by 5.2% yesterday, while the Dow Jones plunged by another 6.3%, wiping out all the gains made after President Trump came to office.

A series of rate cuts by major central banks, as well as injections of liquidity and new asset purchase programs have so far failed to bring order to the markets. This suggests the problem at heart is not just about fiscal and monetary support to counter the virus fallout but also the lack of political leadership. The delayed response by the United States and European countries to add urgency to their fight against the virus probably undermined investor confidence at a time when the world economy is facing an unprecedented crisis.

However, with most countries now stepping up their virus response tactics and central banks expanding their interventions, the stock market sell-off may finally be easing. The European Central Bank and the Reserve Bank of Australia became the latest central banks in the last 24 hours to announce special measures.

The ECB held another emergency meeting yesterday and decided to buy 750 billion euros of public and private sector securities until the end of 2020, bringing its total asset purchases for the year to 1.1 trillion euros. Soon after, the RBA cut its cash rate to a record low of 0.25% and launched its first quantitative easing program, whereby it will target the 3-year yield of Australian government bonds at around 0.25%.

Adding to the slight uptick in risk sentiment, there appears to be some movement in Capitol Hill in reaching a deal on a $1 trillion fiscal package, possibly as early as the beginning of next week.

Shares in Asia pared earlier losses as the market tone improved and US and European stock futures turned positive. Things were also a lot calmer in the bond markets following the sharp sell-off in recent days. Sovereign bond yields have jumped on the prospect of increased government borrowing but what was more alarming was the spike in Eurozone periphery yields following the recent remarks by ECB chief Christine Lagarde that it’s not the Bank’s job to tighten the spreads. Italian 10-year yields, which yesterday soared to 3%, plunged to around 1.6% after the ECB’s new stimulus package, with Lagarde pledging that there are “no limits to our commitment to the euro”.

Other safe havens, meanwhile, were struggling for direction, with the yen mostly weaker and gold hovering near recent lows after failing to close above the $1,500 an ounce level yesterday.

Pound and others trampled by dollar surge

There was no respite for the battered pound on Thursday despite the improved mood. Cable plummeted to its lowest since 1985 on Wednesday, when excluding for the flash crash of October 2016, and last stood at $1.1570. The pound is perceived to be a riskier currency under the current climate as the UK’s large current account deficit, uncertainty over Brexit and a soon-to-balloon government deficit, not to mention doubts about Boris Johnson’s handling of the virus outbreak, do not bode well at all.

Similarly, risk-sensitive currencies such as the Canadian, Australian and New Zealand dollars have also been underperforming as their dependency on global trade and commodity prices make them additionally vulnerable to the deteriorating economic outlook. The aussie briefly slipped below $0.56 earlier today for the first time since 2002, while the loonie touched a 4-year low of C$1.4667.