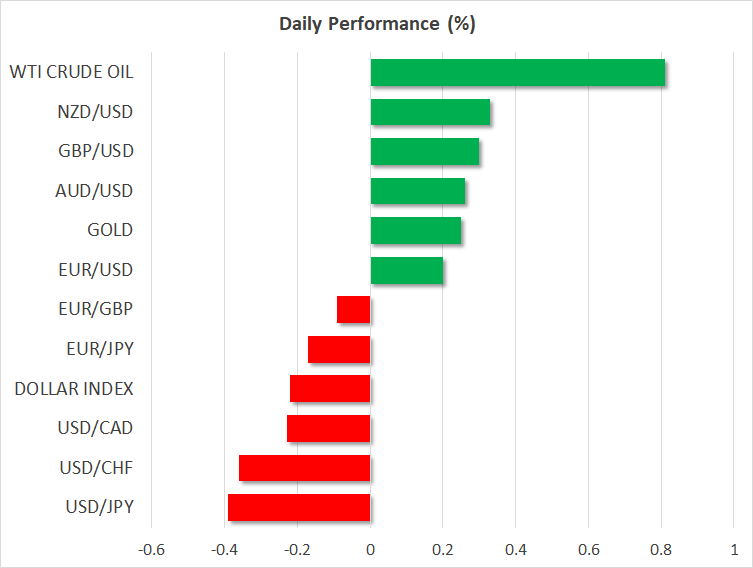 Powell testimony all but confirms rate cut in July

Markets were in buoyant mood on Thursday as Fed Chairman Jerome Powell gave his strongest indication yet that the Federal Reserve will slash interest rates at the July 30-31 meeting. On his first day of testimony before Congress on Wednesday, Powell said that since the June meeting “uncertainties around trade tensions and concerns about the strength of the global economy continue to weigh on the U.S. economic outlook”. Given that many FOMC participants saw a stronger case for monetary easing at the June meeting, the increased uncertainties since then can only be taken as a sign that the Fed will use this month’s meeting to make an insurance cut.

The minutes of the June FOMC meeting published a few hours after Powell’s testimony further reinforced the Fed’s dovish tilt. However, there are some doubts as to how far the Fed will go in cutting rates as the minutes highlighted some participants did not yet think there was a “strong case” for a cut, suggesting they may resist aggressive policy easing until they see more evidence of a severe slowdown in the US economy.

Dollar reverses lower, euro up ahead of ECB minutes

But the lack of clarity about Fed policy beyond July did not appear to worry investors as the overall dovish tone of the Fed chief was enough to revive expectations of a sharper 50 basis point cut this month. Odds of a 50bps cut surged to more than 25% today from near zero prior to Powell’s speech to Congress.

The move in fed funds futures lifted bond prices off their lows following last week’s robust jobs report, driving yields back down again and pressuring the dollar. The dollar index came off the three-week highs it hit earlier this week to drop below the 97.0 level. Against the yen, the greenback fell around 100 pips and was last trading just above the 108 level.

The dollar’s sell-off came as a relief to the beleaguered euro, which has been struggling to hold onto the $1.12 level on expectations that the European Central Bank could soon ease policy. The ECB will publish the account of its June policy meeting at 11:30 GMT and could signal that Governing Council members are moving closer to approving a new stimulus plan.

There will be more from Powell as well later today as he will be testifying before the Senate Banking Committee at 14:00 GMT. Although he’s unlikely to add anything new to yesterday’s remarks, the dollar will likely remain in the spotlight as the latest CPI report is also due out of the US at 12:30 GMT.

The pound shot above the $1.25 level as the dollar slid, helping it recoup some of its recent losses. The British currency was earlier boosted from a fairly solid set of data on UK GDP and industrial output. But given the weakening outlook and the Brexit chaos, it will be difficult for the pound to post sustained gains.

The Canadian dollar, meanwhile, headed back towards last week’s 8-month highs versus the greenback despite the Bank of Canada sounding concerned about the risks from the global trade tensions at its policy meeting yesterday. The BoC also played down the recent improvement in Canada’s economy, attributing it to temporary factors. But the somewhat more downbeat-than-expected tone couldn’t outweigh the effects of the looming rate cuts in the US, putting the loonie on course to challenge fresh highs in the near term.

Stocks cheered Powell’s rate cut hint, with the leading indices on Wall Street closing at or near record highs. The S&P 500 briefly crossed above the 3,000 level for the first time before ending the day at 2,993.07. Gold also spiked higher, extending its gains above the $1,400 level as Treasury yields fell back.

But one unexpected casualty of Powell’s remarks was Bitcoin. The Fed chief put a dent in Facebook’s hopes of launching its own digital currency – Libra – anytime soon, saying it “cannot go forward” unless Facebook addresses some issues such as money laundering.

Bitcoin tumbled by more than 14% after Powell’s remarks as the launch of Libra was seen as broadening the appeal of other cryptocurrencies like Bitcoin. 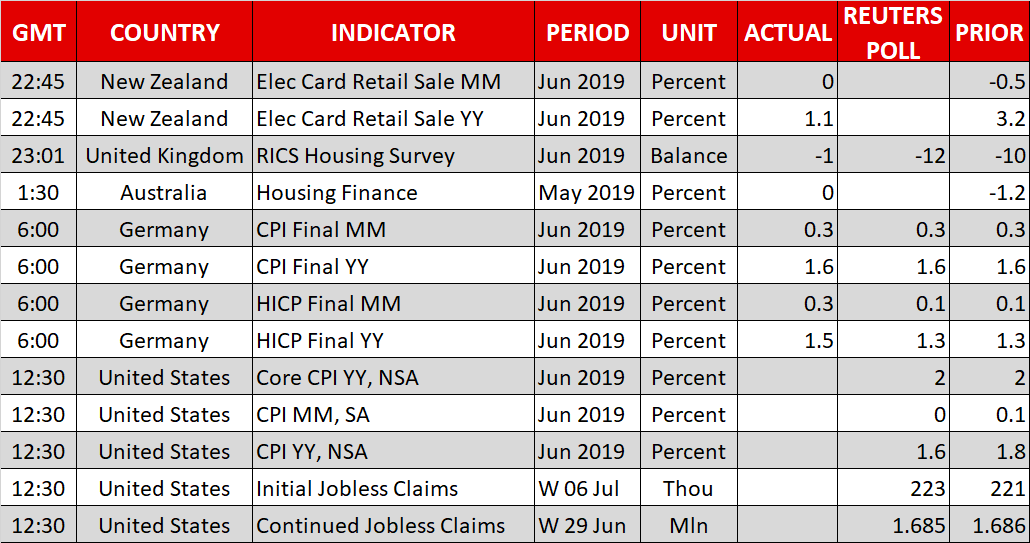